Video: Tiger on the loose in Doha

Shocking video emerged yesterday of a tiger on the loose on the streets of Doha – a timely reminder of the dangers of keeping wild animals.

Alarming videos and pictures were shared on social media yesterday after a tiger was seen roaming on one of Doha’s main highways.

The animal is seen falling from a truck in one video, and is then filmed roaming through traffic in the Al Rayan area of Doha:

This video shows the moment the tiger fell from the truck – thankfully, the animal appears to be relatively unharmed:

The Doha authorities have said they now have custody of the animal.

Prominent Emirati commentator and columnist Sultan Al Qassemi shared the video to his 427,000 Twitter followers yesterday to comment on the domestication of exotic animals in the GCC:

This obsession of keeping wild animals by rich kids in the Gulf has gone too far. via @AbdallaTaryam pic.twitter.com/mUUqQATaAE

Subsequent video show a man reaching underneath a red SUV and putting a chain around the tiger’s neck before leading it away. 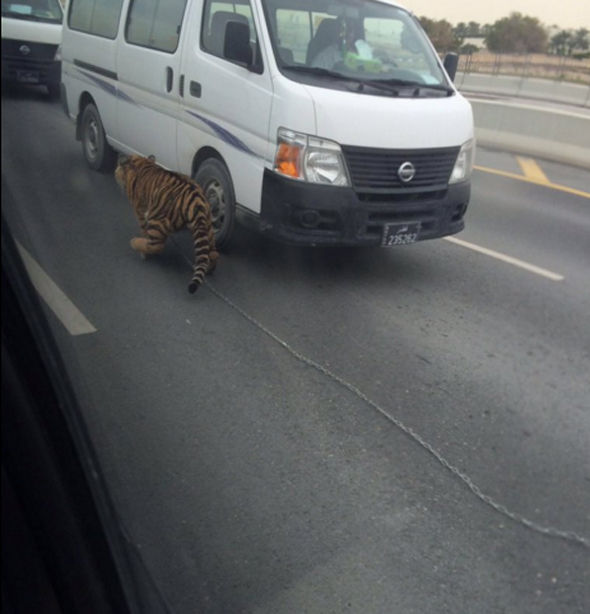 Last year, an escaped cheetah cub was found in the north of Doha, with authorities seeking out its owner.

This is what the Ministry Of Interior had to say about yesterday’s incident:

We assure all that the concerned authorities r following up with what has been trending over spotting a tiger in some areas of the country.

The tiger was handed over to the competent authorities and further legal proceedings have been initiated. #MoI_Qatar

News
EDITOR’S PICKS
9 royal-approved Dubai restaurants
READ MORE
12 incredible rooftop pools in Dubai to check out
READ MORE
16 of the best beach bars in Dubai for sundowners
READ MORE
Covid-19 rules in Dubai: all the updates you need to be aware of
READ MORE
MOST POPULAR
Pics of the week: Your best photos of the UAE
Get groceries for as little as Dhs1 with this huge weekend sale
Review: Li'Brasil is the chic new restaurant at Address Beach Resort
3 of the hottest debut authors at the Emirates LitFest 2021
The day of love is taking centre stage at W Dubai – The Palm
YOU SHOULD CHECK OUT
Our website uses cookies and other similar technologies to improve our site and your online experience. By continuing to use our website you consent to cookies being used. Read our privacy policy here.