The Dubai government is going to send Dhs73 million to help children who can’t learn simply because of where they live. Why? Because “education is a fundamental right of every child”…

Dubai has been notably charitable recently.

H.H. Sheikh Mohammed bin Rashid Al Maktoum, Vice President of the UAE and Ruler of Dubai was in the papers last week after he filled his private plane with Dhs1.29 million of aid to send to Haiti. And earlier this year, he committed Dhs5 billion to develop knowledge, education, healthcare around the region.

The money will go towards three education programmes in conflict zones in Lebanon, Niger and Sierra Leone.

Here are some of the videos released by Dubai Cares showing some of the children the #LastILearned initiative seeks to help:

The #LastILearned campaign will run for a month, raising funds and awareness for children whose schooling is affected by conflict and natural disasters.

“Education is a fundamental right of every child,” explains Dubai Cares.

“Despite the growing number of children caught in conflict and natural disasters, statistics show that only one per cent of overall humanitarian aid is spent on education,” said CEO of Dubai Cares, Tariq Al Gurg.

“We have to unite and act faster than ever to ensure that children’s education is not interrupted, resulting in generations missing out on an education they so desperately need.”

If you’d like to make a donation yourself, you can head over to Dubai Care’s website to do so.

Also…
*Sheikh Mohammed visits his daughter at school*
*In pictures: 9 times Sheikh Mohammed was just like us*
*The UAE launches a world-first tolerance charter*

Remember, earlier this year, the Dubai government and its residents also donated more than 8.2 million books to children in refugee camps as well as schools in need around the Muslim world.

They’ve also pledged to set up 2,000 libraries set up around the world. “We plan to move from feeding the hungry to nurturing minds,” said Sheikh Mohammed.

“Combating ignorance is the fastest route to combating poverty,” he added.

HOW DUBAI IS HELPING EDUCATE THE REGION 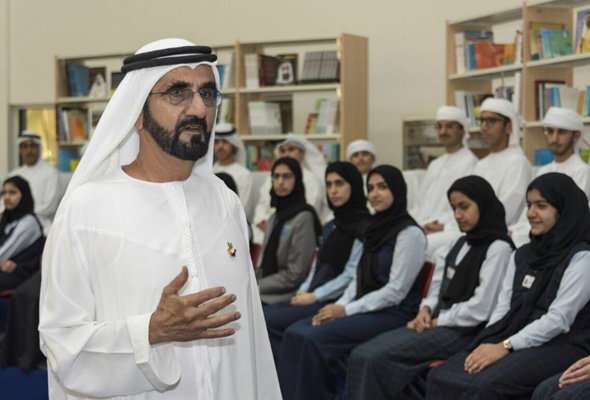 Sheikh Mohammed speaks to local students about education in the UAE.

The Dubai Translation Conference has just kicked off in Dubai today too (it will run until Saturday). What is it all about? Well it will translate the creative content of Arab writers for non-Arabic speakers.

How? Through translating Arabic literature.

There will also be some speakers and workshops at the Dubai Translation Conference – head here for details of the programme and to register.

“Translation is a two-way process that builds bridges among nations and cultures,” says Aisha Miran from the Executive Council of Dubai.

“Today Dubai is making a first move, and we anticipate that others will do the same as well.”

Coming from the 22 countries that make up the Arabic-speaking world, Arab literature is lagging behind other languages in the numbers of books published and translated annually.

*ALSO: You can now get books delivered for free in the UAE*

Translating Arabic texts into other languages and vice versa is essential if the world wants to further unite, which is why the Dubai government is focusing on doing so.

CEO of the Emirates Literature Foundation, Isobel Abulhoul said, “As this is the Year of Reading in the UAE, expanding the range of literature available has never been more important.

“Improving the quality and range of literature in the Arabic language will lead to more readers, in turn resulting in a better educated population.