The Dubai ruler has written an open letter about how much has been accomplished in the past decade (but says there’s a lot that still needs to be done).

Sheikh Mohammed has now been Dubai’s ruler for a little over a decade, and a lot has changed in that time.

In a new open letter published on LinkedIn yesterday, H.H. Sheikh Mohammed bin Rashid Al Maktoum, ruler of Dubai and Vice President of the UAE, has reflected on the country’s “decade of achievements”.

“It is important to pause occasionally and review our past work, measure our accomplishments and chart our road ahead,” Sheikh Mohammed explained, saying he is now focusing on what Dubai and the UAE will look like in 2021.

HIS REFLECTIONS ON THE PAST DECADE

In the beginning of the letter, Sheikh Mohammed points out that, “despite the global financial crisis and the resulting economic slowdown, despite the upheaval and disorder our region has endured, the United Arab Emirates has shown marked progress in all sectors. Our economy has doubled in the past ten years, from a GDP of Dhs663 billion to Dhs1,360 billion.”

1. He points out that the UAE’s focus on diversifying the economy beyond a dependence on oil has led non-petroleum exports to increase from Dhs113 billion when he took over office to Dhs603 billion now. “This has provided our economy with considerable protection throughout the recent decline in oil prices and meant we have been one of few countries worldwide cushioned against the resultant economic slowdown,” he explains.

2. Sheikh Mohammed points out that he considers health and education “to be among the most important sectors for our people”, and that the number of doctors in the UAE has increased from 10,000 to more than 17,000. And investment in health by the UAE has almost doubled from Dhs1.18 billion to Dhs3.82 billion.

3. As for education, the UAE now has the world’s highest global kindergarten enrollment rate (93 per cent) and the rate of high school graduation has risen to 93 per cent too. In the past 10 years the UAE has increased its investment in public education by 57 per cent (they now invest Dhs9.75 billion annually into it).

4. “We have seen a major growth in our competitiveness, from being the world’s 32nd most competitive economy to the 16th,” he explains in his letter. “This has placed the young nation of the UAE on a par with countries who have hundreds of years of development behind them.”

5. The UAE now leads the Middle East in over a hundred key development indicators. But it leads globally in some areas too, these are: “the quality of our public infrastructure, roads, maritime and aviation facilities, public safety and security, the rate of female enrollment in universities and government efficiency.”

7. Foreign Direct Investment has shot up from Dhs179 billion to Dhs410 billion in the past 10 years, Sheikh Mohammed explains how this is “due to our open economic policies”. Plus, the UAE’s banks’ total assets have increased from Dhs859.6 billion dirhams to Dhs2,478.2 billion dirhams in the last decade.

BUT THE CHALLENGES AHEAD? 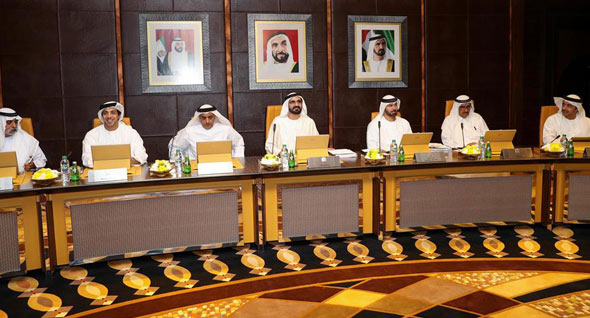 Sheikh Mohammed points out that there are some bumps in the road ahead if the UAE will look how he envisions it should by 2021.

“A few years ago, we announced the Indicators for our National Agenda. There are 52 national key performance indicators in education, health, housing, society, infrastructure, economy, environment, security, justice, and safety, among others, which we aim at achieving by 2021, to be among the best countries globally by that date, which marks the 50th anniversary of our Union. These indicators form historic goals for us in the next five years. They constitute the greatest challenges ahead of us; challenges we must overcome in the years to come.

“A week ago, I received a detailed report about the current progress in achieving these indicators – it stands at 62 per cent, which means 38 per cent of the indicators have not been effectively achieved. We have only 5 years remaining, a very short period in the life of a nation. It is not our custom to appease or ingratiate anyone, because courtesy at the expense of the country is not a sign of nationalism.”

Want to know what the goals Sheikh Mohammed has set for 2021 are? You can read about them here.

Yesterday Sheikh Mohammed announced a new team called the National Agenda Execution Teams, 550 government officials from all departments who will work to intensify the efforts to achieve the goals set out by 2021. The goals cover everything from technology to, sustainability, education, transportation, international relations and politics and food and water security.

“There is no room for procrastination, no time for delay. History is a witness to all of us. We have promised our people to accomplish what is best and we shall fulfil our promise. Government work is an honourable duty, and our government will ceaselessly and tirelessly implement its plans and fulfil its objectives. I will lead this effort and the teams behind it personally.”

“I will leave the rest to our government officials and the members of our media to discuss openly, with transparency and without embellishment but with numbers and facts, research and studies so we can right our path if we need to, work harder if required,” he added to the letter.

“Through all of this, we remember that our goal is the advancement and glory of our nation and the betterment and happiness of our citizens.”

News
EDITOR’S PICKS
Here's the full list of UAE public holidays in 2023
READ MORE
23 incredible things to look forward to in the UAE in 2023
READ MORE
Hidden gems: 10 UAE desert pop-ups to discover this winter
READ MORE
Where to travel in 2023: 10 new flight routes from the UAE
READ MORE
MOST POPULAR
Popular outdoor market Etisalat MOTB extended until January 31
When is the next public holiday in the UAE?
W Abu Dhabi will host a second edition of its sustainable Looped In menu
The UAE law changes on marriage, divorce and child custody to know about from February 1
5 fabulous new Dubai hotels to check-in to
YOU SHOULD CHECK OUT
Our website uses cookies and other similar technologies to improve our site and your online experience. By continuing to use our website you consent to cookies being used. Read our privacy policy here.