Dubai Rugby Sevens 2016: The game, the costumes, the fun

It’s a long weekend and it’s Sevens weekend – get amongst it!

Exciting action on and off the pitch as some of the world’s best rugby players hit Dubai – and each other.

Here’s your guide to the Rugby Sevens this year (and don’t worry, we’ll be bringing you more on the transportation and after parties later in the week too)…

7 things to know about the game 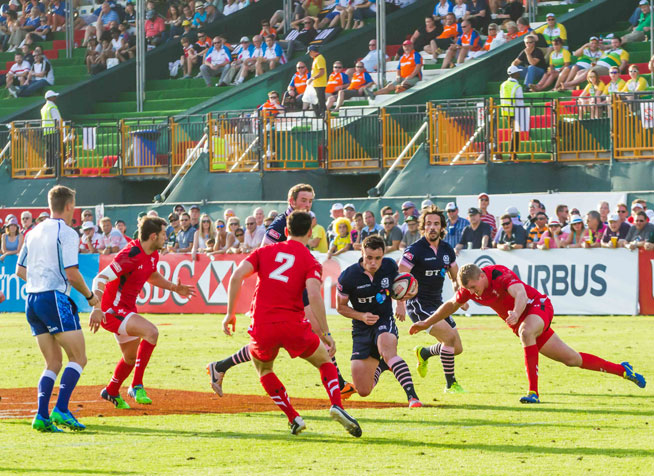 There are five ways to score

Try = Five points: Touching the ball on or over the try-line.

Conversion = Two points: After every try, the team has a chance to kick the ball over the crossbar.

Penalty kick = Two points: Awarded for a certain infringement of the rules giving players the chance to kick the ball over the crossbar.

Drop-goal = Three points: This is a kick in open play when the ball is dropped to the ground then kicked between the posts and over the crossbar.

Penalty try = Five points: If foul play has been deliberately committed to prevent a try then a penalty try can be awarded.

Scrums: When play is stopped for minor infringements, it is restarted by a scrum. During a scrum, the ball is rolled into the middle of the two opposing ‘packs’. All players not involved must be behind their side of the scrum otherwise they are off side.

Tackle: Tackles must be no higher than the shoulders and must be made using arms. If the tackled player is brought to the ground, he or she must release the ball so that both teams can contest possession.

Referee: There is one referee to control the match, two touch judges and an in-goal judge to help the referee make decisions.

Players: There are seven players on the pitch for each team: four backs and three forwards.

Match length: Each half  is seven minutes with a one-minute half-time break. 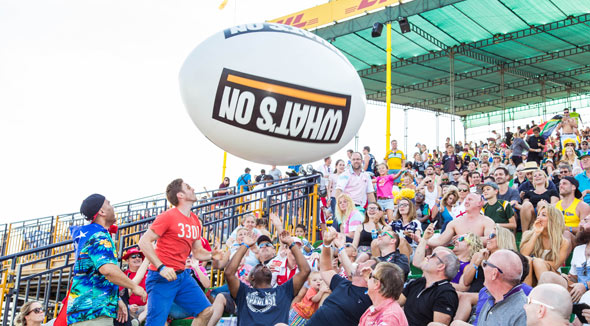 Dubai Rugby Sevens is not just for grown-ups. There are plenty of activities and games for youngsters too

– The Sabaa 7s Club is a playtime paradise for children. There are games, activities and shows throughout the day. Look out for bouncy castles, face painting, and visiting mascots. Plus, there’s plenty of shade to play in or just rest under.

– There’s a crèche for parents who want to leave their kids for a while so you can concentrate on the rugby.

– There’s a new Teen Zone with music courtesy of Virgin Radio DJs and a number of PlayStation units set up to enjoy.

– The dedicated alcohol-free family section at the Sevens has moved to the DHL West Stand, which provides plenty of shelter from the sun.

– Look out for What’s On’s Big Ball In The Crowd. The name really says it all.

– There’s something for everyone in the Rugby Village – entertainment, official merchandise and loads of food and drinks.

READ MORE
*IN PICS: Some of the best costumes from a past Sevens weekend* 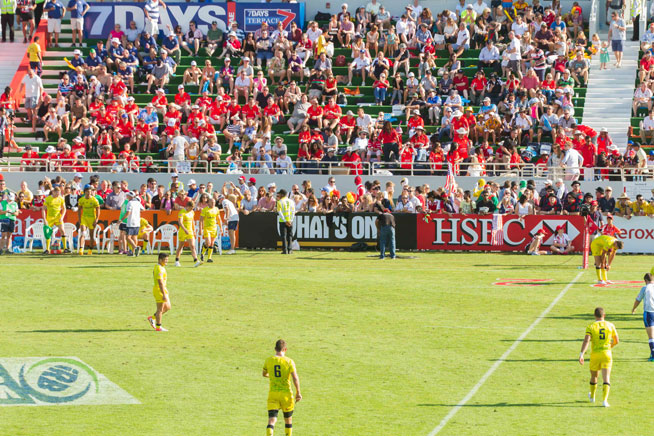 250: Hours of live rugby broadcasted across the globe

10: Number of rugby sevens tournaments around the world

Want to look the part at the Dubai Rugby Sevens? Be inspired by our group costume choices, as modelled here by the What’s On team… 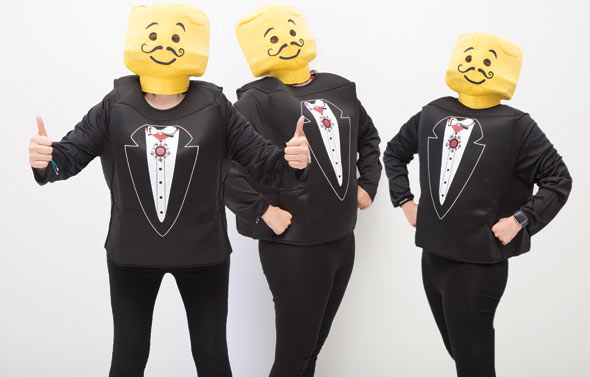 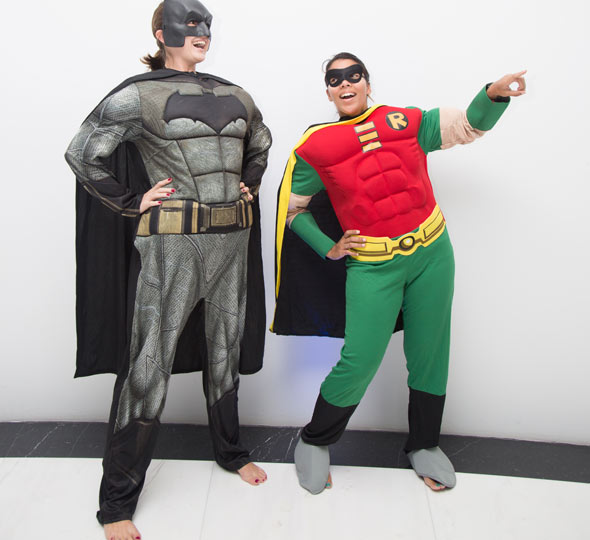 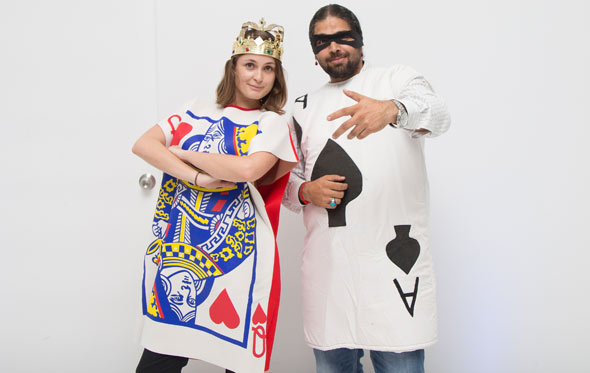 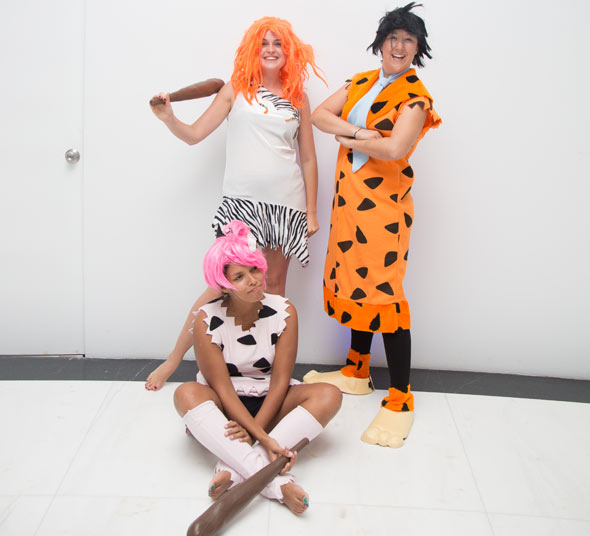 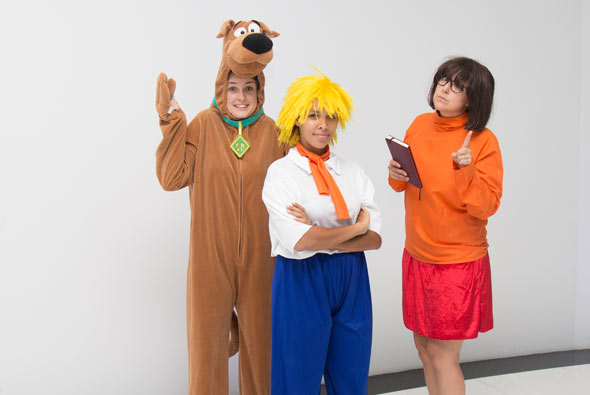 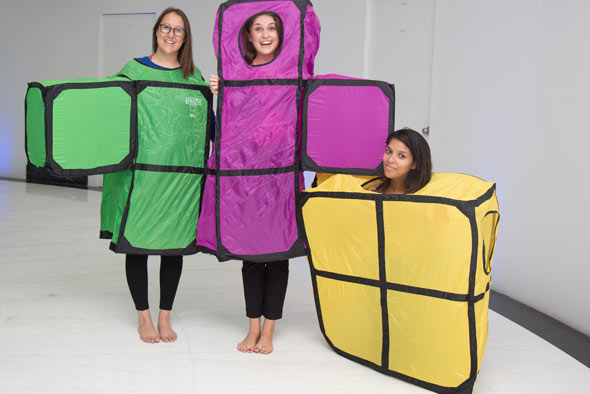 A Q&A with a New Zealand hero 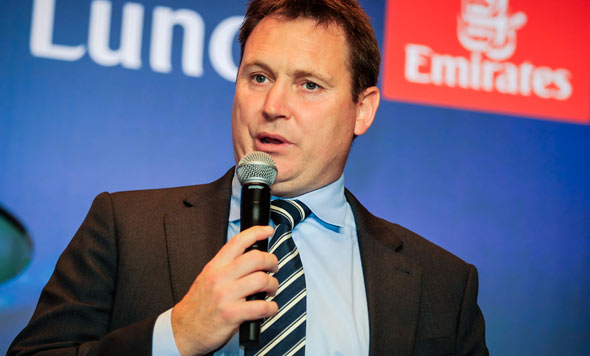 Before a stellar career in the 15s game, what did you love about playing sevens rugby? Sevens is just great fun – absolutely fantastic fun. Well, it is when you’re light, and fit, and fast. When I was younger I was pretty lean and fit with good acceleration so it suited me. Nowadays, I enjoy watching it as I would another sport and marvelling at the abilities of the players.

Is the reputation of sevens rugby growing? Yes, the Olympics helped massively. It’s a fantastic vehicle for men, women and children to get into rugby, because it’s very exciting to play. When you see non-traditional rugby countries – such as Kenya and the US – winning sevens tournaments it’s fantastic to see how much the sport has grown.

Do you think it’s more enjoyable to play than standard rugby? It’s different. It’s simpler to play but also more exciting. There’s an awful lot more space on the field with nowhere to hide. It’s also simpler to understand as a spectator, making it really enjoyable to watch.

Which team is going to win in Dubai? Speaking objectively, I think New Zealand have got it in the bag.

Dubai loves dressing up for the Sevens. When was the last time you wore a costume? Oh man, do I really have to say? OK, I dressed up as a cheerleader for a Christmas party. Don’t ask me anymore… 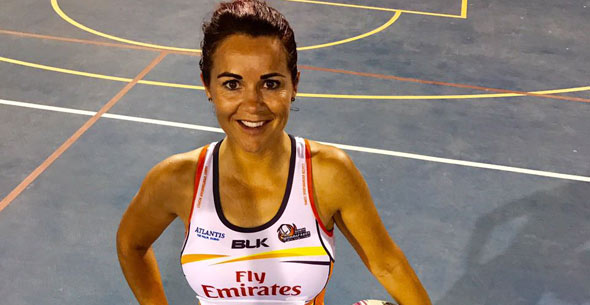 Lou was part of the team that won the Dubai Sevens’ inaugural netball competition last year. Now she is back with a new team for the netball tournament that runs alongside the rugby games.

How excited are you to be returning to the Sevens netball tournament this year? Super excited. With more teams involved, it’s a much bigger tournament.

Your team has changed this year, and now you’re the Hurricanes. Yes, we have merged with another team this year to form Dubai Hurricanes. Dubai Hurricanes is a successful rugby club, which has been going strong for eight years. I launched the netball club in September. It’s a very family-orientated club with values of respect, commitment and sportsmanship. The team balances old wisdom and young strength.

Is there a lot of pressure to win? There is always pressure to retain the title from the previous year; it’s how we handle it that matters.

Can you explain netball to a newbie? You could say it’s like basketball, but without the dribbling. It’s a fantastic team sport, which is dynamic, fun and fast-paced.

Netball is a non-contact sport, but does it ever turn aggressive? It certainly can be tough out there. I have had my share of injuries through contact – broken ribs, black eyes and bruises all over. Some late challenges can pack a punch. I always encourage my team to focus heavily on decorum on court. Generally it’s a great game with assertiveness and not aggression.

What’s on the team’s playlist? Our soundtrack is a real mixed bag. We’ve got Wham, Stereophonics, Rihanna, Take That, Duran Duran – it’s a real game of Russian roulette. 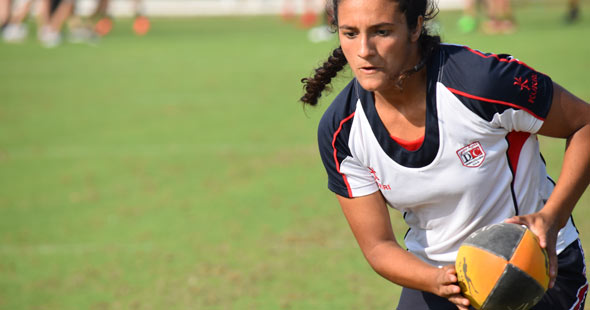 When did you first get into rugby? I started playing tag rugby when I was four years old at Dubai Exiles. My mum used to play and I grew up watching her from the sidelines.

Were you the only girl playing rugby at the start? There have always been a few girls dotted about the boys’ teams in most of the clubs throughout the UAE. I think being a girl has helped in a positive way to make me more determined in sport. Each season, there would always be the question of whether I would be able to cope as a girl – never from me, my coaches or my family – but from others who often thought they knew better. I couldn’t afford for my game to drop or show any weakness, as people would assume it was always because I was a girl. 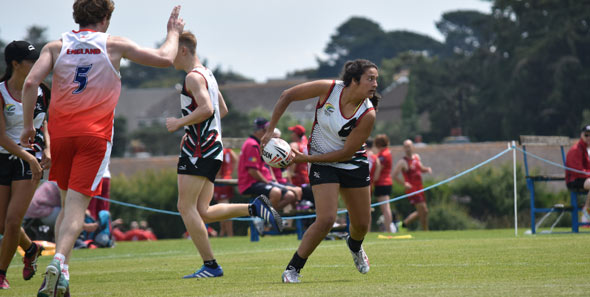 What do you love most about playing rugby? I love rugby for lots of reasons. It’s such a brilliant team game. Rugby is forever changing and today you cannot just power through a tackle to become a successful player. It is one of few sports that really tests how quickly you can react to what’s in front of you.

How does it feel to be taking part in such a huge competition? I think the Dubai Rugby Sevens is the highlight of Dubai’s sporting calendar. The atmosphere will be phenomenal. Women’s rugby rarely draws big crowds; but at the Sevens we get to play in front of thousands.

Now that rugby sevens is an Olympic sport, could you see yourself representing your country one day? You never know what the future holds, and with women rugby developing worldwide, fingers crossed I can be part of this.

News
Outdoor
Sport & Fitness
EDITOR’S PICKS
UAE holiday dates announced for Eid Al Adha
READ MORE
Another update: Emirates extends suspension of flights from India to UAE
READ MORE
Coming soon: Everything we know about Ain Dubai so far
READ MORE
Khorfakkan set to open new tourist attraction 580 metres above sea level
READ MORE
MOST POPULAR
It's Dhs350 to brunch, stay and play at the What's On Lock In this weekend
After party: 8 of Dubai's best after-brunch deals on a Friday
Jones The Grocer is bringing its cheese, grape and jazz night to Abu Dhabi
A two-day art festival is taking place in Alserkal Avenue this weekend
Transport to Greece as Opa's monthly brunch returns
Al Qana update: Abu Dhabi mega project announces four new F&B outlets
YOU SHOULD CHECK OUT
Our website uses cookies and other similar technologies to improve our site and your online experience. By continuing to use our website you consent to cookies being used. Read our privacy policy here.