Between Mary Poppins and Cats, the announcements are coming thick and fast from Dubai Opera at the moment, and we’ve got another one for you…

You may not have heard of him, but you’ve definitely heard this Hollywood legend’s music: it’s just been announced that Michel Legrand, the French composer, conductor and jazz pianist, will be filling the opera house with beautiful tunes for just one night on February 23 2017.

You can trust you’ll hear some impressive songs – and many you’ll recognise – considering the Frenchman has more than half a century of experience under his belt and is responsible for more than 200 film and TV scores. 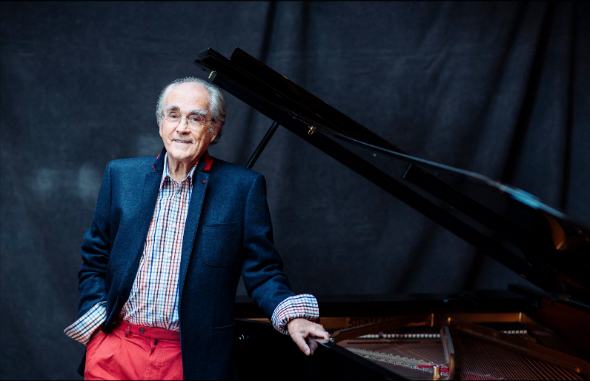 Legrand’s known for his atmospheric and emotional tunes and has bagged three Oscars for his soundtracks, one for the 1968 classic The Thomas Crown Affair, one for The Summer of ’42 (actually made in ’71) and the latter for his work on the 1983 film Yentl, starring Barbra Streisand.

He has recorded more than 100 albums over his time, working with big names such as Ray Charles, Aretha Franklin, Frank Sinatra and Diana Ross.

Here he is singing his song Windmills of Your Mind (or Les Moulins de Mon Coeur) from The Thomas Crown Affair, in French (how cool)…

“His musical scores are as memorable as the incredible films they’ve brought to life,” says Jasper Hope, the Dubai Opera Chief Executive. “I’m delighted we’ve been able to persuade him to share them live.”

The show is all part of the epic world tour that Legrand is taking to celebrate his 85th birthday – that’s one serious party.

Tickets will be on sale from November 23 on the Dubai Opera site.

For proof of his serious piano skills, listen to the soundtrack he composed for Summer of ’42

And don’t worry, we’ll keep you updated on any more Dubai Opera gig announcements: in the meantime why not check out Quincy Jones’ new Dubai music/lounge bar? Yes, you read that correctly.

Culture
News
Nightlife
Theatre
EDITOR’S PICKS
UAE holiday dates announced for Eid Al Adha
READ MORE
Another update: Emirates extends suspension of flights from India to UAE
READ MORE
Coming soon: Everything we know about Ain Dubai so far
READ MORE
Khorfakkan set to open new tourist attraction 580 metres above sea level
READ MORE
MOST POPULAR
A fun new Saturday brunch is launching at MASTI Dubai
Review: Newton
Free chicken wings for three days at this celeb-fave Abu Dhabi restaurant
Review: Explore the Palm Jumeirah with a stay at St. Regis Dubai, The Palm
Etihad: India flights on hold until at least August 2
YOU SHOULD CHECK OUT
Our website uses cookies and other similar technologies to improve our site and your online experience. By continuing to use our website you consent to cookies being used. Read our privacy policy here.