Sheikh Mohammed on why Dubai Creek is so important

The Dubai Creek may not be the city’s most important trading port anymore but it will always be the heart of Dubai, Sheikh Mohammed explains…

“The Creek is the very heart and soul of Dubai – its raison d’être,” explains H.H Sheikh Mohammed bin Rashid Al Maktoum, ruler of Dubai and Vice President of the UAE. The Dubai Creek has extended its reach beyond Deira and Bur Dubai and now flows throughout the entire city after the Dubai Canal opened last week.

“Today, the Creek comes full circle; still shaping the very soul of Dubai, now running freely through the veins of the city, keeping alive its vibrant heartbeat, linking the sea back to the sea,” he explained in an open letter on LinkedIn this week.

“The Dubai Water Canal is not just an architectural accomplishment, but also a triumph of our heritage, history and heart.”

Why is it so important for the city? Well, as Sheikh Mohammed explains, the waterway’s history started “as far back as 114 years, in 1902, when His Highness Sheikh Maktoum bin Hasher, Ruler of Dubai at the time, abolished all custom duties on imports – a move bold even by today’s standards.”

“As taxes increased across the Arabian Gulf at the Persian port of Lingeh, the popularity of the Dubai Creek exploded; Indian goods flooded into the city’s port, and Dubai quickly became the Gulf’s hub for re-export to neighbouring ports and inland markets. Many merchants moved to the city, and it transformed into a regional headquarters for trade,” Sheikh Mohammed explains of the beginning of the Creek’s economic boom. 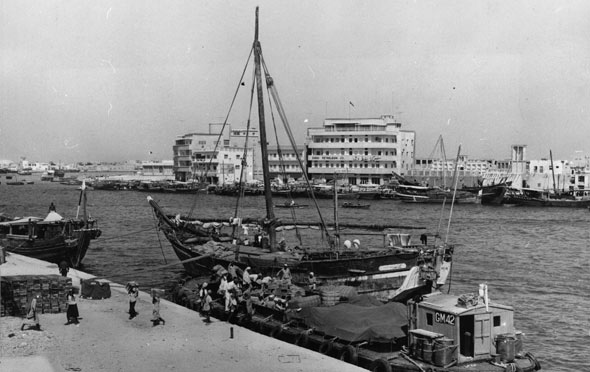 Trade on Dubai Creek in the late 60s.

In the early 1900s the pearl trade was booming – and was Dubai’s main source of economy. But then, in 1929 the Great Depression hit, followed by World War II – the pearl industry all but vanished, hitting Dubai and the Gulf hard.

“People had relied on the pearl trade, and its demise led to mass bankruptcies and hardships,” Sheikh Mohammed explains in his letter.

But Dubai has the region’s most progressive trade policies, and a fantastic coastal location, so, as Sheikh Mohammed explains: “Like a phoenix rising from the ashes, the pearl-dependent economy diversified into all sorts of other trades and ventures, allowing the Emirate to prosper again and become the unchallenged hub of Gulf trade.”

An important turning point for the city, explains Sheikh Mohammed, was the dredging of the Creek in 1960 – this widened and deepened the Creek, increasing trade in Dubai and leading to a population boom too. This was overseen by Sheikh Mohammed’s father, Sheikh Rashid, who ruled Dubai for 32 years from 1958 until 1990.

Then there was one of the first major infrastructure projects in the city – the building of the Al Maktoum Bridge, which opened in 1963. A key moment in Dubai’s history – again, centred around the Creek.

It was around this time that the Jebel Ali port opened and oil became a more vital part of Dubai’s economy, but, as Sheikh Mohammed explains, the waterway’s “cultural value remains untouched”.

“Today, the Creek is a symbol of Dubai’s identity and strength, its dhows floating by as if on a page in a history book.”

Sheikh Mohammed goes on to explain how “the future belongs to those who can imagine it, design it and execute it. It isn’t something you await, but rather create.”

He explains how Dubai Creek created Dubai’s present, and the newly opened Dubai Canal extension will help create its future.

“The Dubai Water Canal introduces a brand new phase of Dubai’s life – the heart of Dubai is now an island,” Sheikh Mohammed adds. “With the excavation of over 10 million cubic metres, as well as the addition of 18 kilometres to Dubai’s waterway, the many developments planned for the new landmark include a major shopping centre, hotels, over 450 restaurants, cycling trails, parks, residential towers, and more. The canal is six metres deep and features bridges eight metres high, allowing yachts and marine craft up to 200 metres in length to pass through. It is estimated to attract over 30 million visitors annually.”

We can’t wait to watch it all unfold – and keep you guys in the loop as it does.

Culture
News
EDITOR’S PICKS
Here's the full list of UAE public holidays in 2023
READ MORE
23 incredible things to look forward to in the UAE in 2023
READ MORE
Hidden gems: 10 UAE desert pop-ups to discover this winter
READ MORE
Where to travel in 2023: 10 new flight routes from the UAE
READ MORE
MOST POPULAR
W Abu Dhabi will host a second edition of its sustainable Looped In menu
The UAE law changes on marriage, divorce and child custody to know about from February 1
5 fabulous new Dubai hotels to check-in to
Pics of the week: Your best photos of the UAE
Dhow & Anchor has got you covered every day of the week
YOU SHOULD CHECK OUT
Our website uses cookies and other similar technologies to improve our site and your online experience. By continuing to use our website you consent to cookies being used. Read our privacy policy here.