Another food truck festival is coming to Abu Dhabi

Food trucks are certainly having a moment here in the capital, and there’s another festival coming to the city next year that will see you eating from four wheels.

The Love Food Festival returns to Abu Dhabi for a second time this February – and it’s gotten even bigger. In addition to hosting both local UAE vendors alongside UK trucks, the event will also host 10 new trucks from the USA. 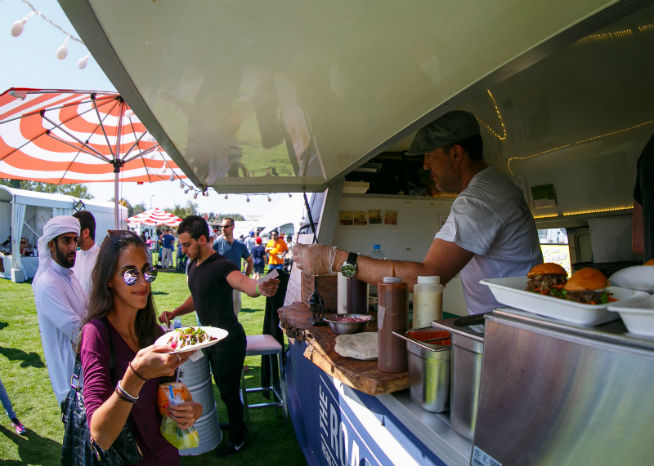 So what’s on the menu? Some of the confirmed vendors include The Cheese Truck, who’ll be serving up posh cheese toasties from their bright yellow 1973 Bedford CF converted ice cream van. Visit The Other Side if crispy fried chicken sandwiched between potato bread is what you’re after. Or if you’re after something a bit more international, try Paella Paella for an authentic serving of the classic Spanish dish.

For dessert Churros will be serving up crispy churros with chocolate from their Citroen H Van or try the Crema Caravan for crème brulee style puds.

In addition to the food there’ll also be celeb chef demos, live music, a kid’s zone and an outdoor cinema that’ll be screening foodie films.

The Love Food festival will be hosted at Al Jahili Park in Al Ain from February 9 to 11, and then at the Umm Al Emarat Park in Mushrif from February 16 to 18. Watch this space to find out more.

Eat & Drink
News
EDITOR’S PICKS
So, when is the next UAE public holiday in 2021?
READ MORE
All of the lavish new hotels set to open in Dubai in 2021
READ MORE
16 of the best pool passes in Dubai that are fully redeemable
READ MORE
All of the restaurants at West Beach, Palm Jumeirah
READ MORE
MOST POPULAR
Win a room at next weekend's Fairmont Bab Al Bahr Lock In
MOHAP begins Sinopharm trials on children aged three to 17
3 all-you-can-eat breakfast deals in Dubai to try this weekend
Update: Emirates again extends suspension of flights from India to UAE
This Abu Dhabi hotel has amazing dining deals seven days a week
YOU SHOULD CHECK OUT
Our website uses cookies and other similar technologies to improve our site and your online experience. By continuing to use our website you consent to cookies being used. Read our privacy policy here.