Video: We eat breakfast while hoisted 50 metres into the air

Has your morning bowl of muesli at the kitchen table become too mundane? Perhaps tucking into a breakfast feast suspended 50 metres above the Dubai Marina will pique your interest. Well you now can, as Dinner in the Sky has just launched in Dubai (it’ll be running in the city until May).

We tried it, here’s how it went…

Fearless foodies can choose from breakfast, lunch, afternoon tea or dinner, and will be hoisted by a crane into the air, to dine suspended over the city for one exhilarating hour.

Coffee with a view

The concept began in Belgium and Germany 10 years ago, and has spread to over 40 countries worldwide.

We tried it early on Monday morning and after last calls for bathroom breaks (there’s no toilet in the sky), and a red-carpet arrival, a charming staff member strapped us into our bucket seat at the “sky platform”. 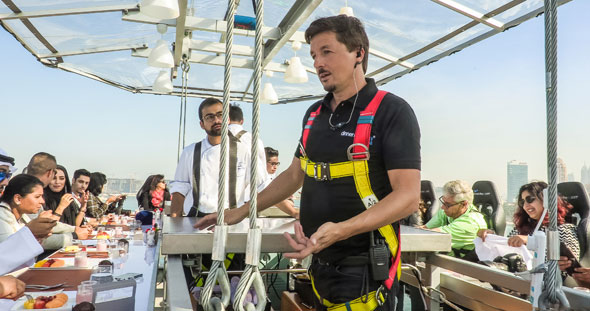 The host talks you through the whole experience

As nerves around the table started to set in, the host assured everyone they’ve not had a single safety blip in a decade of existence.

Twenty-five per cent of diners taking part are afraid of heights, he says, but after five minutes or so everyone is “used to it”.

We hoped so for our neighbour’s sake: his grip on the table was turning his knuckles white. 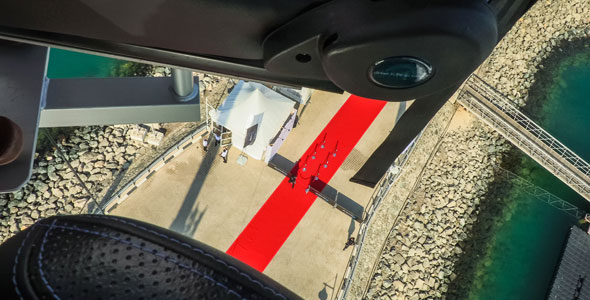 This is what you see if you look down…

After being hoisted smoothly into the air, the Ritz Carlton chefs introduced breakfast – which begins with a plate of fruit, freshly-made muesli, a muffin, a croissant and a raspberry smoothie.

Five minutes passed and – as predicted – our neighbour had relinquished his grip on his table and found his appetite. Despite a wobble or two, no-one batted an eyelid as the crane rotated the table a full 180 degrees.

Besides, everyone was far too interested in ensuring selfies were taken with every changing backdrop.

For the brave, the chairs can also fully swivel around, and recline.

Finally, a steaming plate of scrambled eggs, chicken sausage, grilled tomato and hash brown was laid out in front of us.

There are lights on the platform (for those dining at night)

About an hour after first taking flight, we were back on the ground, and thankful no-one dropped an iPhone or knife over the side.

Eat & Drink
Outdoor
Restaurants
Sport & Fitness
Things to do
EDITOR’S PICKS
13 Sheikh Hamdan-approved restaurants in Dubai
READ MORE
Dubai brunches temporarily banned in new preventative measures
READ MORE
12 upcoming Dubai mega-projects we can't wait for
READ MORE
16 of the best beach bars in Dubai for sundowners
READ MORE
MOST POPULAR
Breaking: Dubai extends preventative measures until mid-April 2021
Enjoy brunch, breakfast and a stay at Westin Abu Dhabi from Dhs432
Get a free gym class at this cool new Dubai gym
Pics of the week: Your best photos of the UAE
Emirates Airlines and DHA to implement digital verification of traveller medical records
YOU SHOULD CHECK OUT
Our website uses cookies and other similar technologies to improve our site and your online experience. By continuing to use our website you consent to cookies being used. Read our privacy policy here.