Abu Dhabi resident and Irish expat Roisin Thomas was one of five riders to pedal across the country in one day last week
Two UAE cyclists have cycled across all seven emirates in less than 24 hours for the second year in a row – and this time they set a new record by completing the endurance challenge in under 15 hours.
Abu Dhabi-based Irish expat Roisin Thomas, along with Raslan Abbadi from Jordan, were joined by Rainier Clauna from the Philippines, Brit Andrew Laity and Emirati Ahmad Al Haj on the epic endurance test, and set off from Abu Dhabi last Wednesday morning, and finished in Dubai some 14 hours and 41 minutes later (although that’s moving time – they took breaks to refuel every 50km during their journey). Overall, the quintet cycled a whopping 467km with an average speed of 31.8kph. Check out their route below. 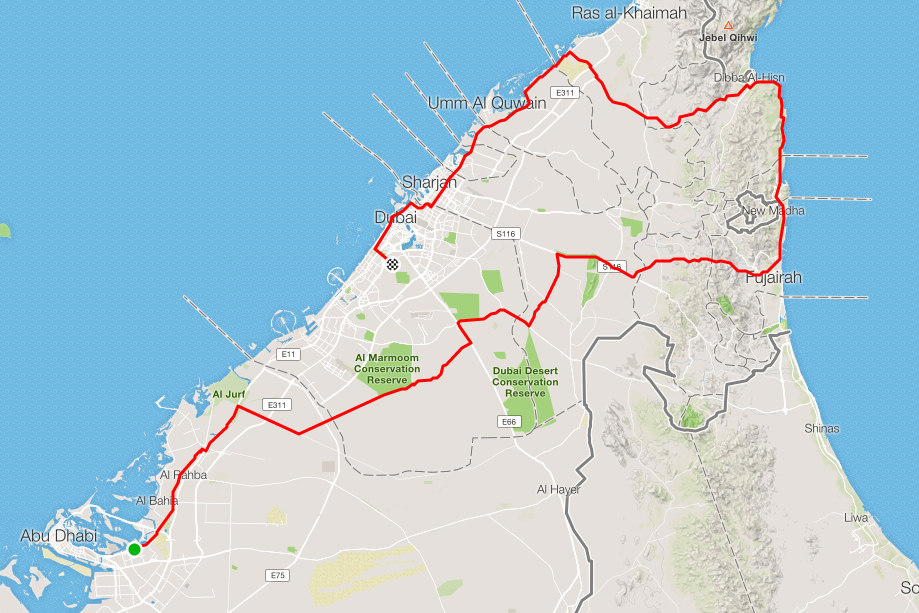 The five cyclists go by the team name 7Emirates 24Hours and the clue’s in the title – they started in the capital at 5am, and headed east through the UAE towards Fujairah, then once again crossed the country towards Sharjah before finishing in Dubai. On their way they passed through Ajman, Ras Al Khaimah and Umm al-Quwain.
It’s the second year in a row that Thomas, 28, and Abbadi, 31, have completed the challenge – and the first time for the rest of the team.
“It’s a challenge we created, a test of mental strength and physical endurance,” says Thomas, who works at UAE bike shop BeSport along with Abbadi. “We wanted to be faster than last year, when we did it in 16hrs. This year we managed 14 hours and 41 mins with a whopping average speed of almost 32kph.” 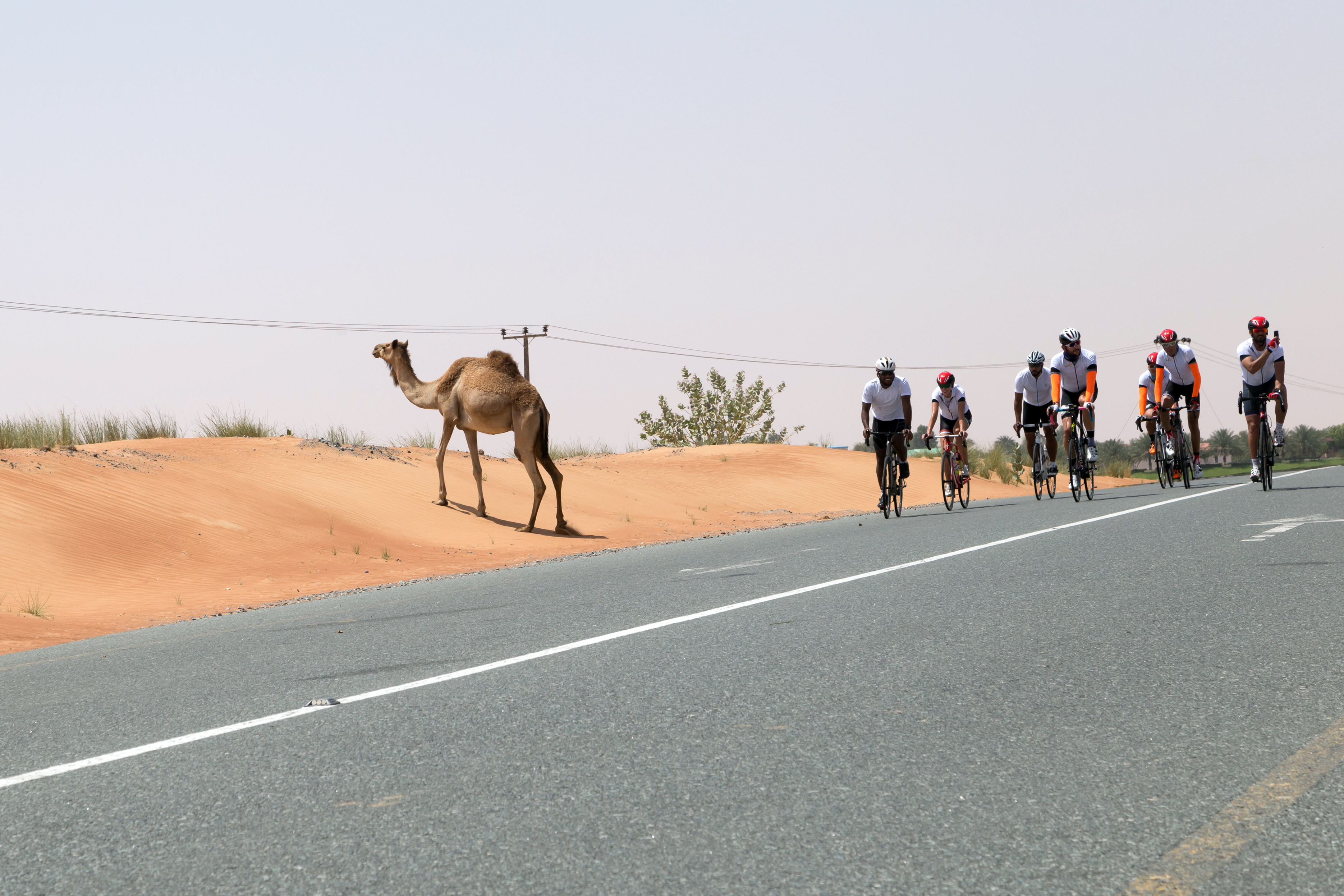 A few of the country’s other cyclists joined the team at various points along the route. “We were joined by UAE rider Abdullah Al Falasi, winner of the Saih al Salam race in Al Qudra, and a team rider from the UAE team near Dibba,” adds Thomas, who is a regular on the women’s race scene in the UAE and won the Spinneys Dubai 92 Cycle Challenge last year. She also got the chance earlier this year to train with a professional cycling team, Astana, for two weeks, in Italy. 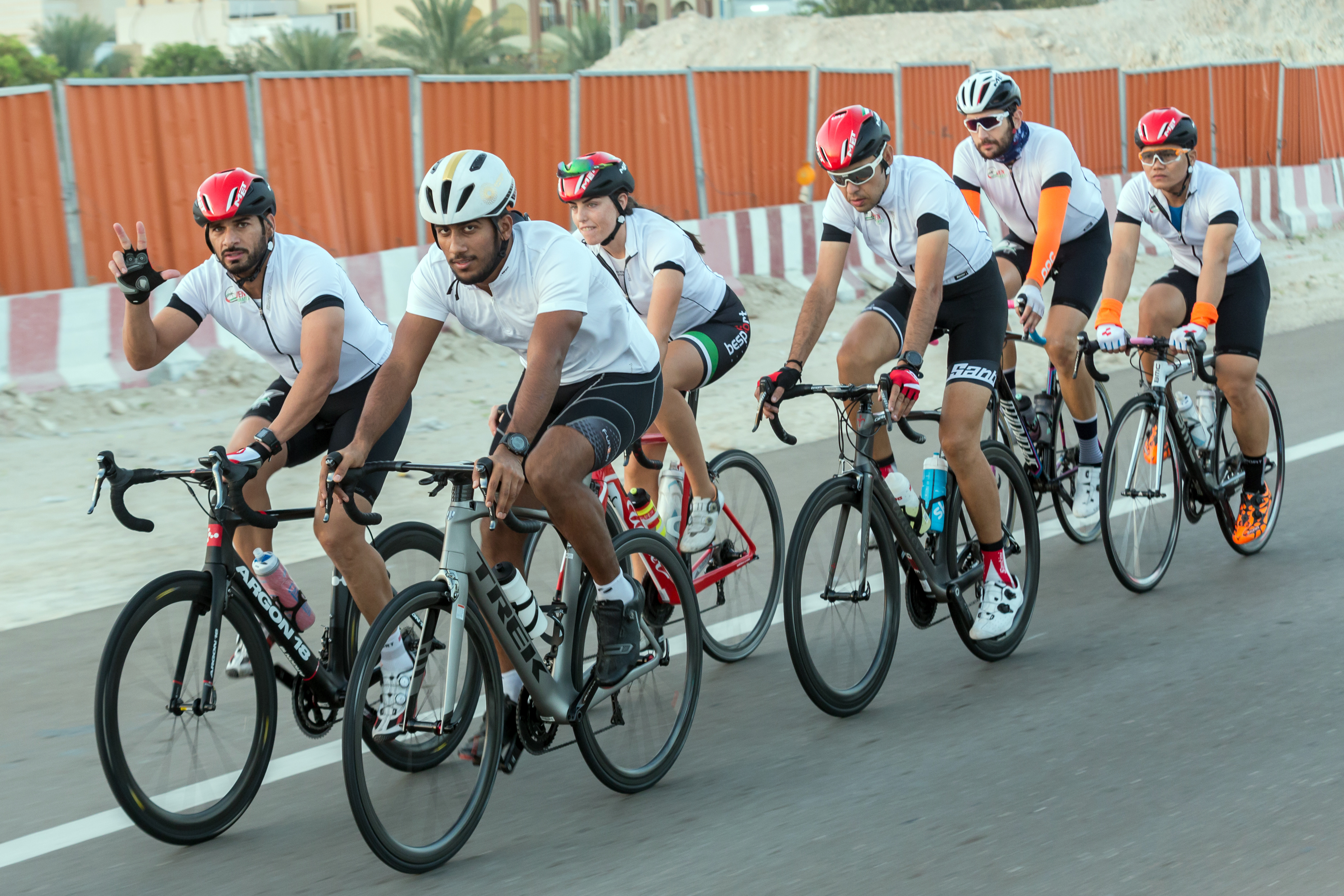 Al Haj, the team’s Emirati rider, was also a key member of the outfit this year, according to Thomas. “He’s the head of the triathlon federation in UAE and he really brought life to the ride! He’s a great character.” Finally, the team received support from two of Thomas’ friends, who followed them for part of the ride in a helicopter.
During the ride, the team also had to deal with the weather, but not in the way they expected: despite it being May, the riders faced rain in Fujairah. “It was a refreshing relief from the midday heat,” she says.
For videos and more info on their adventure, check out their Facebook page.

News
Outdoor
Sport & Fitness
Things to do
EDITOR’S PICKS
What’s On Nightlife Awards 2021: Here are the winners...
READ MORE
Where to see fireworks in Dubai
READ MORE
This new ladies' night offers a free open bar every Tuesday
READ MORE
Coming soon: The hottest new bars, restaurants and beach clubs
READ MORE
MOST POPULAR
Bob Marley’s The Wailers to perform at The Irish Village next month
A gorgeous rooftop bar has opened at Expo 2020 Dubai
Culture guide: A classical music night, performances and more to check out from Oct 28 to 30
Exploring Abu Dhabi’s hidden worlds of Culture and Cuisine
Myrra's last Saturday Summer Brunch is a special Halloween edition
YOU SHOULD CHECK OUT
Our website uses cookies and other similar technologies to improve our site and your online experience. By continuing to use our website you consent to cookies being used. Read our privacy policy here.