The next-level production will kick off this summer!

Remember La Perle? Well, we now know that the Franco Dragone stage show, which has its own permanent theatre in Al Habtoor City, will hold its first performance on Thursday August 31 – with tickets going on sale tomorrow.

Tickets will start from Dhs400 – and while there will be very pricey VIP packages available, there are only 14 rows of seats in the theatre, meaning every visitor should feel part of the action. Shows will run at 7pm and 9.30pm Tuesday to Friday and 4pm and 7pm on Saturday, 365 days a year.

The show has been conceptualised by Franco Dragone, who is behind huge world-renowned productions like Le Rêve in Las Vegas and The House of Dancing Water in Macau.

During the performance, acrobats and athletes will dive from 25 metres into the changeable aqua-stage filled with 2.7 million litres of water and will fly around the theatre at 15 kilometres per hour.

We’ve even heard that those in the front few rows may be given ponchos due to the splash factor of the show.

“The theatre we have built is not just a theatre, it’s an incredible machine. It’s like a special spaceship or more like an A380 plane which I have to fly,” explains the show’s founder and artistic director, Franco Dragone.

Here’s a sneak peek inside the theatre:

“It’s not possible that people seeing this show for the first time won’t be moved,” Dragone confidently told us earlier this year. Fighting words indeed. 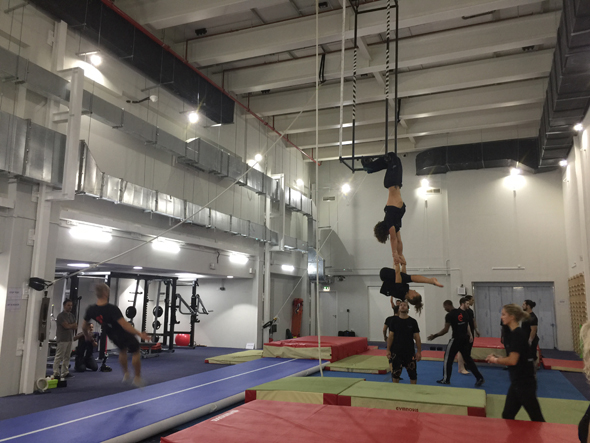 The performers have been in training in Dubai for many months already.

– The theatre is not a traditional stage – the seats wrap around the water pool (which is sometimes a dry stage), and for a space that can fit 1,300 viewers it feels surprisingly intimate.

– Food and drink is allowed in the show, as are phones and filming, and while there isn’t a particular kids’ policy, they do say the show will be best for children over five.

– We also know that there will be motorbikes involved in the show, and that these bikes will be in globes.

So how can I get tickets? You can book them at La Perle’s website, or PlatinumList.com. You can also call (800) LAPERLE or email boxoffice@laperle.com.

Culture
Theatre
EDITOR’S PICKS
Here's the full list of UAE public holidays in 2023
READ MORE
23 incredible things to look forward to in the UAE in 2023
READ MORE
Hidden gems: 10 UAE desert pop-ups to discover this winter
READ MORE
Where to travel in 2023: 10 new flight routes from the UAE
READ MORE
MOST POPULAR
6 brilliant things to do in Abu Dhabi this week: Feb 6 to 9
This stunning new wellness space will open in Dubai next month
Dubai tourism increases by a massive 97 per cent
16 incredible mega projects coming to Abu Dhabi soon
The epic Asian Le Mans Series returns to Dubai Autodrome this month
YOU SHOULD CHECK OUT
Our website uses cookies and other similar technologies to improve our site and your online experience. By continuing to use our website you consent to cookies being used. Read our privacy policy here.