Uber vs Careem vs Dubai Taxi - which one is cheapest?

Suffering from cab confusion? Here’s a breakdown of each service’s rates…

Cab-culture is something that is synonymous with Dubai. Whether you don’t have your own car to get to and from work, or are simply looking for a safe and convenient ride to brunch, for a certain segment of the city’s population, cabs are an every day part of life.

For a time, the only option available to residents was hailing an RTA taxi – by no means a bad thing – but in recent years a new crop of tech-focused car-hailing companies have appeared, injecting a healthy amount of competition into the market.

The two major app-powered players, local-heroes Careem and Silicon Valley bigwigs Uber, have recently launched their own low-cost options designed to fall in line with the pricing structure of the RTA’s cabs.

UberX and Careem Go are currently undergoing three-month trials, both publicly and privately, to see if the services are ultimately a benefit to consumers and, we imagine, don’t interfere with the RTA’s services too much.

One thing we have always struggled with, however, is getting to grips with just how much the various services cost compared to one another. To that end we’ve put together a couple of handy infographics to help clarify just which of the three will get you to your destination for the cheapest possible fare. Aren’t we nice?

While we have endeavoured to provide as accurate prices as possible, it should be noted that they are only estimates and can vary subject to time, distance, traffic, timing and availability of cars.

Now that we have all the disclaimers out of the way, let’s get on to the good stuff…

Uber vs Careem vs Dubai Taxi: A Breakdown

The first infographic is a breakdown of fares across the three services, illustrated by the base fare (what the meter starts on the moment you step into a car), cost per km and the minimum fare you will be charged regardless of the distance travelled.

We chose to compare the most commonly used cars across each service, including the low-cost, business and large options. For a full list of available cars and rates we recommend visiting each service’s respective website. 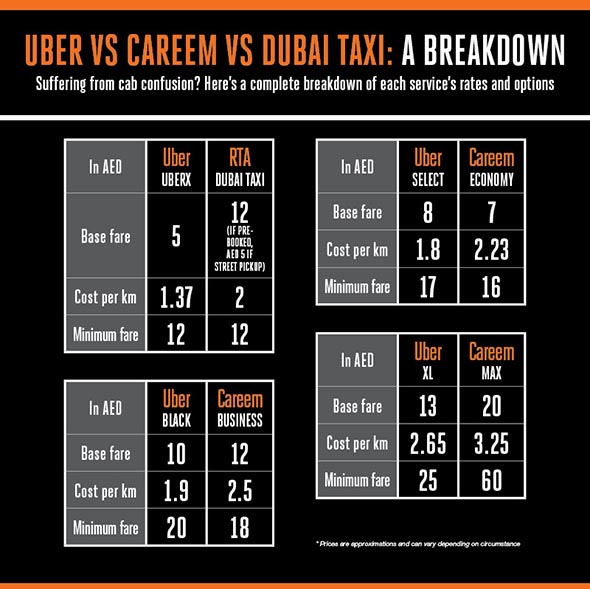 As you can clearly see above, Uber and Careem blow Dubai Taxi out of the water in the low-cost arena. Both offer a cheaper per km cost, and a significantly cheaper base fare if you pre-book. Dubai Taxi falls much more in line on the base fare if you venture out into the streets and hail a passing cab.

Other notable tidbits include, Careem having a more expensive per km rate than Uber for its business class cars, but a lower minimum fare, which could mean that taking a short-distance ride in a fancy car might actually work out cheaper with Careem.

Careem works out a Dirham cheaper for both the base and minimum fare when comparing its Economy cars with Uber Select, however the higher cost per km (by 43 fils, no less) will most likely even things out between the two services, depending on the distance of your ride.

Overall, it appears that Uber is the clear winner, as it manages to keep its cost per km rate considerably lower than the competition across all categories.

While the base and minimum fare vary depending on the type of car you book, a majority of the time you’re likely to exceed both, and therefore want to keep the cost of your trip as low as possible with a cheaper cost per km rate.

In our second infographic we wanted to compare Uber and Careem’s low-cost options against Dubai Taxi for the cheapest possible ride between popular Dubai landmarks. 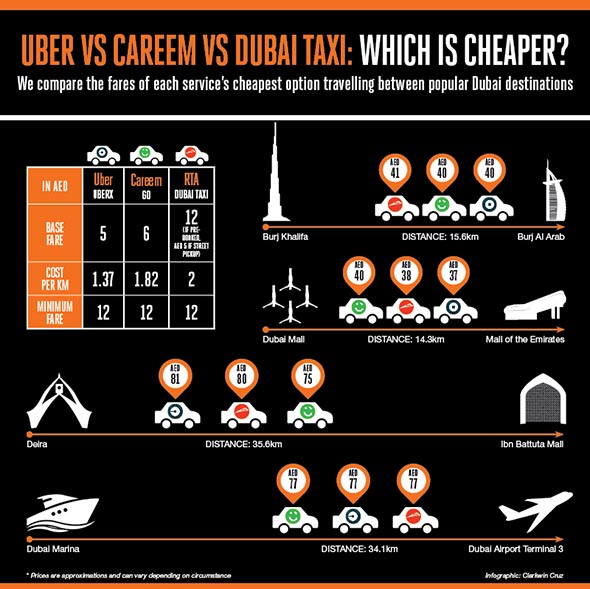 In this instance, both UberX and Careem Go came away with three lowest fares each, and in some instances managed to match each other pretty much to the Dirham (we rounded up for convenience’s sake).

The only anomaly is on a trip from Deira to Ibn Battuta Mall, Careem Go is a whole Dhs5 cheaper than the competition. We think this may either come down to Salik or the fact that we asked for rates without giving a specific landmark in Deira as a starting point, our bad

What’s evident, is that there’s only a discrepancy of 2-3 Dirhams maximum between all three services, meaning regardless of which low-cost option you decide to take, you needn’t stress too much that you’re over-paying. Good news for everyone then.

Transport
EDITOR’S PICKS
Here's the full list of UAE public holidays in 2023
READ MORE
23 incredible things to look forward to in the UAE in 2023
READ MORE
Hidden gems: 10 UAE desert pop-ups to discover this winter
READ MORE
Where to travel in 2023: 10 new flight routes from the UAE
READ MORE
MOST POPULAR
The UAE law changes on marriage, divorce and child custody to know about from February 1
5 fabulous new Dubai hotels to check-in to
Pics of the week: Your best photos of the UAE
Dhow & Anchor has got you covered every day of the week
RTA: All the road closures you need to be aware about
YOU SHOULD CHECK OUT
Our website uses cookies and other similar technologies to improve our site and your online experience. By continuing to use our website you consent to cookies being used. Read our privacy policy here.