How cool is this…

2018 has been declared the Year of Zayed, marking 100 years since the birth of the UAE’s founding father, Sheikh Zayed bin Sultan Al Nayhan.

It’s been described as an occasion to share memories of the man – and some amazing gems are already emerging from the archives.

Dr Zaki Nusseibeh, who was Sheikh Zayed’s chief interpreter, recently shared a photo of the late leader shaking the hand of none other than a young Justin Trudeau.

According to Dr Nusseibeh, the photo was taken in 1983, when the future Prime Minister of Canada was just 11 years old.

Apparently, he was accompanying his father – Pierre Trudeau, who was Canada’s PM at the time – on a state visit to the UAE. 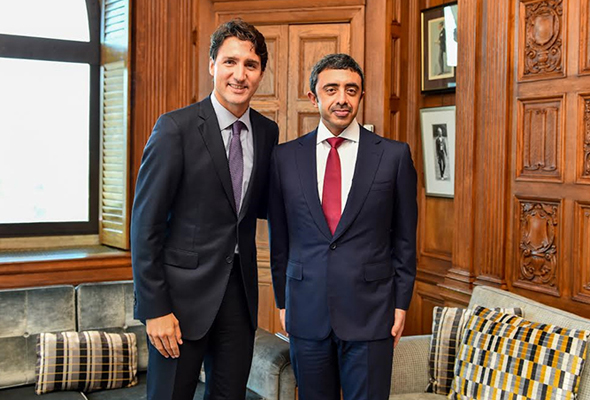 Culture
EDITOR’S PICKS
So, when is the next UAE public holiday in 2021?
READ MORE
All of the lavish new hotels set to open in Dubai in 2021
READ MORE
16 of the best pool passes in Dubai that are fully redeemable
READ MORE
All of the restaurants at West Beach, Palm Jumeirah
READ MORE
MOST POPULAR
Abu Dhabi tourists can now get free vaccines through SEHA
Before and after: Stunning photos capture Dubai’s incredible transformation
Etihad wins Best Cabin Crew and Frequent Flyer Programme awards
Flash sale: This Dubai hotel has 40 per cent off and free attraction tickets
The best deals we've found in Amazon's Prime Day sale
YOU SHOULD CHECK OUT
Our website uses cookies and other similar technologies to improve our site and your online experience. By continuing to use our website you consent to cookies being used. Read our privacy policy here.