Here are 10 things to do in Dubai this December

It’s hard to believe December is nearly here… Dubai has plenty in store for its residents and visitors during the last month of the year. As well as annual sporting event Dubai Rugby Sevens and all the usual festive fun and games, we’ve got film, extreme sports and mega brunches to look forward to.

Here are 10 things coming up in Dubai this December…

1. December 1 to 3: A global rugby tournament descends on Dubai 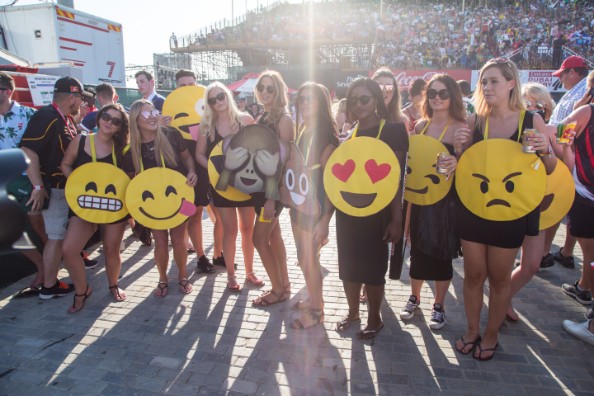 The Dubai Rugby Sevens is one of the most anticipated weekends on the Dubai calendar, and it’s happening this Thursday, Friday and Saturday. As well as the small matter of the annual rugby tournament, there’s music, street food and fancy dress all to look forward to.

The Dubai International Film Festival rolls around once again this December, and it’s bringing a week of interesting international film screenings and a host of A-listers to the city. You’ll be able to mingle with the likes of Patrick Stewart, Cate Blanchett and Sarah Jessica Parker across the seven days of events, as well as catching films across the city at Galleria Mall, The Beach JBR and the Madinat. 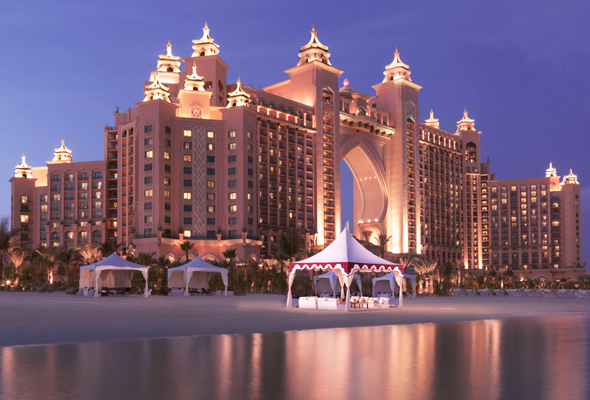 Remember how Atlantis put on a special ‘night brunch’ in May? Well, it’s returning, and it will be mighty festive. Cirque de Cuisine: The Festive Edition will be on Thursday December 7, and will run from 7pm to 11pm (with a cash bar after party hosted in The Avenues until 3am). The terrace at Gordon Ramsay’s Bread Street Kitchen will be turned into a Christmas market complete with snow, picnic tables and festive games. Plus, there will be candy cane stilt walkers, a festive choir singing under a giant wreath arch at the entrance and a huge snow globe from which you’ll be able to snap a selfie. Also, the Lost Chambers Aquarium will be partly transformed into an underwater Christmas Grotto where you’ll be able to fill out a festive postcard and give it to Santa and his elves to send to a loved one overseas.

4. December 7 to 9: See something magical at the opera 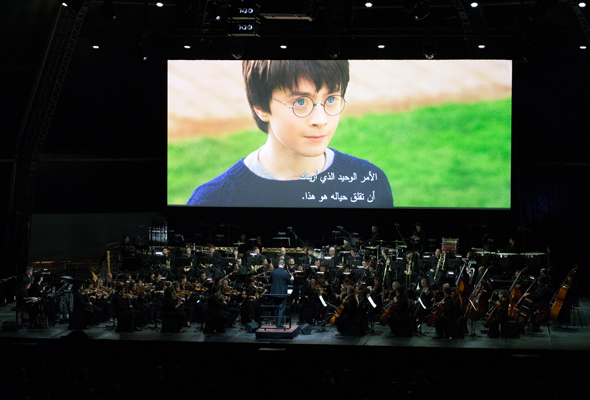 For all those muggles who missed out on the spellbinding Harry Potter concert in Abu Dhabi, they can catch it at Dubai Opera this month. You’ll be able to see your favourite bespectacled hero on a 40-foot screen, with the Czech National Symphony Orchestra performing the iconic John Williams score. Tickets start from Dhs175.

The twice rescheduled Elton John concert is set to go ahead this December, almost a year after the initial date of December 15 2016. The musical legend is set to perform his first ever live show in Dubai as a part of his Wonderful Crazy Night tour. With over five decades of performing across the world and more than 4,000 gigs, he is considered to be one of the most accomplished live musicians in the world. Remember, this gig is dry. 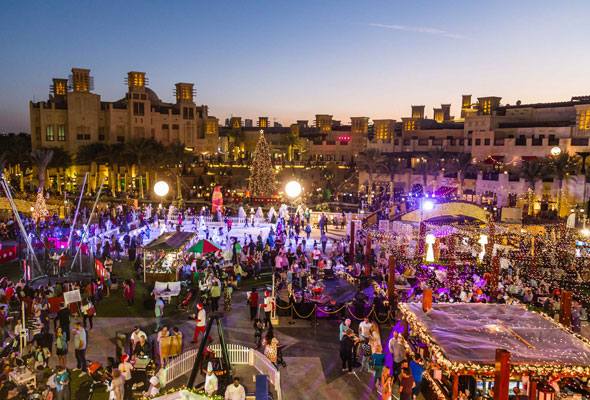 Madinat Jumeirah will welcome back its annual Festive Market this December from the 15th to 27th. The 1,750 square metre winter wonderland will feature a German-style Festive Market, as well as rides on an abra boat with Santa, dozens of slides and games, a North Pole train for the little ones and a giant snow ball zone. New this year will be a shimmering interactive LED Christmas tree and daily appearances from Santa himself… at 5pm and 7pm. 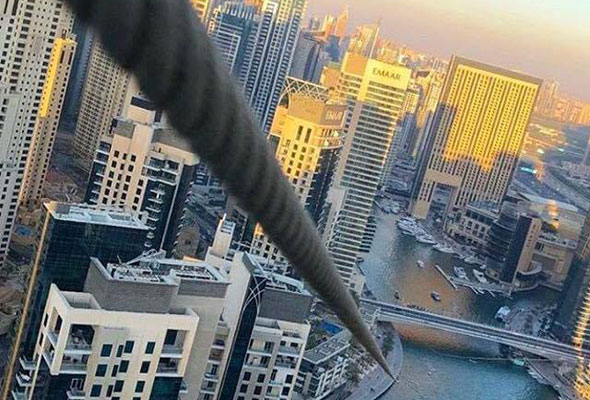 XDubai, the people that brought you that epic zipline over The Dubai Fountain, are back with a brand new feat’ for all adrenaline junkies in Dubai to try. Described as the world’s longest urban zipline, the line stands at 170 metres tall at the launch platform, and runs right the way across the Marina, ending at The Address next to Dubai Marina Mall. It starts at the very top of a tower in Marina Promenade, so yes, you’ll basically launch off of a skyscraper. 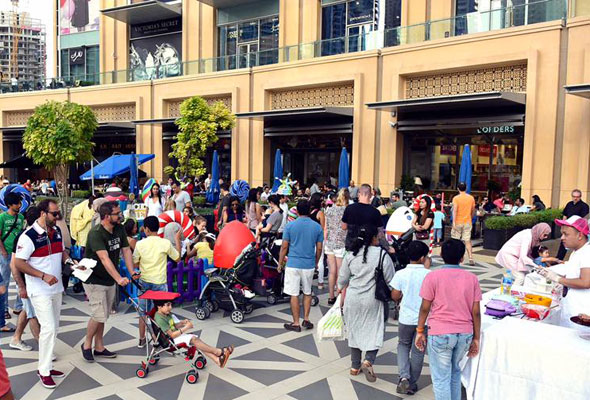 The 2017 theme of The Dubai Marina Music Festival (DMMF) is ‘The Art of Sound’. It’s going to transform the Dubai Marina promenade into a series of activations and installations, that explore all of the senses, plus host music artists and performers, food stalls and a pop up market. 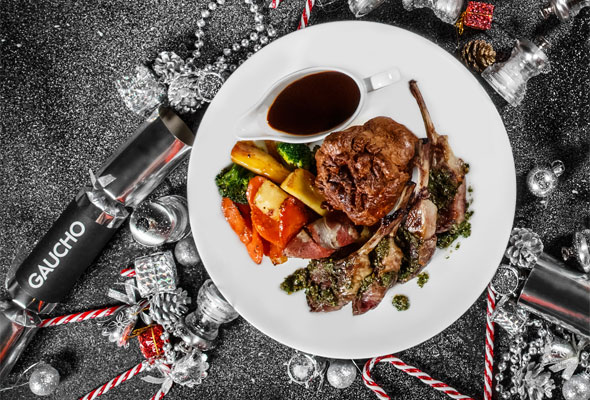 It’s the most wonderful time of the year (as the Christmas song goes) and as December 25 rolls around once more, there are heaps of ways to celebrate it. Whether you’re staying in, going out, tucking into a turkey with all the trimmings or enjoying an alternative feast, Happy Christmas from team What’s On!

Various locations across the city, see our guide to Christmas Day meals in Dubai to try.

As another year draws to a close, it’s time to say goodbye to 2017 Dubai-style. From record-breaking firework displays, to private dinners that cost upwards of Dhs100,000, to more modest celebrations, brunches, parties and dinners, we hope your last day of 2017 is a memorable one.

Various locations across the city, see our guide to New Year’s Eve in Dubai

Christmas
Things to do
EDITOR’S PICKS
9 royal-approved Dubai restaurants
READ MORE
12 incredible rooftop pools in Dubai to check out
READ MORE
16 of the best beach bars in Dubai for sundowners
READ MORE
Covid-19 rules in Dubai: all the updates you need to be aware of
READ MORE
MOST POPULAR
You can now do watersports at Cove Beach Abu Dhabi
Watch: This is what it will be like to ride the Virgin Hyperloop
Five of the coolest places to go glamping in the UAE this weekend
These are the most lavish Valentine's Day packages in Dubai
What we know about the Zayed National Museum coming to Abu Dhabi
YOU SHOULD CHECK OUT
Our website uses cookies and other similar technologies to improve our site and your online experience. By continuing to use our website you consent to cookies being used. Read our privacy policy here.