The team on the ground told us it will open in about a week!

XDubai, the people that brought you that epic zipline over The Dubai Fountain, are back with a brand new feat’ for all adrenaline junkies in Dubai to try.

Residents of Dubai Marina may have noticed wires being strung across the water near the Dubai Marina Mall recently. Well, the famous XLine has recently re-appeared across Dubai Marina, and it looks like it’s going to be equally as exciting as the first.

Described as the world’s longest urban zipline, the line stands at 170 meters tall at the launch platform, and runs right the way across the Marina, ending at The Address next to Marina Mall. It looks like it starts at the very top of a tower in Marina Promenade (so yes, you’ll basically launch off of a skyscraper): 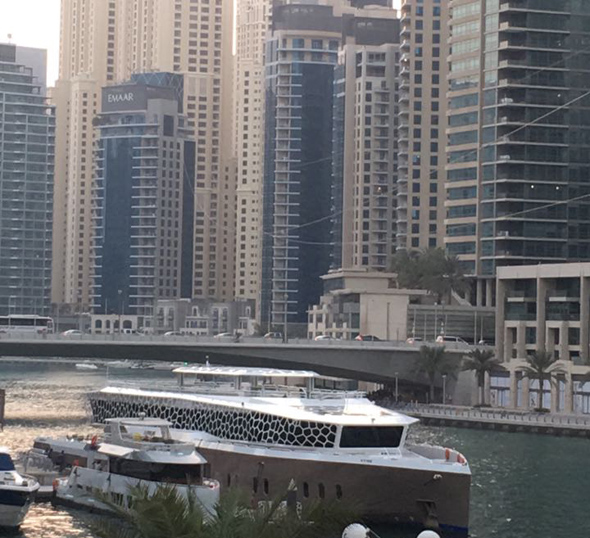 It’s one for speed fiends too, as XDubai has said it will reach speeds of 60kmh just 2.5 seconds after you launch off.

And that’s not all, the one kilometre line will also be a double line, meaning you and a friend can zip across the Marina at the same time. That’s right, a zip line for two.

Here’s a video of the zipline route (click to play):

*ALSO READ: Here are 15 fun new things to do in Dubai this month*

Exact details of opening hours haven’t yet been released, but it will be priced from Dhs650 for a solo rider, and Dhs1200 for a couple.

In the meantime, let’s relive the XLine near Dubai Mall:

News
Outdoor
Sport & Fitness
EDITOR’S PICKS
So, when is the next UAE public holiday in 2021?
READ MORE
All of the lavish new hotels set to open in Dubai in 2021
READ MORE
16 of the best pool passes in Dubai that are fully redeemable
READ MORE
All of the restaurants at West Beach, Palm Jumeirah
READ MORE
MOST POPULAR
Burj Khalifa tops list of most searched-for bucket list experiences
There's massages and panoramic views at the highest spa in Dubai
7 beautiful things to do in Abu Dhabi this weekend: June 24 to 26
10 amazing things to do in Dubai this weekend: June 24 to 26
Celebrate 40 years of JA with 40 per cent off these top resorts
YOU SHOULD CHECK OUT
Our website uses cookies and other similar technologies to improve our site and your online experience. By continuing to use our website you consent to cookies being used. Read our privacy policy here.