Watch: Dubai Police show off some cool new additions to their fleet

How cool exactly? How does an uber-luxury Rolls-Royce and a concept hoverbike sound?

The Dubai International Motor Show is currently underway and as anyone who’s a fan of souped-up speed machines knows, Dubai Police have one of the most impressive fleets of vehicles on the planet.

Our boys in green and white took the opportunity to show off some new additions in a video posted to social media earlier today.

Taking centre stage was a brand new Rolls-Royce Wraith, decked out in sleek Dubai Police decal. The uber-luxury 4-seater is one of the most luxurious cars in the world, valued at around Dhs1.2 million and the most powerful Rolls-Royce ever made.

.@DubaiPoliceHQ adds one of the world’s most luxurious car to its fleet .. Rolls-Royce. pic.twitter.com/NL8PSWQtSl

The video also showed off what appears to be a concept hoverbike from BMW that is based off the company’s R1200GS motorbike.

Earlier this year Danish toy company LEGO developed the concept as an alternative build to one of their popular Technics sets and, as reported by Wired, BMW went on to build a life-sized prototype, which has clearly found its way to the Dubai Police. 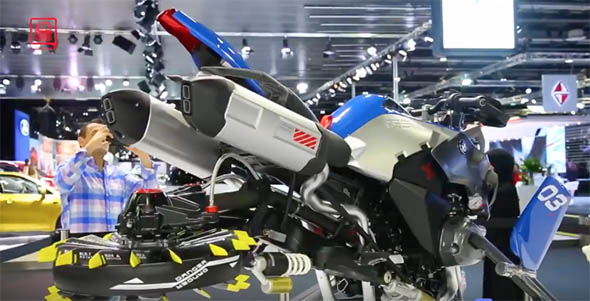 Whether we’ll see it patrolling up and down Sheikh Zayed Road in the near future is anyone’s guess, but judging by the rest of the of the awesome vehicles in their fleet it’s definitely not outside the realm of possibility.