Dubai Frame to open next week

An opening date is still to be confirmed, but the official inauguration is set to take place next week.

We’ve been looking forward to the opening of Dubai Frame for a long time now – and now it’s been reported that it will open to the public next week.

The official inauguration of the project will take place next week and the public will be able to visit the Frame from the next day, Hussain Nasser Lootah, Director General of Dubai Municipality told Gulf News.

An exact date has still not been given. 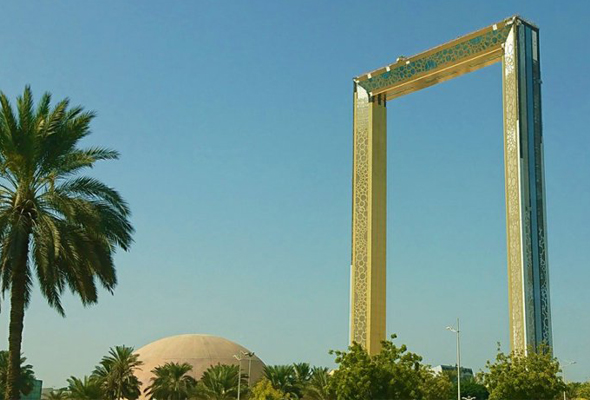 The same report outlined that the frame will not be free during the opening period, and that the amount of visitors allowed in will be limited.

Visitors will be able to purchase tickets through a website that will be launched soon, and also at the ticketing counters.

The new tourist attraction, located in Zabeel Park, was originally slated to open in 2015, but opening was postponed until after the opening of the hotly awaited Dubai Safari, which opened last week.

“Dubai Frame is one of the unique projects that Dubai Municipality is keen to implement. It is an aesthetic icon and an architectural landmark that culturally connects the past with the present, and an important attraction for visitors, tourists and residents alike,” Al Mutaiwei said.

“It is expected to attract about two million tourists annually.”

Dubai Frame consists of two transparent 150-metre-high towers that are connected by a 93-metre bridge at the top.

A panoramic elevator will take visitors up to the bridge, where they can admire the views over old and new Dubai.

News
EDITOR’S PICKS
UAE holiday dates announced for National Day
READ MORE
Emirates Dubai 7s is back: Here's why we're excited...
READ MORE
Tennis ace Andy Murray to play at Mubadala World Tennis Championship
READ MORE
UAE 50: Where to watch National Day fireworks in Dubai
READ MORE
MOST POPULAR
Omicron update: What the UAE is doing to tackle the new variant
This lively new brunch brilliantly blends Brazilian and Lebanese cuisines
There's a special lights and fountain show at Burj Khalifa tonight
RTA announces free parking in Dubai for National Day
Everything you need to know about Emirates Dubai 7s
YOU SHOULD CHECK OUT
Our website uses cookies and other similar technologies to improve our site and your online experience. By continuing to use our website you consent to cookies being used. Read our privacy policy here.