Brit Liam Bek took on the mountainous challenge, known as Everesting, on Friday in the capital’s garden city. He’s the third athlete in the UAE to attempt the incredible test of endurance

Have you ever driven or cycled up Jebel Hafeet in Al Ain? Then you’ll know it’s a pretty steep mountain. But last Friday, one cyclist took it upon himself to ride up it not once, not twice, but an impossible TWELVE times.

English teacher Liam Bek, 38, is from Birmingham in the UK, but lives in the capital and in his spare time he rides for Adventure HQ’s cycle team here in the UAE.

And on Friday, he decided to try Everesting – where you cycle up a hill multiple times until you complete the same elevation gain you would get if you cycled up Mount Everest. You need to climb 8,848m or more to join the club (there is even a website with a hall of fame you can join).

Incredibly, he’s not the first cyclist in the UAE to attempt it. Bek is actually the third known person in the UAE to succeed at Everesting up Hafeet. Fellow UAE resident Andrew Kaszubski completed it in 2015 and Aussie rider Dean Mason also completed the challenge in December of last year. Mason also completed an Everesting attempt up Jebel Jais in Ras Al Khaimah last year. He rode up that one nine times.

Bek recorded his ride on the popular fitness app Strava, and as you can see from his data in the grab below, that he actually went much further – he climbed 9,306m in an incredible 13 hours and 15 minutes of moving time. The climb at Hafeet is about 12km long with an average gradient of 7 per cent, with spikes up to 11 per cent in parts. He cycled almost 260km during his attempt. He currently holds the record though, because an Everesting attempt also includes break times, for food, toilet stops and rest. “Recording your elapsed time is one of the rules of Everesting,” Bek exclusively told What’s On. His complete elapsed time of 16 hours 32 minutes is two hours and 50 minutes faster than Mason’s attempt in December. 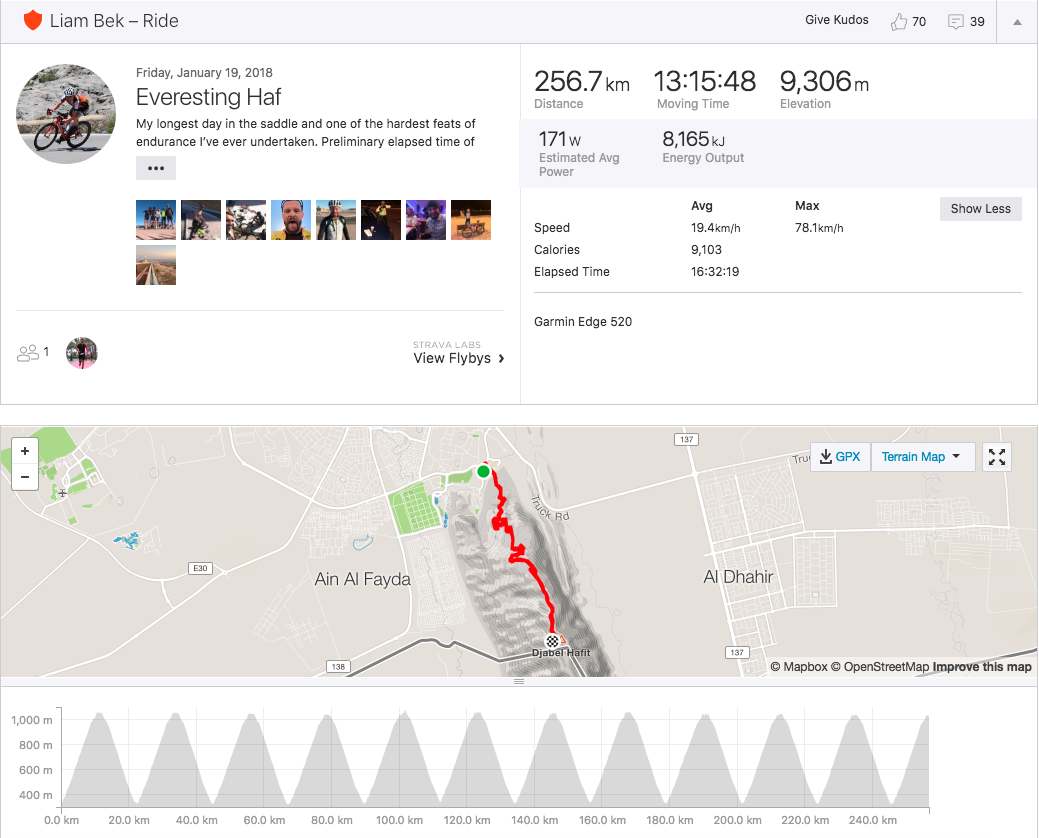 “After a lazy Christmas, I needed a new challenge to snap me out of my lethargy and kick-start 2018,” says Bek. “I’d been thinking and talking about making an Everesting attempt for a little while. I decided there was no time like the present!” Bek started his epic ride at 3.17am and finished at 8pm.

He got ready for his attempt by riding mountains in Oman, and regularly visiting the garden city’s mountain. “I only trained for about two weeks (something I do not recommend) and I went to Oman and rode up one of the hardest climbs there a couple of times, then did four Jebel Hafeets the next day, then a few days before the big challenge I did Hafeet six times.”

Not surisingly, it wasn’t an easy task at all. “I was reasonably confident of my ability to complete the 12, and I started steady and controlled, with friends joining me at dawn to bring me to six climbs,” he adds. “They were the ‘easiest’, and most enjoyable in many ways. I took a proper lunch break, and felt strong on the seventh. But I did the eight, ninth and tenth solo, and they were mentally and physically hard. I started feeling nauseous on the ninth climb and that’s when the demons really set in. Luckily I rode through it, started to feel better and was joined by other friends for 11 and 12. I was so close to cramping on the last two climbs, that every movement had to be completely controlled with no sudden changes in pace.”

Bek has a good idea where it stands in his list of lifetime achievements: “It was one of the hardest things I’ve ever done. Support notwithstanding, I was a broken man by the end, as those who were there will attest. ”

Cycling’s professionals will also climb Hafeet in February during the Abu Dhabi Tour, but they’ll only do it once, the lightweights.