The World Doctors Orchestra is coming to Dubai Opera

They’re swapping their stethoscopes for instruments of a different kind…

The idea of an orchestra made up entirely of doctors might sound like the basis of a new TV show – think Glee crossed with Grey’s Anatomy.

But it’s a real thing. And it’s coming to Dubai.

On March 22, the World Doctors Orchestra will make its Dubai Opera debut, under the patronage of HH Sheikh Mohammed bin Rashid Al Maktoum, vice president of the UAE and ruler of Dubai.

Founded in 2007, the orchestra is made up of physicians from more than 50 countries, many of whom have a professional musical background (as well as a medical one). 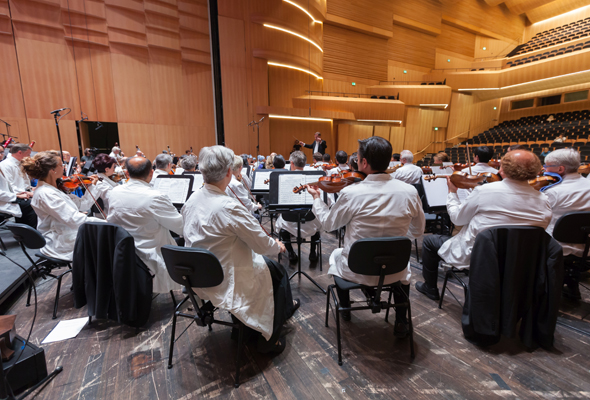 The orchestra uses its talents to raise funds for medical projects, and in Dubai, they will be raising money for the Al Jalila Foundation, with 100 per cent of proceeds going towards its healthcare programs.

Classical music fans can look forward to performances of music written by composers such as Beethoven and Mendelssohn, as well as the world premiere of a piece titled Positive Spirit, inspired by a poem by Sheikh Mohammed.

Here’s a taste of what you can expect:

A night of culture for a great cause? Sounds good to us. Tickets are available via the Dubai Opera website, starting from Dhs250.

Culture
EDITOR’S PICKS
UAE holiday dates announced for Eid Al Adha
READ MORE
Another update: Emirates extends suspension of flights from India to UAE
READ MORE
Coming soon: Everything we know about Ain Dubai so far
READ MORE
Khorfakkan set to open new tourist attraction 580 metres above sea level
READ MORE
MOST POPULAR
A new upscale Chinese restaurant with karaoke is opening in Dubai
Feast on the best unlimited chicken wing deals in Dubai
It's Dhs350 to brunch, stay and play at the What's On Lock In this weekend
6 great things to do in Abu Dhabi this week: July 25 to 28
6 fun things to do in Dubai this week: July 25 to 28
YOU SHOULD CHECK OUT
Our website uses cookies and other similar technologies to improve our site and your online experience. By continuing to use our website you consent to cookies being used. Read our privacy policy here.