This A380 flight was carried out entirely by women…

Thursday is International Women’s Day, and Dubai-based airline Emirates has paid tribute to its female employees in a cool new video.

The clip offers a behind-the-scenes glimpse at a recent flight from Dubai to San Francisco, which was prepared and operated entirely by women.

Watch the video of the “superwomen flight” here:

The Emirates A380 aircraft was piloted by Captain Patricia Bischoff from Canada and First Officer Rebecca Lougheed from the UK, with cabin crew led by the purser Weronica Formela from Poland.

As well as the flight crew, an all-women team worked on all ‘above wing’ and ‘below wing’ activities in the lead-up to flight departure, including ramp operations, flight dispatch, catering, security and more. 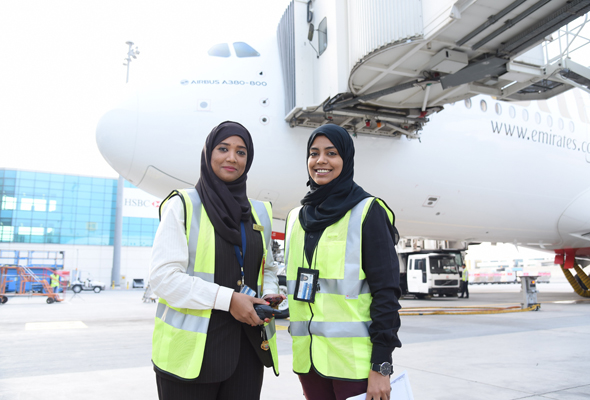 In total, a team of more than 75 women from more than 25 nationalities – including Emirati women – worked on the flight.

Women make up over 40 per cent of the workforce at Emirates, with the majority working as cabin crew.

Travel
EDITOR’S PICKS
UAE holiday dates announced for National Day
READ MORE
Emirates Dubai 7s is back: Here's why we're excited...
READ MORE
Tennis ace Andy Murray to play at Mubadala World Tennis Championship
READ MORE
UAE 50: Where to watch National Day fireworks in Dubai
READ MORE
MOST POPULAR
UAE confirms its first case of the Omicron variant
Alhosn Green Pass to only be valid for 14 days after negative PCR
20 of the best things to do in Abu Dhabi this long weekend: Part 2
First look: London-loved restaurant The Cinnamon Club opens in Dubai
Check out this amazing display at the world's highest outdoor infinity pool
YOU SHOULD CHECK OUT
Our website uses cookies and other similar technologies to improve our site and your online experience. By continuing to use our website you consent to cookies being used. Read our privacy policy here.