One Direction alumnus Liam Payne was in Dubai last weekend for a special concert at Global Village. The singer took to Instagram after the show, triumphantly telling his followers: “I just played to the biggest crowd of my life”.

American rapper Flo Rida took to the stage at two of Dubai’s superclubs last weekend, but also had a turn in the audience at the Franco Dragone spectacular, La Perle. 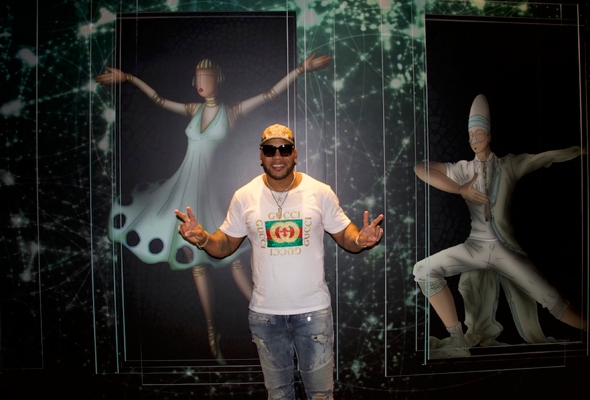 Diddy’s girlfriend, Me & U singer Cassie, and son Justin Dior Combs appear to have joined the superstar in Dubai. The pair were spotted at recently-opened celebrity hotspot 1 Oak in Business Bay.

Game of Thrones fan favourite Kristian Nairn, aka Hodor, has arrived in Dubai for the Middle East Film & Comic Con this weekend. The star shared a picture of his hotel treats – that’s either a miniature bed made out of cake, or some really gigantic fruits.

Kiwi action star Karl Urban is also in town for Comic Con. The Thor: Ragnarok star seems to have been making the most of his down time, enjoying a supercar hoon around the Dubai Autodrome.

Celebrity chef Masaharu Morimoto, who starred on the cooking show Iron Chef, opened his first Dubai restaurant in the Renaissance Downtown Hotel last week. The charismatic chef himself was in town to ensure it all went smoothly.

I had a wonderful time at the grand opening of @MorimotoDubai! Here are a few fun shots from that night. I look forward to many more fun times there. Kampai! . . . . . #IronChefMorimoto #IronChef #Morimoto #morimotodubai #dubai #grandopening #newrestaurant #kampai

Ex on the Beach star Chloe Goodman has been holidaying in Dubai this week. The glamour model shared this snap from Palm Jumeirah hotspot The Penthouse at FIVE.

rooftop pre drinks ? thank you so much @dubaikey ! the holiday wouldn’t have been the same without you guys setting everything up! everything tagged

Abu Dhabi has been full of Bollywood stars over the last few weeks, with the shoot for upcoming action film Race 3 (starring Salman Khan) taking place in the capital. Sri Lankan actress Jacqueline Fernandez shared this photo from the Abu Dhabi desert.

The earth has music for those who listen #shakespeare ?? #abudhabi

Indian actress Daisy Shah, who also stars in the film, appeared to take some time out to swing by a fashion event in Dubai over the weekend.

Nigerian singer Simi has also been holidaying in the emirate this week. The star shared some fun snaps of her vacation, including this classic desert adventure shot: