It’s one of a number of hotly anticipated openings in the city in 2018, and yet another detailed has been revealed about Bluewaters Island this week. The new Dhs18 billion destination off JBR is set to become home to a second serving of famous Las Vegas hotel, Caesars Palace.

The collaboration between Caesars Entertainment and Dubai based developer Meraas will see two luxury hotels, a conference centre and brand new beach club all open later this year. Although no details of what this will look like are being released, if it’s anything like the famous Las Vegas version we’re expecting some pretty lavish, roman-inspired decor.

Unlike it’s Las Vegas counterpart, it will not be home to a casino. 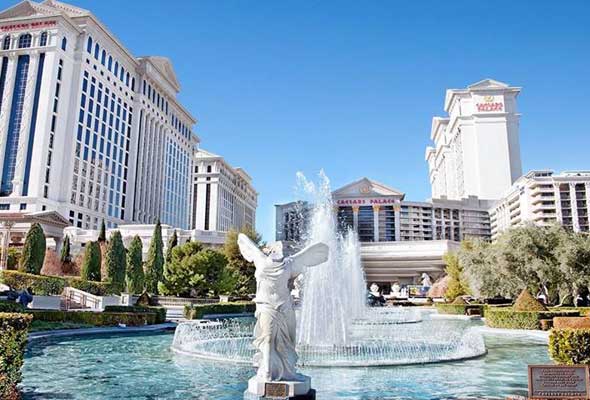 ALSO READ:
This ultra-luxury hotel is opening on The Palm this year
7 hotels opening in Dubai in 2018

The first of the two hotels, Caesars Palace Bluewaters Dubai will be the world’s second Caesars Palace and feature 178 rooms, one indoor and two outdoor swimming pools, a 630-square-metre spa and health centre and six restaurants.

Both hotels will share a 450 metre stretch of private beach.

And they’re not the only thing to look forward to. At the centre of Bluewater you’ll find Ain Dubai, the 210-metre-high observation wheel which is set to become the largest and highest in the world.

Once open, Bluewaters island will be linked to the mainland via direct links from Sheikh Zayed Road, a driverless rapid transit service to Ibn Battuta Metro and a 265m pedestrian bridge from The Beach area at JBR.

Staycations
EDITOR’S PICKS
So, when is the next UAE public holiday in 2021?
READ MORE
All of the lavish new hotels set to open in Dubai in 2021
READ MORE
16 of the best pool passes in Dubai that are fully redeemable
READ MORE
All of the restaurants at West Beach, Palm Jumeirah
READ MORE
MOST POPULAR
Etihad launches sale fares to quarantine-free destinations
Review: Duo brunch at Chamas and Cho Gao, InterContinental
Here are 6 new spots to enjoy an afternoon tea in Dubai
SLS Dubai launches summer staycation offer
Chic bar Siddharta Lounge launches ladies' night for the first time ever
YOU SHOULD CHECK OUT
Our website uses cookies and other similar technologies to improve our site and your online experience. By continuing to use our website you consent to cookies being used. Read our privacy policy here.