So in case you were wondering who to keep an eye out for at The Dubai Mall, we’ve put together a list of some of the famous faces spotted in Dubai and the UAE this weekend…

It’s been a busy week in Dubai for A-list couple Will and Jada Pinkett Smith. From skydives to dinner in d3, as well as snapping some epic selfies up the Burj Khalifa, they’ve been sure to fill their time with some top activities in the city.

A thousand years from now, humans are gonna look at the Burj Khalifa the Same way we look at the Pyramids… like “How the hell did they build that?”. But then they’ll just look it up on YouTube. This #Pixel3 group selfie mode is Crazy!!

Although we’re not entirely sure whether they’re here for business or pleasure, Will Smith took to Instagram to share that he can’t wait to show his fans what the family have been filming. We can’t wait either, Will.

Actor, singer and son of Will and Jada Smith, Jayden Smith also made a flying visit to Dubai while his parents were here. Although he didn’t share any snaps to his own social media, his dad was sure to share this prank with his 23.6 million followers.

Former Geordie Shore star Vicky Pattinson clearly knows how to make the most of her time in Dubai. She’s been here for the last few days, and she’s basically been to every one of our favourite party spots in the city; from ladies’ day at FIVE to brunch at STK Downtown, to a Saturday party brunch at Zero Gravity.

Jamaican cricketer Chris Gayle has been spotted vacationing in the Emirate this week, and like most tourists, he’s been sure to head to some of the city’s most iconic spots. He shared this snap of him enjoying a coffee outside the fountains earlier this week.

Last night the @vengaboys lit up the sky! – And on Saturday they’re be back to do it all over again at SuperNatural pool and beach brunch! – #TheVengaboys #Encore #SuperNatural #ZeroGravityDubai #BeachClub

Vengaboys first Dubai gig proved so popular on Thursday evening, that Zero Gravity announced a last-minute encore gig would take place two days later. Thousands of fans turned out to the Dubai beach club to catch the Eurodance act perform some of their biggest hits including Boom Boom Boom and We Like To Party. 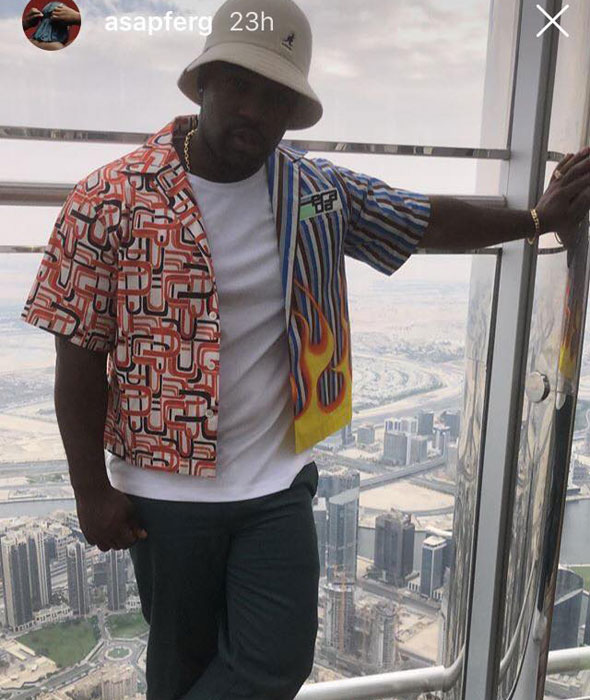 In town to perform at swanky clubs Base and 1OAK, American rapper ASAP Ferg also made sure to see the sights, taking to Instagram stories to post a snap at the Burj Khalifa.

Brunching vibes at @hiddenbrunch thank you @inside.lifestyle for sorting as always!???

Another star who clearly knows how to party in Dubai is Love Island alum, Kady McDermott. While on holiday with friends, she’s been snapping pics at Hidden brunch, enjoying dinner at STK and brunching with the Vengaboys at Zero Gravity.