If you haven’t made plans for New Year’s Eve yet, don’t panic. There’s a whole lot going on in the capital, whether you’re wanting a big night, or prefer a slightly more low-key affair. Here’s where to celebrate New Year’s Eve in Abu Dhabi. 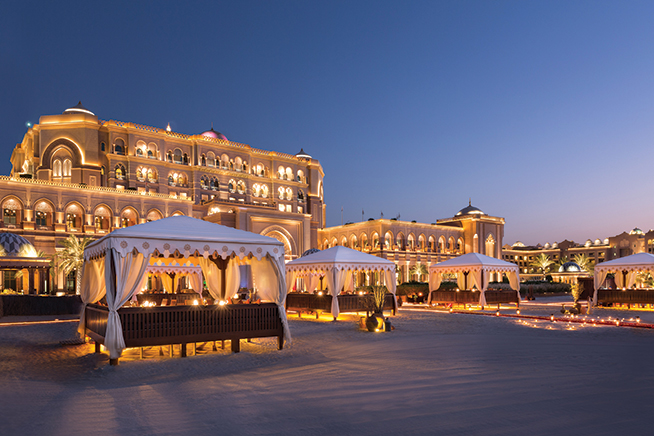 Enjoy a seven-course meal right on the beach this year at BBQ Al Qasr at Emirates Palace, while soaking up one of the most beautiful views in the city. This offer includes front-row seats to the capital’s most breathtaking New Year’s Eve fireworks show, too.

It’s all ‘80s under the stars as you ring in 2019 alfresco at the Intercontinental Abu Dhabi’s Belgian Cafe. Enjoy a set menu of Belgian specialities or choose free-flowing drinks paired with Belgian samplers. 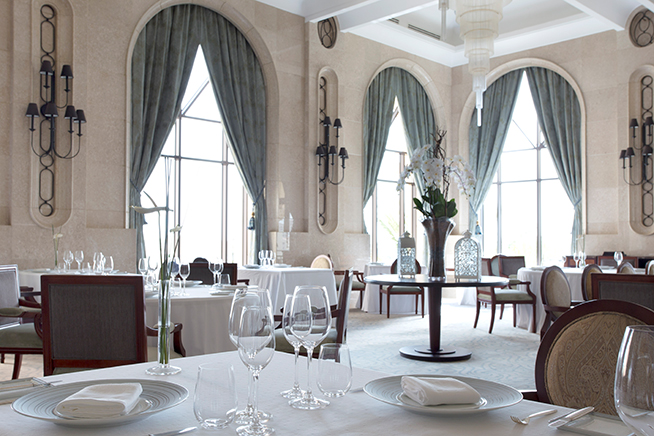 Take in an exquisite eight-course meal with the Bonne Année dinner menu, designed to transport guests to the cobbled and winding streets of Paris. The meal includes access to live entertainment and fireworks over the beautiful canal, complete with views of the Sheikh Zayed Grand Mosque.

The beach at St Regis Saadiyat Island Resort is where it’s at this year. The party includes live go-go dancers and a special performance by DJ Sam Popat of Buddha Bar Paris. The chic venue also offers unparalleled views of the fireworks and a range of food and beverage packages.

Buddha Bar Beach, St Regis Saadiyat Island Resort, Abu Dhabi. 8pm to 3am. Packages from Dhs600 for the after party, with unlimited selected drinks (from 11pm) up to Dhs1,000 for a four-course dinner featuring Pan Asian cuisine and unlimited drinks. Tel: (02) 4988888. marriott.com

Everyone loves a place to celebrate without pricey entrance fees and this year, Loca in Abu Dhabi is one of those venues. This New Year’s Eve fiesta choose from a range of peppy cocktails and spicy Mexican treats, including caldo de pollo rojo – a chicken broth with guajillo chilli , chayote, zucchini and epazote and huarache de pavo which features corn masa, topped with roast turkey, black beans and tomatillo sauce with avocado and fresh cheese. And don’t forget the DJs Latin grooves.

Herald in the New Year at Horizon restaurant with a buffet. A special menu has been crafted by the team with an international flair and a family-friendly atmosphere. 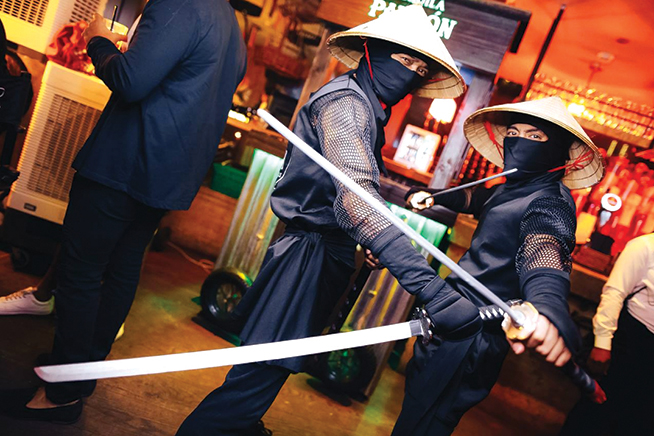 This will be the capital’s hippest New Year’s Eve yet with the newly opened Mr Miyagi’s at Yas Marina and the NYE Full Moon Party. Kicking off with a wok and roll brunch, karaoke and a selection of 2018’s biggest hits, there will be five courses and three hours of unlimited drinks to take advantage of too. Transport yourself to the shores of Koh Phanghan with UV paint, UV light shows from Mr Miyagi’s sake samurais and dance the year away with the best in festive classics, house, cheese and Miyagi favourites. 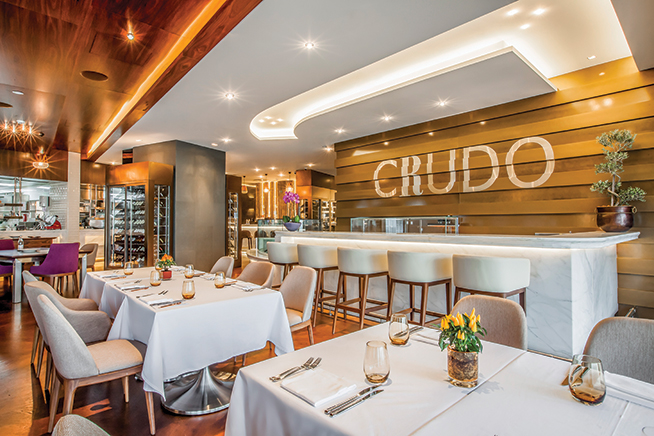 Journey back to the drizzly night of November 28, 1966 when the American Truman Capote threw an over-the-top party for more than 500 guests with black and white themed celebrations at Roberto’s Abu Dhabi. Just as it was then, each guest will be given a mask, rendering them equal and anonymous. The evening includes a three-course New Year’s Eve menu, featuring Roberto’s signature dishes starring lobster, caviar, seabass grilled and salt baked prawns and oysters. Enjoy a clear view of the fireworks at Al Maryah Island, two live dancers, an illusionist and the sounds of resident DJ Nikola and later, DJ Adrian Eftimie, with festivities extending to 4am. 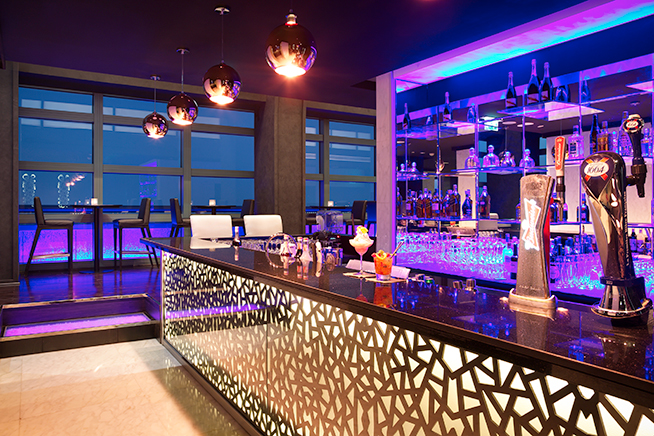 Celebrate the New Year with a Decade Party at Jazz & Fizz, featuring music from every generation, culminating in a spectacular fireworks display from Al Maryah Island. Or choose Grills@Chill’O and ring in 2019 with a bang at one of the capital’s most beautiful al fresco venues.

If a pub is more your thing and you can’t be bothered with fancy dress, high-priced tickets and  minimum spendsm, Sportsman’s Arms at Zayed Sports City is having a New Year’s Eve bash. There’s a New Year’s Eve brunch from 8pm to 12.30am, as well as a pure party that starts in the afternoon: so settle in on one of their three terraces, grab some barbecue bites and listen to a live band as you ring in 2019. 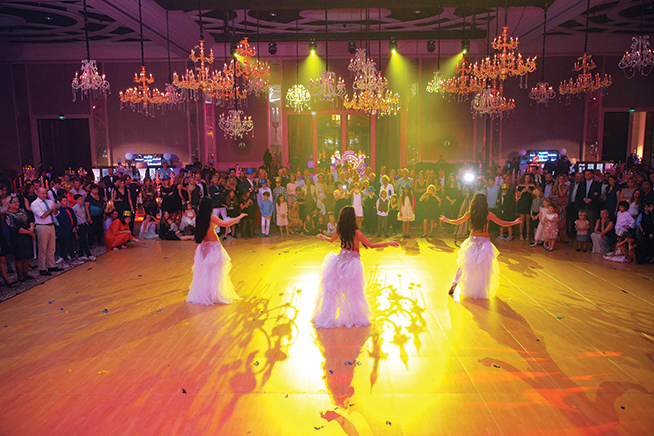 Honouring the St Regis legacy of lavish soirees, the resort’s Regal Ballroom will be the setting for a glamorous Great Gatsby-themed New Year’s Eve Gala. In addition to a sumptuous menu set to the sounds of a 10-piece live band, at the stroke of midnight it’s a mere stroll outside for fireworks from the seaview terrace before the DJ takes over. 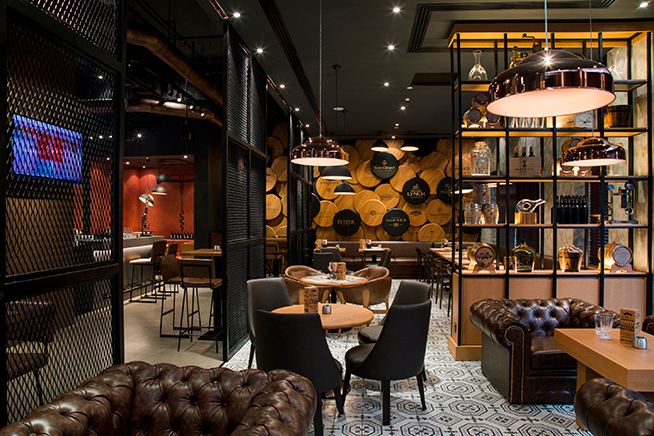 Abu Dhabi’s coolest new tapas bar has become one of the hippest hangouts in the city. Ring in 2019 with an a la carte menu of small plates and ring in the New Year in urban chic. 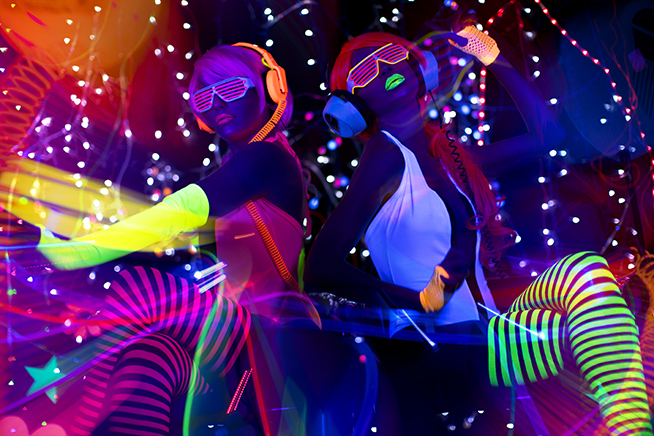 Get to the Glow Party and celebrate the New Year in style at the rooftop of Aloft Abu Dhabi. Great views, a live DJ mix, unlimited Asian and international buffet, unlimited house drinks, plus glow sticks and neon glasses, UV body and face paint.
Dress code: white or fluorescent colours.

Things to do
EDITOR’S PICKS
Dubai hotels and restaurants to suspend entertainment until further notice
READ MORE
9 royal-approved Dubai restaurants
READ MORE
16 of the best beach bars in Dubai for sundowners
READ MORE
Where to get the Covid-19 vaccine in Dubai, Abu Dhabi and across the UAE
READ MORE
MOST POPULAR
Dubai announces new restrictions on restaurants, gyms, weddings and social events
8 of the best homegrown burger concepts in Dubai
Direct Etihad flights to Qatar from Abu Dhabi are inbound next week
Dubai Health Authority answers your questions regarding the vaccination
Expo Dubai 2020: What’s inside the Sustainability Pavilion?
YOU SHOULD CHECK OUT
Our website uses cookies and other similar technologies to improve our site and your online experience. By continuing to use our website you consent to cookies being used. Read our privacy policy here.