Events
Things to do

The famous, family-friendly sports festival will make its return to Meydan on Friday October 25…

The World’s Ultimate Strongman is set to return to Dubai later this year with a bigger, better festival than ever before.

Taking place on Friday October 25 at the Meydan Grandstand, the one-day event promises plenty of activities for both spectating and participating in.

The World’s Ultimate Strongman sees athletes take on feats that require superhuman strength in a battle to be named champion. Last year’s winner, Games of Thrones star, The Mountain aka Thor Bjornssson, will return to Dubai to defend his title.

While the main event will see world-famous athletes battle it out to be named World’s Ultimate Strongman, there’ll be plenty of activities around the arena for guests to test their own limits.

At the Adrenaline Zone, guests can test their agility with an inflatable obstacle course, or head to the UFC Gym Experience Zone, where there’ll be mixed martial arts classes and displays.

Or why not head to the Carnival Games Zone, and see how many prizes you can win? Then, don’t forget to fuel up at the dedicated food truck park.

The family friendly event will also feature a petting zoo for the little ones, and even a mini strongman zone for strongmen-in-training. 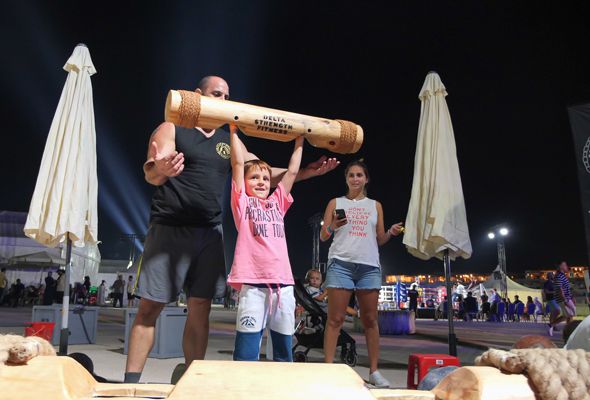 Tickets are on sale now, with early bird tickets priced at Dhs145. Early bird VIP tickets, inclusive of a four hour brunch, house beverages and athlete meet and greet are priced from Dhs695.

After early bird, tickets will be Dhs195 for general admission, and VIP packages will be priced from Dhs745. It’s free entry for children under 12.

Events
Things to do
EDITOR’S PICKS
Bla Bla: Dubai's huge new beach club is set to open this Thursday
READ MORE
16 of the best beach bars in Dubai for sundowners
READ MORE
Watch: A look inside Conor McGregor's Dhs20,000 per night Dubai villa
READ MORE
Where to get the Covid-19 vaccine in Dubai, Abu Dhabi and across the UAE
READ MORE
MOST POPULAR
Need a few laughs? These comedians are coming to Dubai in February
Is David Guetta going to perform in Dubai? It looks like it...
Amazonico Dubai launches new brunch and rooftop after-party
A stunning bright pink lake has been discovered in the UAE
Review: Goldfish Sushi & Yakitori, Dubai
YOU SHOULD CHECK OUT
Our website uses cookies and other similar technologies to improve our site and your online experience. By continuing to use our website you consent to cookies being used. Read our privacy policy here.