You can now take a ferry between Dubai and Sharjah

That’s one way to avoid the traffic…

The journey will take roughly 35 minutes, and runs every 30 minutes during peak hours between 5am and 9am and 4pm to 8.30pm, and every 90 minutes during off-peak times in between.

.@rta_dubai launches a ferry service to commute passengers between Al Ghubaiba Marine Station in #Dubai and Aquarium Marine Station in Sharjah. It marks the first marine transit service operated between Dubai and any other emirate. https://t.co/vBKOzwI1tj pic.twitter.com/wFwr4vt8TG

From Dubai, the first ferry will depart every day at 5.15 am, with the last journey leaving Al Ghubaiba Marine Station at 8pm. From Sharjah, the first journey will be at 5am and the last one will depart at 7.30pm.

Tickets for the ferry between Dubai and Sharjah will be priced at Dhs15 for silver class and Dhs25 for gold class. Tickets are free for people of determination and and children under the age of five. Free Wi-Fi will be available on board for all passengers. 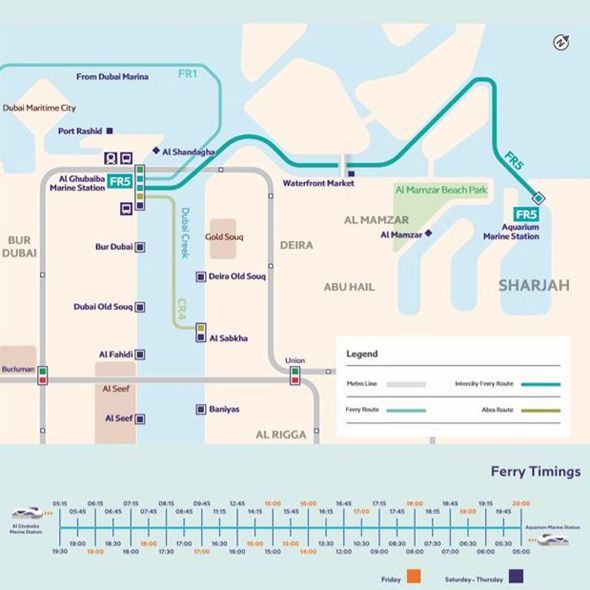 The new ferry service is the first marine transit service operated between Dubai and any other emirate, and will have capacity to serve up to 1.3 million passengers per year.

The launch of the Dubai to Sharjah ferry comes just days after Dubai’s Roads and Transport Authority (RTA) opened the new Tripoli Street Improvement project, in a bid to further improve travel between the two emirates.

The Tripoli Street Improvement Project aims to enhance Dubai’s traffic system by improving the link between Dubai and Sharjah, bettering the flow of traffic and making access easier to Al Warqaa and Mirdif districts.

As part of the project, the RTA has constructed collector roads, two underpasses, widening Tripoli Street at various point, a three-lane bridge to serve the traffic inbound from Tripoli Street to Emirates Road in the direction of Sharjah, as well as improvement works to various roundabouts and intersections.