One of the worlds most accoladed restaurant chains, L’Atelier de Joël Robuchon, is opening its doors in Dubai.

The famed restaurant by the late Joël Robuchon will open in DIFC next year in The Exchange building, just behind newly opened Shanghai Me. 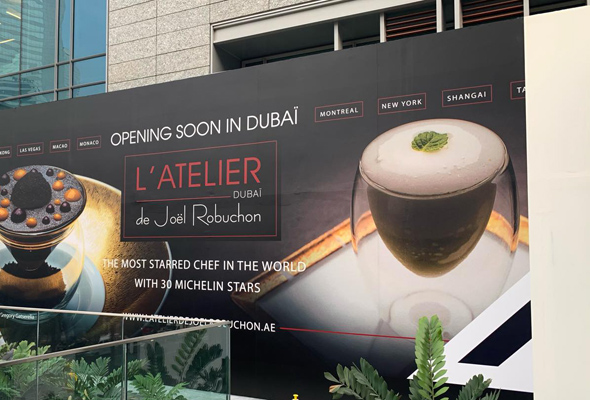 If you’re unfamiliar with the acclaimed restaurant, it’s recognised around the world for serving the celebrated chef and restauranteur’s signature high-end French cuisine.

Typically, the restaurants boast striking black and red decor, so we can imagine something similar of the Dubai outpost, which is being designed by Gatserelia Design.

Although we’re not sure when the restaurant will open, it looks as though work has only just begun on the concept in DIFC, so we imagine it’ll be a few months before we’ll be sampling the fancy French cuisine.

Across the Joël Robuchon portfolio, restaurants have a total of 30 Michelin stars, the most of any chef in the world. So, we’ve got high expectations for the Dubai outpost.

Although the celebrated chef passed away in August 2018, his restaurant empire continues to grow, with L’Atelier de Joël Robuchon Miami the most recent opening.

DIFC is really turning into the city’s foodie capital. This year, we’ve already seen arrivals of international hotspots like Indochine and Marea from New York, Amazonico from Madrid and homegrown Asian concept, Shanghai Me.