Eat & Drink
Reviews
Things to do

Steaking its claim as the city’s best meatery…

Chips on the table, we love a good steakhouse. And, we realise that in an age observing the proliferation of plant food, this may be an increasingly unpopular position, rare you might say, but we stand by it. A good steak, is a meal well done.

The capital already has a roaring trade in top-drawer beef-eateries, but it’s also a city that prides itself on a constantly evolving culinary scene. And at the sharp end of that knife, is the new multi-billion Yas Bay development.

We’ve returned to the Waterfront there to sink our teeth into the carnivorous feast supplied by Australian steakhouse, Hunter and Barrel. And to borrow an appropriate idiom from the land down-under, we’re fully stoked about seeing if the brand is able to repeat the same hype fire that the Dubai location lit. 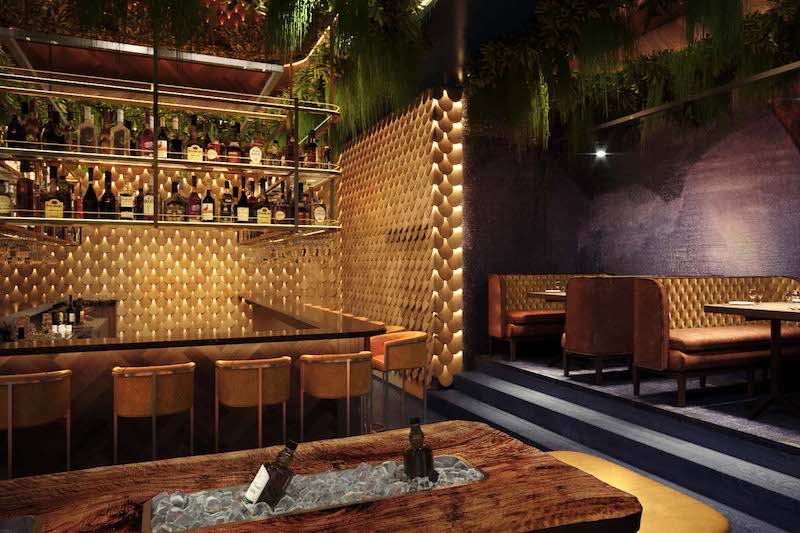 It’s an undeniably handsome, if deliberately eclectic, venue. We’re seated inside with an inverted landscape mural in sepia to our rear, Tulum rave-style neon macrame lampshades above our heads and a brass art-deco bar just out of eyeshot. The plant-hemmed terrace is an extremely pleasant spot too, but we can see the sea from our cosy indoor nook, so that’ll do for us.

Throw another shrimp on the barbie 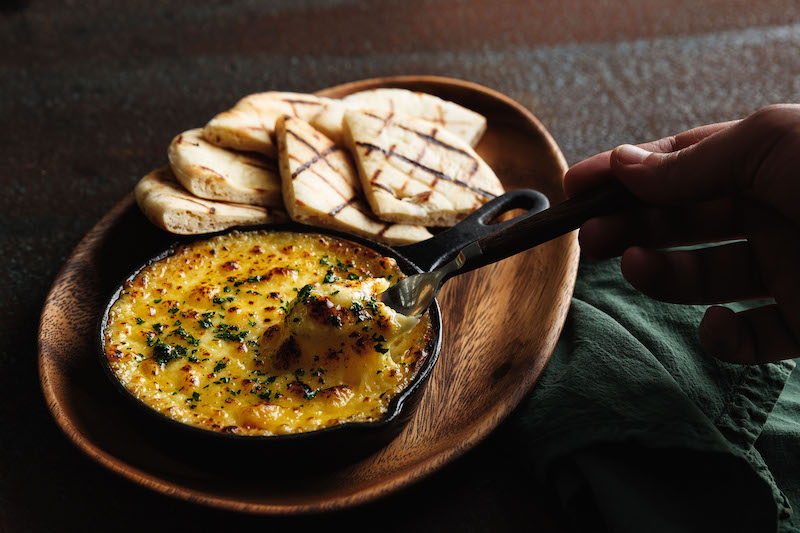 It’s the steak that opens the batting order here of course, and we’re determined to (Aussie slang disclaimer) give that a fair suck of the sauce bottle, but we’re also dining with somebody that doesn’t eat beef, a designated alt-meat degustationist, to test out the restaurant’s steak-free offerings.

The meal begins with rustic bread, served with a quietly show-stopping chili butter. Appetites suitably whetted, the Hunter’s sharing platter we commissioned appears on the table. On it are ‘open fire prawns’, smoky chicken wings, a three cheese dip and spicy calamari.

It’s a library shuffle of awesome flavour, but the molten cheese dip hits the strongest six. There’s a certain brazen frivolity in having fondue as an appetiser, but like the plating method for this platter we’re *flips scarf over shoulder* on board.

As you’d expect from a steakhouse, there’s a bonza-nza of prime cut options and accompaniments to choose from, we’ve selected the 1.3kg tomahawk (Dhs500, good for two), with chunky chips, salad and a chimichurri sauce. The steak is carved theatrically tableside and as the slices line up, it’s clearly marbled in all the right places. 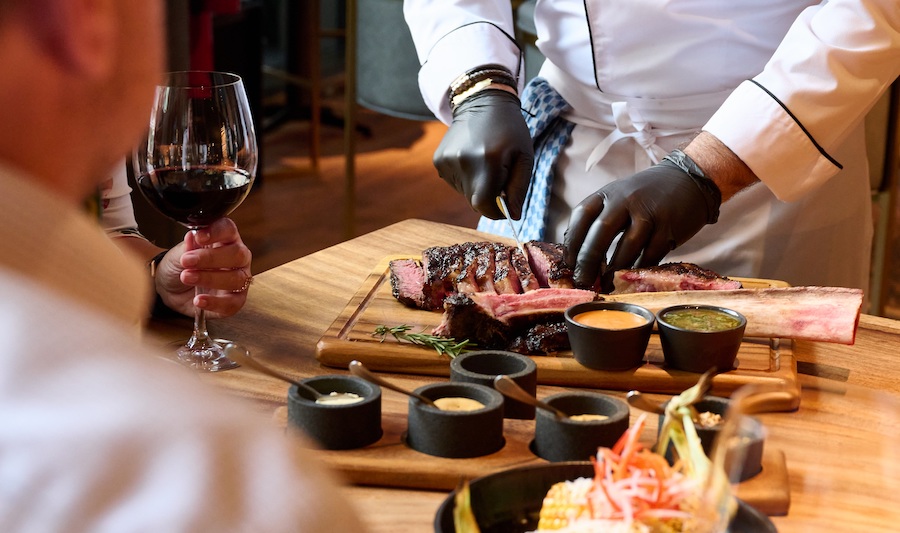 We’ve been equipped with serrated steak knives, but you could probably make a decent dent in the meat with a dessert spoon. It’s butter-soft, even seared just shy of a medium, and is lightly glazed with faint nudges of a bush-prep marinade. This is good grain-fed steak, honestly priced, and we’d back it to punch holes in the established Abu Dhabi steakhouse hierarchy.

Other meaty table treats on our live to-do list include coal-roasted skewers, chicken thigh (Dhs75) and wild salmon (Dhs110) that arrive hanging pendulously from a suspended hook. We’ve even ordered a five-grain vegan-friendly kebab (Dhs65). Balance. The portions are star-spangled banner size, and even with a spirited final assault, we are unable to clear the ranks. One criticism, and we’re not sure if it’s the meat-dizzies talking, but the vegan kebab does feel a little dry and beige in taste. The chicken skewer however, a clear winner for ‘best non beef dish’ — a scandalously juicy affair, full of rendered, herby charm.

Verdict: Hunter and Barrel is very strong addition to the Abu Dhabi steakhouse scene, and it finesses well beyond the beef section of its menu. The only problem it presents, is now it’s even harder to chose somewhere to eat at Yas Bay. Rating: A-

Eat & Drink
Reviews
Things to do
EDITOR’S PICKS
Here's the full list of UAE public holidays in 2023
READ MORE
23 incredible things to look forward to in the UAE in 2023
READ MORE
Hidden gems: 10 UAE desert pop-ups to discover this winter
READ MORE
Where to travel in 2023: 10 new flight routes from the UAE
READ MORE
MOST POPULAR
Pics of the week: Your best photos of the UAE
Dhow & Anchor has got you covered every day of the week
RTA: All the road closures you need to be aware about
Review: The Nice Guy Dubai
Masha and the Bear is coming to Abu Dhabi this April
YOU SHOULD CHECK OUT
Our website uses cookies and other similar technologies to improve our site and your online experience. By continuing to use our website you consent to cookies being used. Read our privacy policy here.