Saadiyat Island could easily get by on looks alone. With its rugged sun-bleached beaches, turquoise surf, dolphin and turtle inhabitants and a vibrant gastronaut quarter, it’s a very easy place to fall in love with at first sight. But its beauty goes deeper than that. The ongoing Saadiyat Cultural District project is curating a network of museums, galleries and heritage sites every bit as noteworthy as the priceless collections contained within them. Places of learning, places of appreciation and awe, places that honour the past and celebrate the future.

Once finished, Saadiyat Cultural District will be one of the most densely packed, globally-relevant cultural centres in the world. If you’re curious about what’s coming soon, these are all the confirmed constructions currently underway. 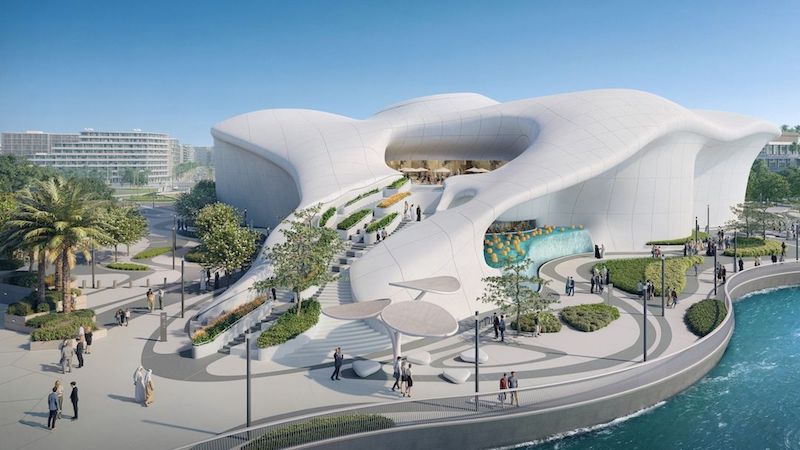 Set for completion in 2024, Phenomena is a collaborative effort between DCT Abu Dhabi, Miral and teamLab — and the result, as you can see from the renders, looks set to be an engineering masterpiece. The architectural marvel represented by the building is more than skin deep. The futuristic looking space will stretch across a 17,000 sqm gallery area and is billed to become the ‘home of infinite curiosity’. But what does that actually mean? It’s a pretty cool concept, the collections within will be curated around a theme of ‘environmental phenomena’ and ‘offering new perspectives on the world’. The true genius here though is that the exhibits will be shaped by the changing environment, and like their organic inspiration, grow and evolve mimicing the subject matter. Each piece will be designed to respond to its specific local environment within the teamLab Phenomena building, and the interactions it encounters. This constantly changing virtual world means that every visit, by every guest will yield a different experience.

Once completed, the Zayed National Museum will represent nothing less than an architectural marvel, a fitting home for the inspiring story of our nation and its visionary founder. Located on Saadiyat Island, already the seat of so much cultural import, the breathtaking structure designed by Foster + Partners will include a 123-metre-high tower. The main gallery will be devoted to a collection of artifacts illuminating aspects of Sheikh Zayed bin Sultan Al Nahyan — the man, and his leadership journey the country’s unification, and beyond. There will also be gallery space devoted to exhibitions on Falconry and Conservation; Land and Water; History and Society; Science and Learning; Faith and Islam; and it will host the grand Sheikh Zayed Library. Although we don’t have a projected completion date, work on the building began back in 2019. 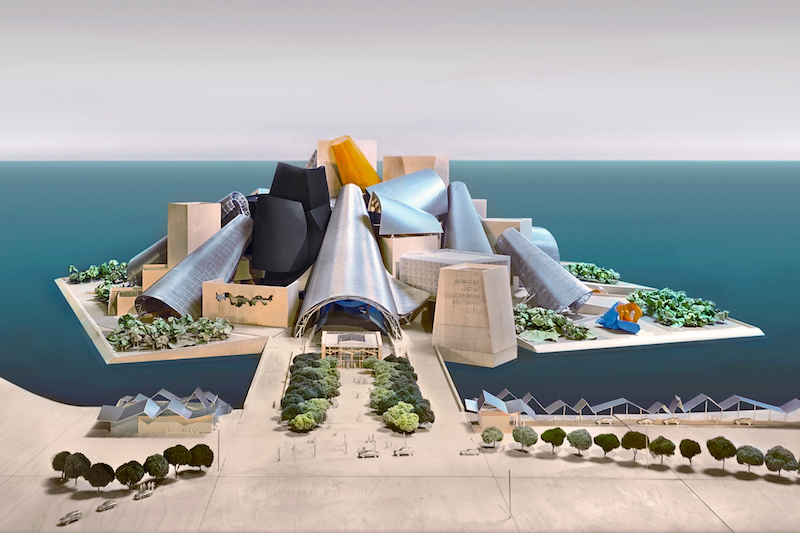 On track for completion in 2025, the Frank Gehry designed Guggenheim Museum will add a jagged smear of swoon to the Saadiyat Cultural District skyline. True to the spirit of Guggenheim (and conceived in collaboration with Solomon R. Guggenheim Foundation), the plans for the building — cut a contemporary, unconventional, but singularly beautiful design. As outside, so within. Inside you’ll find 28 galleries across a 11,600 sqm expanse, there’s also an additional 23,000 sqm of exhibition spaces contained within the distinctive cones and terraces attached to the building. Guggenheim Abu Dhabi will exhibit a collection of modern and contemporary art with a special focus on pieces from the West Asia, North Africa, and South Asia (WANASA) region. The museum has been tasked with providing a platform for artists from the WANASA area, commissioning works from artists at the spear’s tip of creative innovation, and illuminating how “the interconnected histories and cultures” have helped shape our world. Speaking about the project, H.E. Mohamed Khalifa Al Mubarak, Chairman of DCT Abu Dhabi said: “The museum will also play a civic role through its mission to spark wider interest in global modern and contemporary art, fostering diversity and inclusion in a meaningful cultural exchange. As we move forward with our plans, it is crucial to recognise the impact of this museum in realising our vision for the Emirate’s culture and creative industries.” 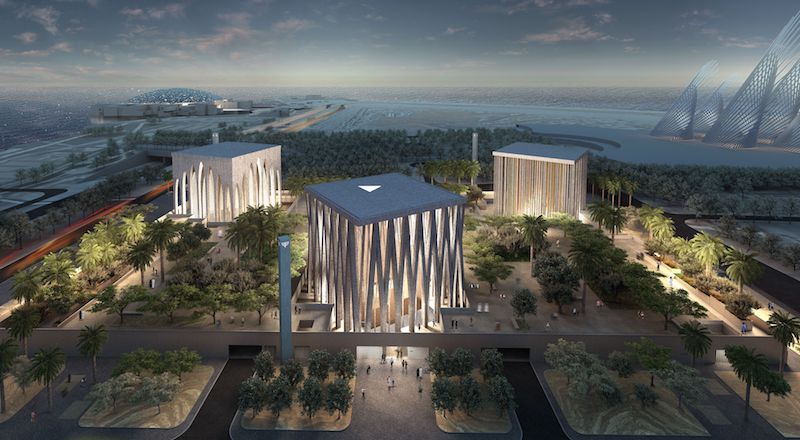 Situated on Saadiyat Island, the Abrahamic Family House is a mega project with an incredibly inspiring message. Inspired by the Document on Human Fraternity, supervised by the Higher Committee of Human Fraternity, and ‘followed closely by Pope Francis and the Grand Imam’ — the Abrahamic Family House will comprise a mosque, a church, and a synagogue within the same space.  The building was designed by architect Sir David Adjaye, to capture ‘the values shared between Judaism, Christianity, and Islam’. The endeavour was first announced back in 2019, by H.H. Sheikh Abdullah bin Zayed Al Nahyan, UAE Minister of Foreign Affairs and International Cooperation, but this latest update has given us the names of the worship centres. Within Abrahamic Family House you will find Imam Al-Tayeb Mosque, St. Francis Church, and Moses Ben Maimon Synagogue. The aim is that this project will symbolise and inspire tolerance, togetherness, fraternity, mutual respect and peaceful coexistence. 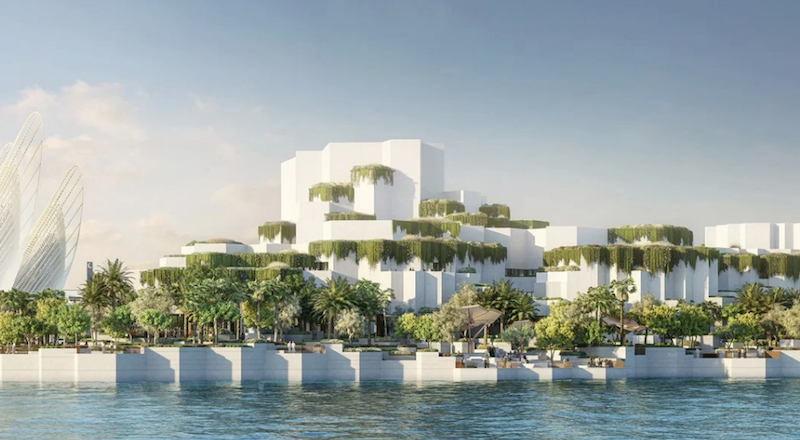 One of the biggest bits of cultural news so far this year, is the DCT’s confirmation that Abu Dhabi is getting a Natural History Museum. This will be the fourth museum of the Saadiyat Cultural District (after Louvre Abu Dhabi, Zayed National Museum, and the Guggenheim), and is due to open its doors on Saadiyat Island in 2025. In addition to engaging exhibits curated to illuminate the universe’s 13.8 billion years of origin story, the site will also include a scientific research centre ‘that will undertake studies in zoology, palaeontology, marine biology, molecular research and earth sciences’. The project was announced by Khaled bin Mohamed bin Zayed, and promises to ‘help find solutions for the future of our planet.’ We also have context confirmation on two of the flagship objets d’awe — Stan, a 67 million year old tyrannosaurus rex skeleton; and the seven billion year-old Murchison Meteorite (both of these specimens will be available to see at a special Manarat Al Saadiyat preview exhibition between April 6 and May 12 this year).

Even more to Louvre 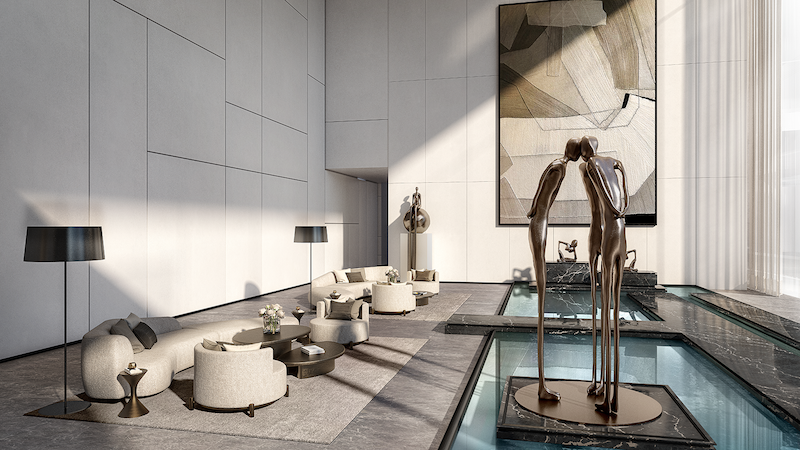 Louvre Abu Dhabi represents the cultural epicentre of the emirate, but after a truly astounding piece of news announced by local master developers, Aldar — it might soon represent the epicentre of your living room too. Once complete, the Louvre Abu Dhabi Residences by Aldar will be a residential complex of 400 apartments, with an iconic address, stunning ocean views and next-door-neighbour-status to one of the world’s most impressive collections of art and historical artefacts. Included within the structure will be Le Salon Détente — a lounge for residents that will feature art curated in consultation with the experts at Louvre Abu Dhabi; a 12-seater Cinema Privé for private theatre experience; a wellness centre – Spa Bien-être which will of course feature a gym, sauna rooms, spaces for yoga and meditation; and there will also be an indoor kids’ playroom,  called, appropriately, the Creativité Room. It’s all part of Saadiyat Grove, a 242,000 square metre, Dhs10 billion development which will also include retail and entertainment attractions, other residential properties, two news hotels and co-working spaces.

Culture
Things to do
EDITOR’S PICKS
Here's the full list of UAE public holidays in 2023
READ MORE
23 incredible things to look forward to in the UAE in 2023
READ MORE
Hidden gems: 10 UAE desert pop-ups to discover this winter
READ MORE
Where to travel in 2023: 10 new flight routes from the UAE
READ MORE
MOST POPULAR
With its unique decor, Dubai's La Nina restaurant evokes tales of distant travels
Reservations are now open for French restaurant Fouquet's Dubai
The colourful Sharjah Light Festival returns next week
Relive those cosy winter moments at Chalet 105 at Twiggy
There are some big road closures in Abu Dhabi this weekend
YOU SHOULD CHECK OUT
Our website uses cookies and other similar technologies to improve our site and your online experience. By continuing to use our website you consent to cookies being used. Read our privacy policy here.