10 wonderful things to do in Abu Dhabi this weekend: Dec 9 to 11

What a wonderful world…

With the football World Cup approaching the end game now, the festive season tapping it politely on the shoulder asking if it can come through and some stunning alfresco merry-making weather prevailing — your Abu Dhabi weekend is looking pretty tasty.

Just going out for a Cup-ple

We’re into the quarter final weekend of the World Cup and there are some huge matches taking place this weekend: On Friday, Croatia take on Brazil at 7pm, with Netherlands going head-to-head with Argentina at 11pm. Saturday’s 7pm game is Morocco vs Portugal and at 11pm it’s France vs England. Is it coming home? On vera. But where to watch it all? At Al Raha Beach you’ll find big screens showing every kick, header, save and speculative half-line volley with both indoor and alfresco seating to make the most of the UAE’s great outdoor season. In addition to a solid team sheet of beer and beverage options, the fan village at Al Raha Beach Hotel will include a series of food stalls, adding to the festival atmosphere. Here you and the squad can choose to support sport snack MVPs such as hot dogs, sliders, tacos and of course — local casual cuisine G.O.A.T, the shawarma. Entry is completely free, and to streamline the food and beverage service, a coupon system will be in place.

Evening brunch, but make it classy. That’s the unofficial mantra for Filini Garden’s supper club held every Friday from 5pm. This sundowner session offers three hour packages of free-flow signature bites and drinks (Dhs169 for soft, and just Dhs269 for house) set to an Italian soundtrack with saxophonist, Arat.

The grand ‘Palace of the Nation’, Qasr Al Watan lies at one end of the city’s main Corniche, caught between the unyielding blues of the Arabian Gulf and the chasm of skyscrapers that define the city’s skyline. It is by all measures a newcomer on the UAE’s heritage scene, having opened its ornate doors to the public in 2019, but it already commands a place amonst its most precious cultural gems. Entry to the attractions is just Dhs6o and contained within its white granite walls, you’ll find a blend of educational and inspirational experiences — architectural masterwork; a library with storey-high book shelves; the great hall; the seat of the UAE’s cabinet; a ‘house of knowledge’ learning hub; exhbits telling the story of the nation’s rich and nuanced history. There’s also a Palace in Motion Sound and Light show (adults Dhs25, kids Dhs12), which now takes place daily. An entertainment extravaganza that illuminates tales from the nation’s past, present and future.

Taking place every Friday and Saturday until March 18, 2023 between the hours of 4pm and 11pm, The Park Market is a little piece of fresh air retail reverie. You’ll find such ‘you never knew you wanted’ items as candles, clothes, accessories, antiques, jewelry, cosmetics, perfume, and organic produce. There are also fun activities for kids — flying kites, getting messy with bubbles and slime, there are educational arts, painting ops, skill games, magic shows, clown shows, storytelling sessions, and music performances. To keep the whole family entertained the park will be hosting magic shows, clown shows, storytelling sessions, music shows and much more. This weekend there’s also the exciting prospect of the annual Thai Festival, showcasing the best culture, cuisine and colour of the South East Asian land of smiles. say a big sawadee kha to Muaythai demonstrations, Thai cooking masterclasses, fashion shows, concerts and more.

Mushrif area, Fri and Sat 4pm to 11pm entry to the park is charged at Dhs10 per person.ummalemaratpark.ae

Lock, Stock & Barrell may not have invented the party brunch, but they might just have perfected it. Priced at just Dhs250 for the house package, their famous high energy, epic-bites (we’re talking here about chicken tacos, lock and loaded nachos and truffle mac n cheese croquettes), wild-entertainment crammed brunch just got a live musical upgrade. All the fun of before, with the added benefit of show-stopping, on-tour UAE-based rock and pop talent, hitting the stage primed to drop the mic and crank up the fiesta brunch vibes.

Did you know that Bodytree Studio now offers their calming contemplation sessions at Louvre Abu Dhabi three days a week. These sessions are priced at just Dhs105 and are a mere cobra stretch away from a culturally immersive stroll around one of the world’s finest museums (access to the galleries is included in the price). The 75-minute yoga classes cover a variety of different yoga practices dependent on the day and time of your visit — but the weekend schedule includes Hatha Yoga (11am Sat), Sound Healing with Restorative Stretching (5pm on Sat), ladies only Hatha (11am Sun) and ladies only Pranayama & Meditation (5pm Sun).

Battle Park, a new ‘digital paintball’ experience is now open in Abu Dhabi’s Marina Mall and it looks like a clean bullseye for the Call of Duty generation. There are a few different ways you can play at Battle Park — gather the squad for iBattle, a team deathmatch spawned in an abandoned prison-themed layout, from Dhs75 for a 20 minute game. There’s also a virtual shooting simulator with sessions priced from Dhs40, and target shooting from Dhs50.

In addition to the eight themed zones; an XXL reticulated python known only as ‘Super Snake’; back stage tours; and marine animal rehabilitation projects, The National Aquarium also offers a range of marine life meet and greets. You can, for example, have an ‘Ocean Encounter’ feeding sharks measuring up to two metres in length for just Dhs180. And that price includes access to the ‘Aquarium Journey’. Want to take it to the next level? You can also now dive with the sharks, and experience their gentle shrapnel-toothed beauty up close. 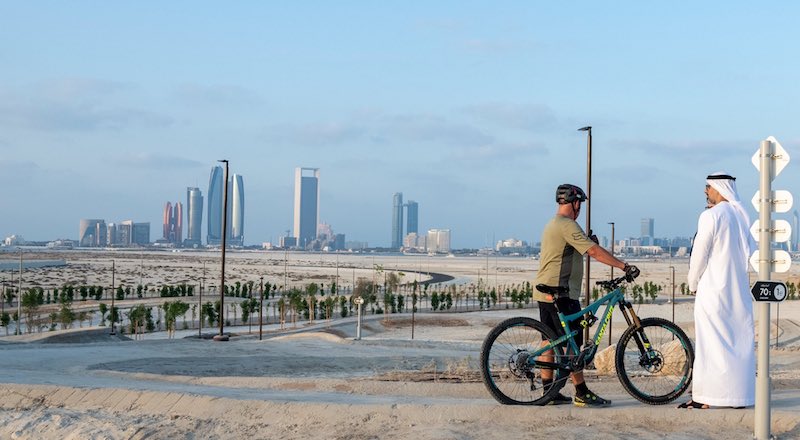 Back to the island

This James Bond-style island is the seat of one the most luxurious resorts in Abu Dhabi, but you can score a license to chill there (a day pass) for Dhs750. This includes pool and beach access, your return ferry crossing, and Dhs550 back to spend on dining, drink, watersports and spa activities. There are some great restaurant options available too — there’s the seafood restaurant Hooked, Smokin’ Pineapple (which has its own surf pool) and Frangipani — the home of the hotel’s Saturday brunch. Nurai’s spa offers premium pamper opportunities, the latest trending treatments and relaxation as standard. Need to occupy the little ones too? There’s a nautical tonne of activities for kids including waterpark and flume adventures, shell painting and a packed fun-tineray at the dedicated Petit Z club.

Nurai Island, is a 15 minute boat ride from the Welcome Centre on the east side of Saadiyat Island, near exit 14 of Sheikh Khalifa Bin Zayed Al Nahyan Highway, guests should arrive at least one hour before session start time. Book your space now, by calling (02) 506 6229, nuraiisland.com

Culture
Eat & Drink
Family
Nightlife
Things to do
EDITOR’S PICKS
Here's the full list of UAE public holidays in 2023
READ MORE
23 incredible things to look forward to in the UAE in 2023
READ MORE
Hidden gems: 10 UAE desert pop-ups to discover this winter
READ MORE
Where to travel in 2023: 10 new flight routes from the UAE
READ MORE
MOST POPULAR
Celebrate love with this Beach Resort's floating breakfast above the clouds
How Dubai is becoming a hub for wellness (and where to search for serenity)
Don't forget, Shrek the Musical is taking place at Dubai Opera this month
29 Sheikh Hamdan-approved restaurants in Dubai
Watch a movie under the stars at Expo City Dubai
YOU SHOULD CHECK OUT
Our website uses cookies and other similar technologies to improve our site and your online experience. By continuing to use our website you consent to cookies being used. Read our privacy policy here.