Check out the new entertainment venue at this ultra luxe hotel

Sponsored: Catch the beautiful game from a beautiful venue at Palazzo Versace Dubai…

There’s a newly opened alfresco fan zone at Al Jaddaf’s palatial waterfront address. ARENA by Palazzo Versace is a stunning outdoor space with tempting food and drinks offers as well as a fantastic lineup of entertainment during the matches, incredible dinner shows, the chance to spot celebs and more.

Experience a fan zone like never before with an exciting lineup of theatrical entertainment that will leave you wanting more. Guests can enjoy a wide variety of a la carte food offerings that creates the typical stadium atmosphere such as pretzels, chicken wings, ribs and more. Fans will also be able to take advantage of wine and beer packages as well as special combo deals.

With extravagant dance shows throughout the World Cup featuring acts based on Roman and Greek mythological characters and a ceremonial Roman parade featuring Medusa, this is one you won’t want to miss. There will even be a giant disco ball and dance shows featuring flags of all the participating countries. 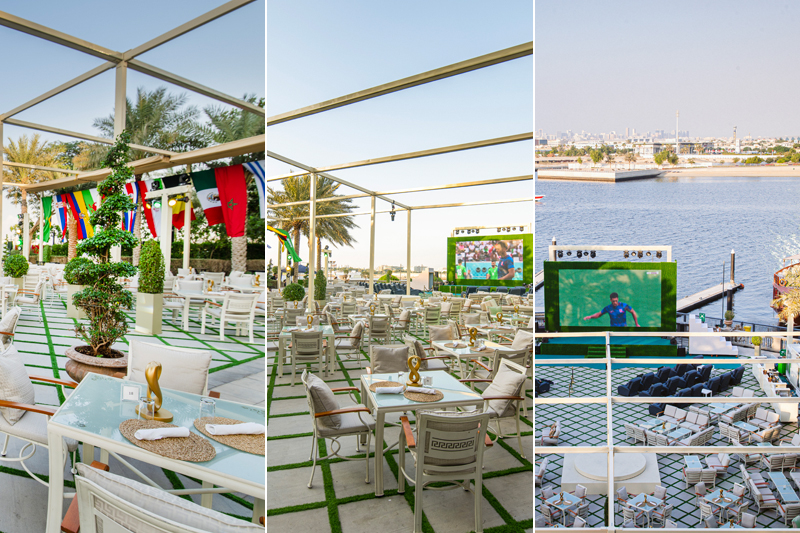 Every match day, guests can expect a range of interesting and fun acts, including awe-inspiring freestyle footballers, live music and roller skaters. ARENA by Palazzo Versace Dubai will screen every game on a huge state-of-the-art outdoor screen, with an electric atmosphere while you sit back on the loungers and recliners for ultimate comfort.

Partner Content
World Cup
EDITOR’S PICKS
Here's the full list of UAE public holidays in 2023
READ MORE
23 incredible things to look forward to in the UAE in 2023
READ MORE
Hidden gems: 10 UAE desert pop-ups to discover this winter
READ MORE
Where to travel in 2023: 10 new flight routes from the UAE
READ MORE
MOST POPULAR
W Abu Dhabi will host a second edition of its sustainable Looped In menu
The UAE law changes on marriage, divorce and child custody to know about from February 1
5 fabulous new Dubai hotels to check-in to
Pics of the week: Your best photos of the UAE
Dhow & Anchor has got you covered every day of the week
YOU SHOULD CHECK OUT
Our website uses cookies and other similar technologies to improve our site and your online experience. By continuing to use our website you consent to cookies being used. Read our privacy policy here.