Behind the scenes at Dubai Park and Resorts construction site

What’s On was treated to a hard hat tour of the new Dubai Park and Resorts in Jebel Ali, as those behind the project showed off exactly what the first mega theme park in Dubai will truly look like.

Scheduled for completion in 2016, the Dhs10 billion leisure and entertainment district will feature three themed areas in its first phase, including LEGOLAND, Motion Gate and Bollywood Parks Dubai.

**CHECK OUT OUR GALLERY ABOVE BY CLICKING THE ARROWS**

The tour coincided with an announcement by Meraas Holding that 35 per cent of the infrastructure had already been completed, as well as more than half of the construction contracts have been procured.

Those behind the project also revealed that a workforce of over 2,500 are working across an area of approximately 16 million square feet (with an additional nine million of access roads and parking). That number is expected to almost treble within the year.

In terms of rides and attractions, Dubai Parks and Resorts revealed they have ordered upwards of 80 percent of the 42 theme park rides… but crucially they refused to reveal the specifics.

**SEE WHAT THE PARK WILL LOOK LIKE WHEN IT’S COMPLETED**

Paul La France, chief projects officer at Dubai Parks and Resorts, said: “We have a great team that is overseeing the progress of this project and made significant headway in all construction areas. Dubai Parks and Resorts is one of the most anticipated developments in the region with a unique product offering.

“With the procurement of the majority of the planned rides in place, we have entered a new phase of development. Following a stringent bidding process, we have chosen some of the world’s leading players in the entertainment rides industry. Several of the attractions are world-firsts in terms of integrating best-in-class technology and expertise.”

LEGOLAND is being operated by Merlin, a leader in the field in Europe, and will be the seventh park of its kind around the world. The group are also responsible for the likes of SeaLife, Madame Tussauds, The London Eye, Gardaland, Alton Towers, Thorpe Park, Blackpool Tower, Wild Life Sydney Zoo, Sydney Tower Eye and Skywalk. 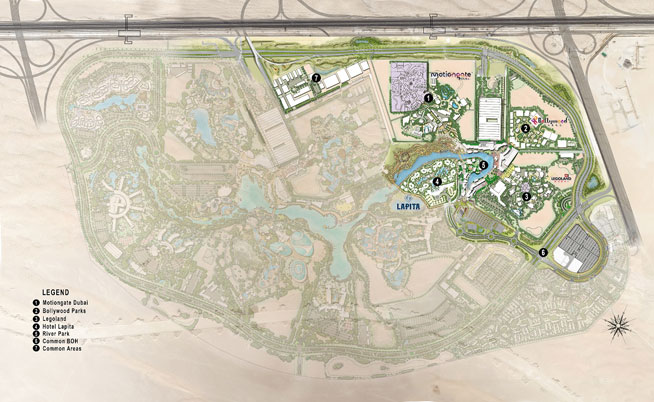 Pictures by Ajith Narendra and Meraas

News
Outdoor
Sport & Fitness
EDITOR’S PICKS
Here's the full list of UAE public holidays in 2023
READ MORE
23 incredible things to look forward to in the UAE in 2023
READ MORE
Hidden gems: 10 UAE desert pop-ups to discover this winter
READ MORE
Where to travel in 2023: 10 new flight routes from the UAE
READ MORE
MOST POPULAR
The best new breakfast spots to try in Dubai
Inject some culture into February with 14 cool exhibitions in Dubai
Plans unveiled for a scenic new 93km cycle highway in Dubai
A free full moon beach party is happening in Dubai this weekend
42 parks with outdoor barbecue facilities in Abu Dhabi
YOU SHOULD CHECK OUT
Our website uses cookies and other similar technologies to improve our site and your online experience. By continuing to use our website you consent to cookies being used. Read our privacy policy here.