While 78 per cent of Dubai’s teens claim to be happy, there are still some problems…

According to a new government survey, 34 per cent of Dubai students aged 12 to 16 felt “so sad and hopeless in school that they stopped doing their usual activities.

A pretty hefty thirty-five per cent of these students felt as if they weren’t well-rested going to school, while 47 per cent of them claim that they ate fruit and veg less than twice a week at school.

More…
– Quality of living in Dubai – How it ranks against the rest of the world
– Is Dubai really an expensive place to live?

Relationships at school also seemed to be a problem for them, with 59 per cent of the teens and tweens believing that at some point in the past 12 months they were the subject of gossip and rumours.

Here are some of the results:

THE RESULTS FOR THE YOUNGER STUDENTS

Eighty-one per cent of elementary school students felt their teachers care about them and give them praise for good work, with 87 per cent of them feeling that teachers and other students make it clear that bullying is unacceptable.

Here are some more of the younger group’s results… 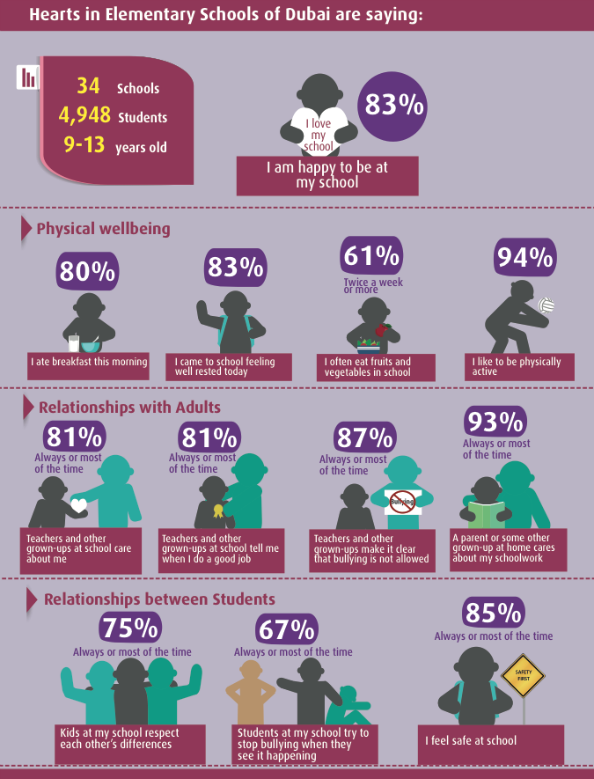 This is the first time the Survey of Hearts has been conducted, and with a successful yield of participants and the fact it gives great insights into how to help the UAE’s young residents, it’s unlikely it’ll be the last.

Now that the results are in, Hind Al Mualla, Chief of Creativity and Happiness and Innovation at KHDA mentioned that workshops will be held with the schools who took part to talk about how to design an action plan to help students overcome their problems.