VIDEO: The turtle sanctuary inside the Burj Al Arab

What’s On gets a sneak peak at the Dubai Turtle Rehabilitation Project inside the luxurious Burj Al Arab.

Everybody loves turtles, that’s just a given. But did you know that Dubai’s glamorous Burj Al Arab hotel has a turtle rehabilitation centre inside it?

The Dubai Turtle Rehabilitation Project (DTRP) has been caring for injured and sick turtles for more than ten years now and today, to celebrate World Sea Turtle Day, they’ve released more than 100 happy and healthy turtles back into the ocean.

Here’s a video sneak peek at the sanctuary and its patients in a half shell:

Once the DTRP has nursed the turtles back to health in the intensive care units and quarantine tanks in the Burj Al Arab aquarium, they’re sent to rest up in the pools in Jumeirah Mina A’Salam – you’ll have spotted them from Tortuga (the Mexican restaurant).

If that wasn’t luxurious enough, the friendly reptiles are due a further upgrade after summer when they’ll be moved into their specially-designed turtle lagoon in Jumeirah Al Naseem (that’s the new hotel under construction next to the Madinat Jumeirah). 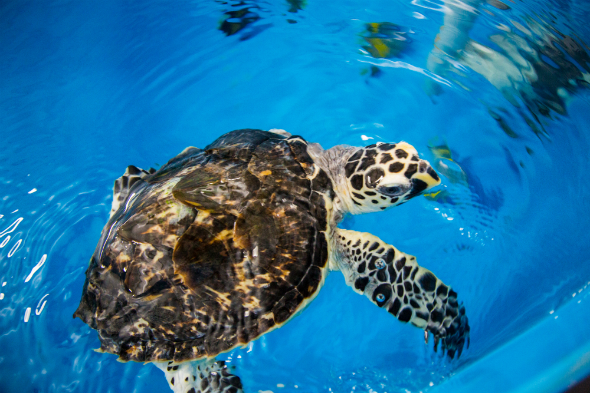 “Compared to our existing pools in Mina A’Salam, these are about five times the size,” said Warren Baverstock, the Burj Al Arab’s aquarium Operations Manager of the new lagoon. “It’s been designed in such a way that this massive area can be divided into five sections, which will allow us more intensive care of the individual species.”

Most of the turtles being cared for by the DTRP are hawksbills, green turtles and loggerheads. They come in with all sorts of issues, including incrustation of barnacles, entanglement of fishing line, ingestion of foreign matter such as plastic bags and impact by boats. 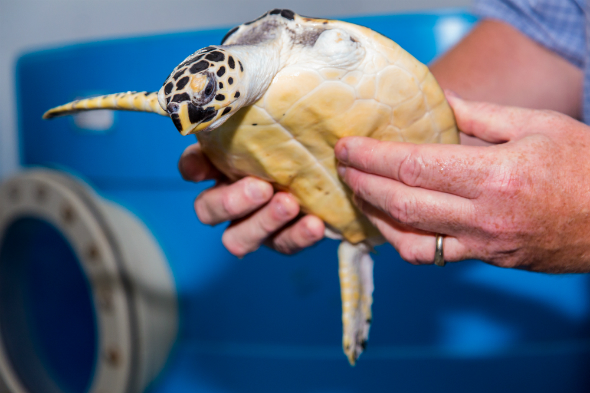 THE INJURIES THEY SUFFER

One loggerhead turtle we met, who was about 30-years old, had been brought in with a huge deep crack along her shell (or carapace). They suspect the impact trauma was caused by a boat or jet ski and that she’d been that way for about a week.

So they had to act quickly, essentially stitching her shell back together with stainless steel wire to help the bone refuse – fortunately she’s doing well and they plan to release her into the new turtle lagoon once she’s ready. 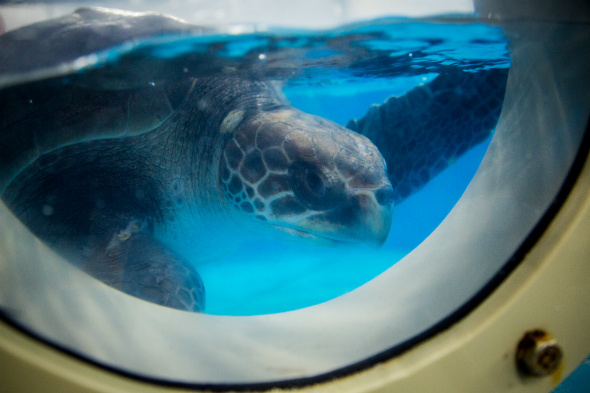 The DTRP has received more than 300 turtles this year alone, but where do these turtles come from?

Most of the patients are brought in by members of the public who find them washed up on shore.

WHAT TO DO IF YOU FIND A TURTLE

So if you ever come across a turtle in need, follow this advice from Operations Manager Warren…

Find out more at dubaiturtles.com

Culture
News
EDITOR’S PICKS
13 Sheikh Hamdan-approved restaurants in Dubai
READ MORE
Dubai brunches temporarily banned in new preventative measures
READ MORE
12 upcoming Dubai mega-projects we can't wait for
READ MORE
16 of the best beach bars in Dubai for sundowners
READ MORE
MOST POPULAR
St Patrick's Day 2021: The best deals and celebrations in Dubai
Dubai Police add a new supercar to their fleet
Run even faster with Under Armour's groundbreaking new trainers
Dubai Culture to grant 1,000 long-term cultural visas
This Abu Dhabi island brunch offers an amazing family friendly escape
YOU SHOULD CHECK OUT
Our website uses cookies and other similar technologies to improve our site and your online experience. By continuing to use our website you consent to cookies being used. Read our privacy policy here.