News
Theatre
Things to do

Hosted as part of the Abu Dhabi Summer Season, What’s On got to speak to Cirque Adrenaline’s resident strongman Mark Flores about training, safety wires and nerves ahead of his performance today at Al Raha Beach Theatre. 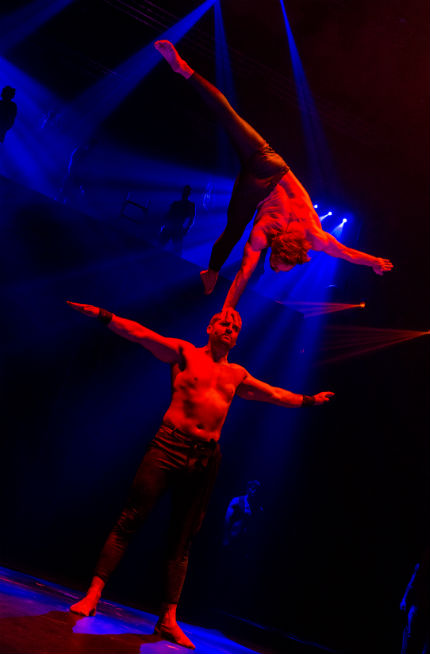 Tell us more about your act?

Basically it is a duo act [Flores and Carl Ganley], and we do certain poses and acrobatic tricks using each other to balance on. I’m always the guy up on top, upside down and my partner is they guy who stops me from ending up on the floor. We finish the act by climbing up a ladder with me balancing on one hand on his head.

What is your training schedule like at the gym?

I go to the gym but I don’t train with weights. My training is more directed to repetition to what I do when I perform. I do cardio and a lot of my own body weight training. I’ve got my own very specific programme of what I do so it’ll be things like handstands, resistance training and jump-based exercises.

Why don’t you perform with safety wires?

It’s restrictive. Some of the acts don’t lend themselves to having safety wires attached and the other thing is if someone is coming to see a show called Adrenaline they prefer to looking it raw, frightening and dangerous. It’s a bit of both.

Do you ever get nervous?

There’s definitely a certain amount of apprehension and respect for what we do. Nobody goes out their without thinking about that. The stunts are dangerous and can result in not-so-good things if you are not concentrating. There’s a healthy respect more than nervousness.

What has been your worst injury?

I don’t like talking about injuries! Thank God I’ve been lucky I haven’t been critically injured but that also comes down to a lot to do with our preparation. There’s always the opportunity for injury – we just have to prepare around it.

What is the hardest stunt for you?

Physically is probably the Strongman solo act, but mentally it’s the act when there are more than a couple of people on stage. As soon as you involve more than one other person then it’s the coordination, concentration, always remembering your cues – it is split second timing at some points.

What can the audience expect from the show?

Expect to be wowed. It’s a very raw, entertaining spectacle. If you’re not on the edge of your seats then I would be surprised.

News
Theatre
Things to do
EDITOR’S PICKS
UAE holiday dates announced for Eid Al Adha
READ MORE
Emirates extends suspension of flights from India to UAE again
READ MORE
Coming soon: Everything we know about Ain Dubai so far
READ MORE
Khorfakkan set to open new tourist attraction 580 metres above sea level
READ MORE
MOST POPULAR
It's Dhs350 to brunch, stay and play at the What's On Lock In this weekend
UAE weather: Temps of over 50ºC recorded in the shade yesterday
Get a free Expo 2020 day pass when you fly with Emirates
A popular fairy-tale is gracing the stage at The Theatre at Mall of the Emirates in August
UAE petrol prices will increase again in August 2021
Exclusive interview: John Cena on his role as a 'douchey Captain America'
YOU SHOULD CHECK OUT
Our website uses cookies and other similar technologies to improve our site and your online experience. By continuing to use our website you consent to cookies being used. Read our privacy policy here.