News
Nightlife
Staycations
Things to do

It’s just been confirmed that we’re all getting a three-day weekend thanks to Islamic New Year, so how will you be spending your extra day off work?

Well, if you’re feeling a bit flush, we have an idea.

Nikki Beach might just take the title of the city’s plushest beach club, thanks to its pretty exclusive price tags.

The luxury beach club opened earlier this year (the Beach Resort and Spa will open soon too), and, when all completed, the entire resort will span an incredible 52,000 square metres (to put it into perspective, that’s around 10 per cent of the total retail area of Dubai Mall). 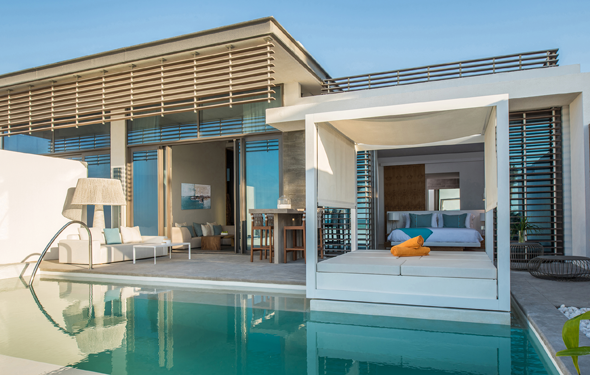 There’s 400 metres of private beach on the Pearl Jumeirah, 117 rooms and suites, and 15 villas, plus a spa, gym, restaurants and live-in residences.

So what bang do you get for your buck?

Well, if you want to make a proper day if it, round up five of your friends and book the ‘oversized day bed’ – a six-seater sofa that’ll cost you a Dhs1,500 minimum spend on a weekday. Want to do it on a weekend? That’ll be Dhs3,950 to sit in front of the pool, but you’ll also score a 750ml bottle of premium champagne with that. (The price varies hugely depending on the vintage, but the same sized bottle could cost around Dhs550 in the UK or the US).

If you want similar treatment for a smaller cost, you can also pay Dhs2,500 for an oversized day bed in the second row, and you’ll get two bottles of marginally cheaper bubbly included.

But you can go bigger. Much bigger.

Got more than five pals? Well, if you can gather a crowd of eight, you could get a temperature-controlled cabana that comes with a luxury bed and private dining table.

To compare, a 12-person party bed at Blue Marlin would set you back Dhs,4000.

If your budget doesn’t stretch, however, don’t fear (neither does ours). Individual sun loungers go for Dhs150 on a weekday and Dhs300 on the weekend, and that includes one soft drink and a towel.

It’s still pricier than many other beach clubs though – a lounger on a weekend at the also-five-star Nasimi Beach will set you Dhs250.
But hey, sometimes you just deserve to treat yo’self.

News
Nightlife
Staycations
Things to do
EDITOR’S PICKS
So, when is the next UAE public holiday in 2021?
READ MORE
All of the lavish new hotels set to open in Dubai in 2021
READ MORE
16 of the best pool passes in Dubai that are fully redeemable
READ MORE
All of the restaurants at West Beach, Palm Jumeirah
READ MORE
MOST POPULAR
Celebrate Christmas early with these 'Halfway to Christmas' brunches
Pics of the week: Your best photos of the UAE
What’s On The Bookshelf: Rom-coms great for reading on the beach
Book your holiday package from Dhs1,399 per person with Holidays by flydubai
Immersive cabaret concept The Theater Dubai opens its doors
YOU SHOULD CHECK OUT
Our website uses cookies and other similar technologies to improve our site and your online experience. By continuing to use our website you consent to cookies being used. Read our privacy policy here.