Another reason to get excited about Quran Park…

Dubai is set to get an epic Dhs100 million cave and glass house project as part of an upcoming green space.

The project at Quran Park was given the green light by Sheikh Hamdan Bin Rashid Al Maktoum, Deputy Ruler of Dubai, Minister of Finance and Chairman of Dubai Municipality, this week.

The park will be in Al Khawaneej (near Mirdiff and DXB International) and will feature exhibits that explain the meaning behind many of the stories told in the holy book.

READ MORE
*These classical heavyweights are coming to Dubai Opera*
*This pic of Sheikh Hamdan with a Dubai youngster melts our heart*
*Man fined Dhs250,000 over Facebook threat*

So what will this newest development include?

Well, the glass house will display and sell greenery mentioned in the Quran, while the intriguingly named Cave of Miracles will illustrate some of the book’s most remarkable events using interactive technology.

As well as the glass house and cave, the park will boast an Islamic garden, a desert garden and a garden that pays homage to the famous Andalusian gardens of southern Spain.

The entire park was initially planned to be finished by September 2015, but it will now be open at some point in 2017.

A video released by Dubai Municipality earlier this year shows how much progress has been made on the park so far:

A video posted by Dubai Municipality بلدية دبي (@dubaimunicipality) on Apr 3, 2016 at 2:32am PDT

When finished it will cover 64 hectares (or 640,000 square metres), and will feature many of the plants mentioned in the Quran, including: bananas, pomegranates, olives, melons, grapes, figs, garlic, leeks, onions, corn, lentils, wheat, cumin, ginger, tamarind and basil, squash and cucumbers. Explaining the health benefits of these plants and many of the Quran’s influences on modern medicine will also be a focus of the park.

“The park is considered a great opportunity to explain the meanings of a lot of wonders and miracles mentioned in the Holy Quran in the scientific and medical fields, and the benefits of the plants mentioned in the Holy Quran and how modern medicine is highly dependent upon these plants for treatments as well as their environmental benefits,” said Hussain Lootah, director-general of the Dubai Municipality.

A large greenhouse will be home to 15 of the Quran’s plants that would not be able to grow in Dubai conditions.

There will be walkways featuring patterns and colours that capture the essence of the Holy Text of Islam, as well as an Umrah corner that focuses on the pilgramage, and an outdoor theatre.

We can’t wait to see what it looks like when finished. We’ll definitely keep you updated.

Here’s an illustration that shows the layout of the huge park: 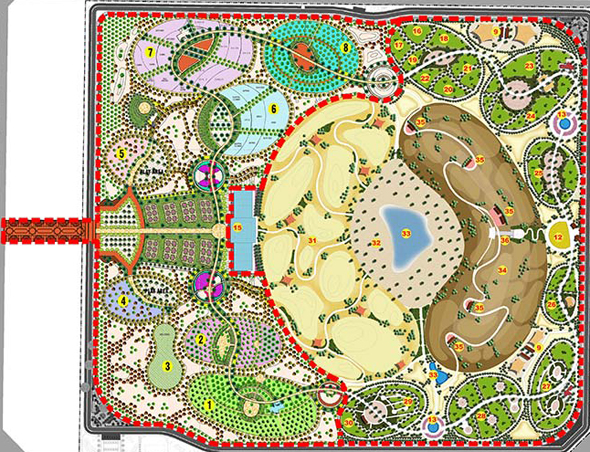