When it comes to future sports stars, we’ve got our eyes on Azizah Nur Laila.

The 9-year-old, who’s from Indonesia but was until recently living in Dubai, has already been dubbed a “beast” at boxing thanks to her super-speedy hooks, tucks and jabs.

So fast is she that she’s already managed to outbox UAE coach, Adam Kechil.

A video of Laila taking on (and, let’s be fair, totally smashing) Kechil has started to catch the world’s attention after being featured on INSIDER Video, where it’s quickly garnered more than eight million views.

Her coach also shared the clip on his YouTube page, where he paid tribute to Laila and her siblings, who took part in his kids’ boxercise class for five months.

READ MORE
*This guy just paid Dhs33 million for this number plate*
*Treetop ropes park Aventura is coming to Dubai*
*Love an after-dark dip in the sea? You should stop*
*Here’s what (and who) causes the most road accidents in Dubai*

Shortly after she joined the class, Kechil realised she could throw punches faster than the older boys – and within three months she was quicker than the coach himself.

“Honestly, she is faster at punching than I am at holding the pads,” Kechil said in the video.

The speed-pad exercise tests an athlete’s natural instinct – so all those quick-fire ducks Laila’s pulling off? They’re not pre-practiced. 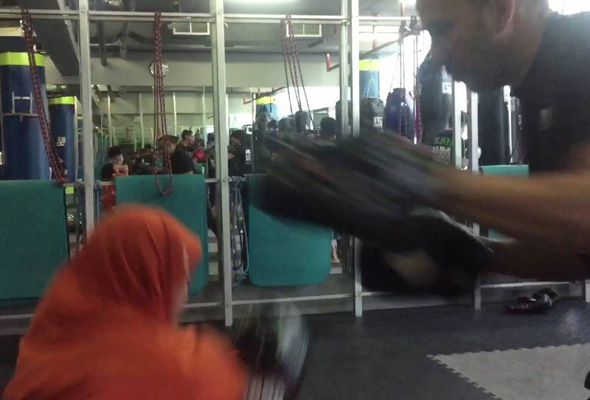 But it’s not just Laila’s talents that impressed her coach – he was also won over by her commitment and dedication.

“[Laila and her siblings] have taught me the beauty of teaching children and reinforced my belief that good and polite kids exist,” Kerchil wrote on YouTube. “They have inspired an old man (yes, me).”

Sadly Laila’s family left Dubai earlier this year as her father no longer had a job, a loss which left Kerchil “more than a little tearful”.

“They were tears of happiness, achievement and tears of sheer distraught. I didn’t expect our journey to be over so soon and moreover so suddenly.”

Though we’re not sure where or what Laila’s doing now, we know this isn’t that last we’ve heard of her…

Indoor
Sport & Fitness
EDITOR’S PICKS
So, when is the next UAE public holiday in 2021?
READ MORE
All of the lavish new hotels set to open in Dubai in 2021
READ MORE
16 of the best pool passes in Dubai that are fully redeemable
READ MORE
All of the restaurants at West Beach, Palm Jumeirah
READ MORE
MOST POPULAR
8 great deals dads can enjoy this Father's Day in Dubai
Abu Dhabi businesses gear up for Green Pass launch tomorrow
What to do if your ALHOSN app is showing incorrect information
Escape to a beautiful all-inclusive seaside staycation right here in the UAE
You can now do yoga in the sky at The View at The Palm
YOU SHOULD CHECK OUT
Our website uses cookies and other similar technologies to improve our site and your online experience. By continuing to use our website you consent to cookies being used. Read our privacy policy here.