Everything you need to know about tonight's super moon

“Ground control to Major Tom…” There’s going to be a huge moon tonight that will be visible from the UAE.

We normally can’t see that many stars in Dubai, being in the city at all (the desert’s another story though): however there’s one astronomical phenomenon happening tonight that’s going to be very visible in the UAE.

On Monday November 14, there’s going to be a super Moon.

A Moon so big and so bright, that NASA are even calling it the “extra-super Moon.”

WHAT’S SO SPECIAL ABOUT THIS SUPER MOON?

So? Well this means that the Moon will appear 14 per cent bigger and 30 per cent brighter than a standard full Moon.

Oh, and the super moon happening tonight will also mark the closest passing of the Moon to the Earth to date in the 21st century.

A super moon of this calibre is not expect to appear again until November 25, 2034.

WHERE’S THE BEST PLACE TO WATCH IT?

According to website Moon Giant, the super Moon will be at its fullest and brightest in the UAE at 5.52pm.

Due to the city’s light and dust pollution, it may be a tad difficult to see any accompanying stars, so if you’re really serious about stargazing your best bet might be to head out into the desert tonight.

WAIT, HOW DO THEY WORK?

Firstly, the Moon has to be passing the Earth at the closest point in its orbit, known as the ‘perigee’.

Secondly, the Sun, Earth and Moon have to be aligned, known as the ‘syzygy’ (pronounced sizzijee).

Hence why the technical term for a super Moon is a perigee-syzygy.

Here’s a little drawing to better illustrate it: 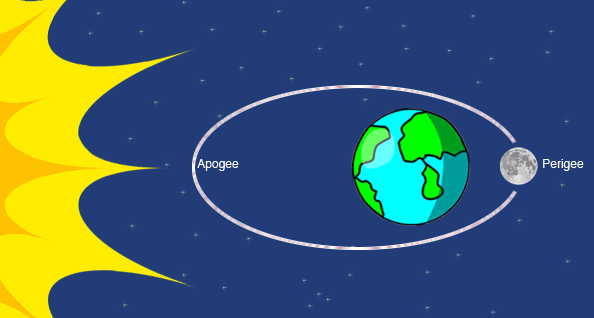 The apogee refers to the Moon’s furthest point away from the Earth in its orbit.