PSA: Jet skis are not allowed on the Dubai Canal

It’s just been announced that a number of vessels are banned from going down the Dubai Canal. Details here…

Can’t wait to whizz around the Dubai Canal on your beefed up jet ski?

Think again. The RTA has just announced that some vessels are banned from entering the newly-opened waterway – including jet skis, traditional wooden dhows carrying goods, fishing boats and passenger vessels that are more than 35 metres in length.

The banned vessels will be fined up to Dhs5,000 if they enter the new part of the Canal reports Gulf News.

Jet skis are not allowed because the RTA considers them unsafe in a busy waterway like the Dubai Canal, which is six metres deep and up to 120 metres wide.

What kind of boats can float through the Canal? Well small passenger boats can and tourist dhows are allowed as well (so a wooden boat where people have dinner is fine, but one carrying fridges to be transported overseas is not).

Just don’t exceed a speed of seven knots, if you do you can be fined Dhs2,000. 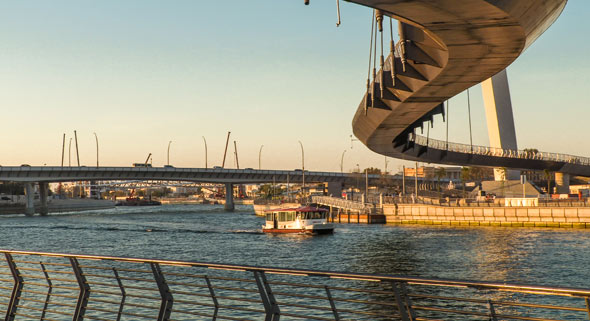 The RTA’s public transport boats are allowed to freely traverse the Canal (and other vessels must make sure not to get in their way).

And, of course, the RTA’s own public transport vessels are free to navigate the Canal. You can read about the stations that have opened along the Canal here.

Remember, you can also take a stroll along the Canal now (and can even catch the metro there – just get off at Business Bay and walk up the SZR bridge):

The 3.2 kilometre new portion of the canal links Business Bay with the Arabian Gulf, and has turned areas of Dubai like Satwa, Downtown, Zabeel, Oud Metha, Karama and Bur Dubai into one huge island (as they are now completely waterlocked).

The RTA hasn’t specifically mentioned whether kayaks are banned or not, but there have already been keen kayakers spotted on the Canal:

A hardy kayaker taking on the #Dubaicanal and not at all fazed by the boats absolutely hoofing it through. #viewsfromthedubaicanal #bikeride #dubai #boardwalk #brave #mydubai #westin #kayak #uae #dubaiwinter #canal

News
Outdoor
Sport & Fitness
EDITOR’S PICKS
Dubai hotels and restaurants to suspend entertainment until further notice
READ MORE
9 royal-approved Dubai restaurants
READ MORE
16 of the best beach bars in Dubai for sundowners
READ MORE
Where to get the Covid-19 vaccine in Dubai, Abu Dhabi and across the UAE
READ MORE
MOST POPULAR
Dubai announces new restrictions on restaurants, gyms, weddings and social events
8 of the best homegrown burger concepts in Dubai
Direct Etihad flights to Qatar from Abu Dhabi are inbound next week
Dubai Health Authority answers your questions regarding the vaccination
Expo Dubai 2020: What’s inside the Sustainability Pavilion?
YOU SHOULD CHECK OUT
Our website uses cookies and other similar technologies to improve our site and your online experience. By continuing to use our website you consent to cookies being used. Read our privacy policy here.