The Trump International Golf Club Dubai is now officially open – and President Donald Trump’s two sons, Donald Jr and Eric, flew into Dubai for the occasion: attending a private lunch and then a 1000-strong opening ceremony. 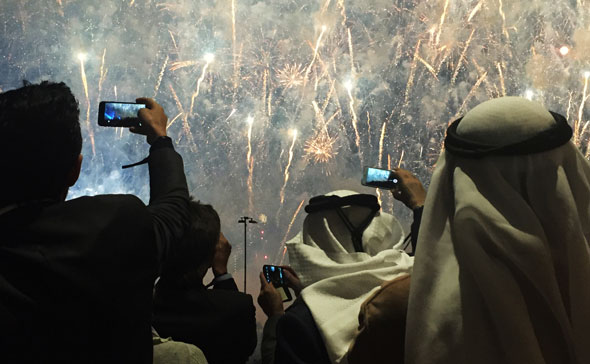 There were fireworks at the Dubai party (naturally)

“It’s truly awe inspiring,” Donald Trump Jr said at the golf course’s opening party. “In Dubai, if you can envision it, you can build it.”

Now that Donald Trump is POTUS, his sons run his business interests

“To see the incredible vision Sheikh Mohammed has been able to put forward for this country is truly awe-inspiring,” he added, referring to the development Dubai has seen under ruler H.H. Sheikh Mohammed bin Rashid al Maktoum.

“As a developer, which lets us be somewhat artists at times, it is truly incredible to be part of that vision,” he added.

Remember, President Donald Trump is currently pushing for a ban on all travel into the USA for people from seven Muslim-majority countries – this would extend to more than a million people in Dubai.

This is the first Trump property project launch since Trump was sworn in as the 45th President of the United States just under a month ago on January 20th.

Congratulations to our team at @TrumpGolfDubai on an amazing opening! We are proud of all of you! @TrumpGolf pic.twitter.com/mQLsH22QdZ

There were fireworks and classical music at the opening ceremony (as well as GCC royal family members), and during the event Trump’s sons called Damac chairman Hussain Sajwani a “true friend” and said he had an “amazing family”.

Keen to play a round on the 7229-yard, par 71 Gil Hanse-designed course? Well it won’t come cheap – fees are Dhs895 (on weekdays) and Dhs995 (on weekends: read more about the actual golf side of things here.

Damac pays a licensing fee to the Trump Organization to use the Trump brand. The relationship between President Trump and Damac chairman Sajwani was in the international spotlight last month when then-President-elect Trump said that he had turned down a $2bn deal offered by Sajwani because he did not want to “take advantage” of his position.

A post shared by LUXURY PROPERTY CONSULTANT (@dubailuxuryproperty) on Feb 18, 2017 at 11:52am PST

Sajwani and his family also spent New Year’s Eve with the Trump family at a party at Trump’s Mar-a-Lago club in Florida, where Trump referred to them as “the most beautiful people from Dubai.”

Outdoor
Sport & Fitness
EDITOR’S PICKS
What’s On Nightlife Awards 2021: Here are the nominees...
READ MORE
It's back! What's On Lock In returns to Media One Hotel
READ MORE
Arts and culture: 5 spots we can't wait to visit at Expo 2020 Dubai
READ MORE
UAE petrol prices are set to decrease in September 2021
READ MORE
MOST POPULAR
Movie review: How good is new sci-fi epic, Dune?
Pics of the week: Your best photos of the UAE
A stylish new Southern-European Neo Bistro is opening in Dubai
Staycation at this stunning hotel which is now dog-friendly
Get an Expo 2020 Dubai monthly pass for Dhs95 valid for the whole of October
YOU SHOULD CHECK OUT
Our website uses cookies and other similar technologies to improve our site and your online experience. By continuing to use our website you consent to cookies being used. Read our privacy policy here.