It looks like Dubai Safari is back on track

The 10,000-strong animal sanctuary gets closer to opening its doors…

In October, we reported that the eagerly anticipated opening of Dubai Safari – a 119-hectare animal sanctuary being built by Dubai Municipality – had suffered summer-related setbacks meaning it would miss its scheduled January 2017 launch.

This was clearly the case as here we are in April and, sadly, we’re not gawking at herds of wildebeest sweeping majestically across the manmade plains of Al Warqaa where the park is currently under construction.

Fear not though, animal lovers of the UAE, because it looks like Dubai Zoo in Jumeirah will soon shut down and be replaced by the new, far larger site.

How do we know this? Well, Dubai Municipality published this video on Twitter yesterday showing HE Eng. Hussain Nasser Lootah, Director General of Dubai Municipality, touring the sanctuary to inspect the “latest updates and developments” to the project.

While the video doesn’t give too much away, we did spot a trio of alligators sunbathing on a large stone outcropping, confirming that, if not all, at least some of the 10,000 animals reported to be housed in the park have already started to be brought in. 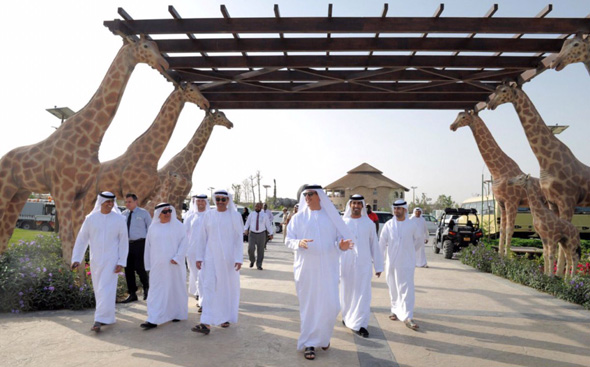 A photo shows Municipality officials touring the facility a few days ago (it’s looking pretty close to finished to us).

Dubai Municipality still haven’t set a concrete opening date – a previously rescheduled date of March 31 was again missed – however, the Khaleej Times is reporting that work on the project is due to complete “within the next few months.”

We’ll be sure to keep you updated as we hear more.

Sport & Fitness
EDITOR’S PICKS
Ramadan in Dubai: 40 iftars to try
READ MORE
Where can Dubai residents travel? Check out these 14 destinations
READ MORE
Rumours, facts and reveals: New Abu Dhabi bars and restaurants
READ MORE
UAE announces reduced working hours for Ramadan 2021
READ MORE
MOST POPULAR
20 places to enjoy culture and history in Abu Dhabi
3 mega-venues opening in Dubai that you need on your radar
6 fun things to do in Abu Dhabi this week: April 18 to 21
Book an unforgettable escape to Mӧvenpick Resort Kuredhivaru Maldives
Review: Is Lucky Fish worth its salt at West Beach?
YOU SHOULD CHECK OUT
Our website uses cookies and other similar technologies to improve our site and your online experience. By continuing to use our website you consent to cookies being used. Read our privacy policy here.