Watch: Here's what Dubai Creek Harbour is going to look like...

Remember The Tower, the 928-metre-high architectural marvel that, when completed in 2020, will soar past the Burj Khalifa (and likely become the world’s new tallest building)?

Well, it’s only fitting that such a structure should have an equally impressive home. And by the looks of this video posted to YouTube by Emaar, the brand new Dubai Creek Harbour development is going to tick all of the boxes – and then some.

The stunning video, titled “Fly Through Dubai Creek Harbour”, offers a glimpse into what the Dhs3.65 billion suburb will look like.

The six-square-kilometre development (yes, that’s twice the size of Downtown Dubai) will be located near the Ras Al Khor Wildlife Sanctuary, offering views of both Dubai Creek and the Dubai skyline.

The Tower will act as the suburb’s centerpiece, and has been described by H.H. Sheikh Mohammed bin Rashid Al Maktoum, vice president of the UAE and ruler of Dubai, as “a unique architectural masterpiece on par with Burj Khalifa and the Eiffel Tower”. 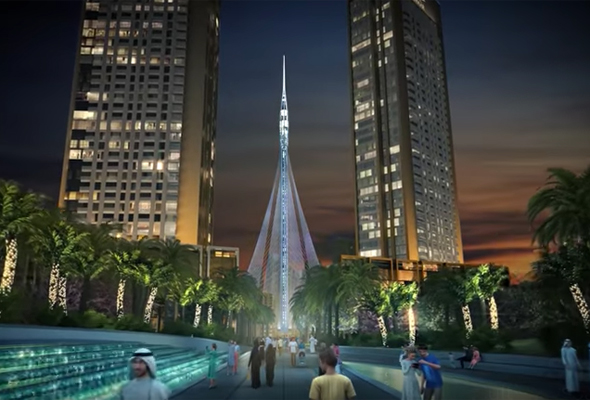 There will be a viewing deck with rotating balconies so visitors can enjoy 360-degree vistas, and beneath the structure, there will be an epic plaza dotted with fountains (remember, Emaar are also the masters behind The Dubai Fountain, so they love a good water show).

The development will also boast eight million square feet of retail space, 39,000 residences, and 22 hotels, as well as another ambitious building project called Dubai Twin Towers (which will naturally be the tallest twin towers in the world).

By the looks of the video, there will also be a picturesque boardwalk for visitors to stroll along, with beautiful views, palm trees, and even more fountains.

Bored of the Beach? Feeling meh about the Marina? Well, start getting excited for Dubai Creek Harbour… we see ourselves spending a LOT of time here in the not-too-distant future.