We do things fast here in Dubai, and the city is going to build the world’s tallest tower – yes, it’ll stand higher than the Burj Khalifa – in just a few years.

The Tower is officially under construction, after H.H. Sheikh Mohammed bin Rashid Al Maktoum, ruler of Dubai and Vice President of the UAE, laid the foundation stone for it yesterday. The huge skyscraper along Dubai Creek will be the “world’s tallest tower when it’s completed in 2020” according to Dubai Media Office.

“Years ago, we launched Burj Khalifa, the tallest skyscraper in the world,” Sheikh Mohammed said at the ceremony. “Today, we are celebrating the foundation of a new structure that represents another phase in our journey to be at the forefront of growth in various sectors.” 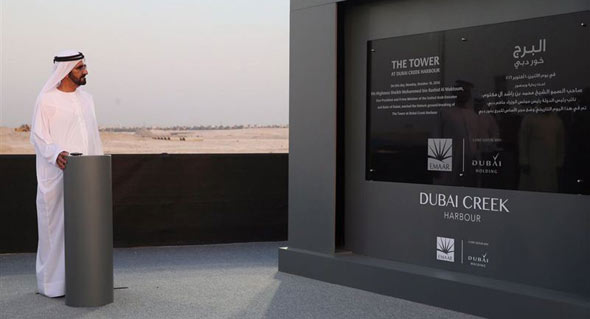 “Thanks to Allah, we have created a strong foundation for a brighter future, and we are proud of what we achieved,” he added. “We are used to challenging ourselves, which is key to achieving new benchmarks. At the same time, we will spare no effort to support existing projects and explore new opportunities in order to further cement our global leadership.”

The fanciest part of the super-tall Tower will be the Pinnacle Room, which will be high up in the structure and will have VIP observation garden decks with views stretching over the city.

THE NEW CITY THE TOWER IS BEING BUILT IN

Inspired by Islamic architecture and part of the Dubai Creek Harbour development, the tower is inspired by a blooming lily and will be an architectural and engineering marvel due to its eye-catchingly slender design, the delicate mesh-like structure around it and, of course, its mammoth size. It will cost around Dhs3.67 billion to construct.

The Dubai Creek Harbour development sits near the Ras Al Khor area of Dubai. The huge under-construction suburb will feature eight million square feet of retail space, 39,000 apartments and homes, 22 hotels and another project called Dubai Twin Towers (these will be the tallest twin towers in the world, naturally).

It will also have a 4.5 kilometre Creek Boardwalk, which is sure to be a lovely area to walk around considering how close Dubai Creek Harbour will be to natural wetlands and the Ras Al Khor wildlife sanctuary (which is home to 67 species of birds).

The view from Ras Al Khor is pretty spectacular.

Culture
News
EDITOR’S PICKS
Ramadan in Dubai: 38 iftars to try
READ MORE
Where can Dubai residents travel? Check out these 14 destinations
READ MORE
Rumours, facts and reveals: New Abu Dhabi bars and restaurants
READ MORE
UAE announces reduced working hours for Ramadan 2021
READ MORE
MOST POPULAR
Dine under Bedouin-inspired tents or at home with Amaseena this Ramadan
5 ways to stay fit the fun way at Hudayriyat Island this Ramadan
How many days will we get off for Eid Al Fitr 2021?
Urban Outfitters' sister brand Anthropologie to open in The Dubai Mall
This double vacation offer includes stays in both Dubai and the Maldives
YOU SHOULD CHECK OUT
Our website uses cookies and other similar technologies to improve our site and your online experience. By continuing to use our website you consent to cookies being used. Read our privacy policy here.