The line will also feature stops in Fujairah, Sharjah and Ras Al Khaimah…

If you don’t have a car, travel between the Emirates can sometimes be a little tricky if you’re looking to head off the regular bus routes. But that’s set to change, as Etihad Rail have unveiled plans for a train track that will connect major ports across the emirates.

Etihad Rail, the developer and operator of the UAE’s national railway network, are in the process of completing a 1,200km rail route. Once complete, the route will act as a transport corridor across all the emirates, according to a statement.

Although the network is currently used for freight services, there are plans to turn it into a passenger route at a later stage.

Phase one of the project became operational in 2016 connects Al Dhafra to Abu Dhabi, with the second phase of the project will extend over an impressive 605 kilometres. When complete, the total line will run across 1200km, with ports in Sharjah, Fujairah and Ras Al Khaimah.

“Once fully established, the passenger network will connect principal centres of population within the UAE, and subsequently other neighbouring GCC countries, offering a safer, more efficient, more comfortable and more environmentally friendly mode of transport,” said a statement from December 2018 on the Etihad Rail website.

That will definitely make a weekend away in one of our neighbouring emirates – or even further afield – even easier.

You can check out the planned passenger map here, which shows just how far the line is set to extend: 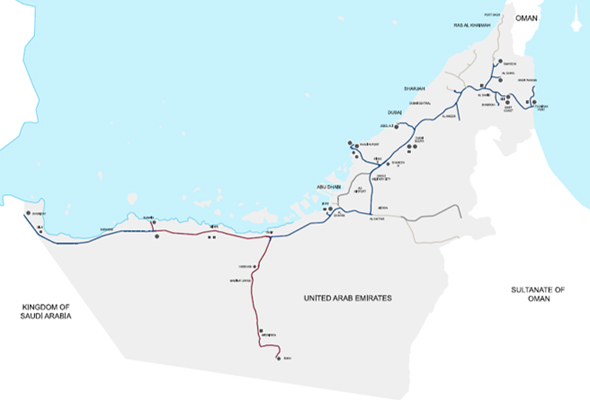 ALSO READ: How to get from Dubai to Abu Dhabi without a car

Travel outside of the Emirates is becoming even easier too. Recently Dubai’s Roads and Transport Authority (RTA) launched a three time daily bus service to Muscat, Oman, with single fares priced at Dhs55.

Talk about a value day out!

News
Transport
EDITOR’S PICKS
Ramadan in Dubai: 48 iftars to try
READ MORE
Where can Dubai residents travel? Check out these 14 destinations
READ MORE
Rumours, facts and reveals: New Abu Dhabi bars and restaurants
READ MORE
UAE announces reduced working hours for Ramadan 2021
READ MORE
MOST POPULAR
#ThisIsNotABuffet: Here's how Alserkal Avenue celebrates Ramadan
Review: Could Hunter & Barrel be your favourite new steakhouse?
French restaurant La Serre to open in Habtoor Palace Dubai later this year
10 amazing things to do in Dubai this weekend: April 22 to 24
Sweet treats to enjoy this Ramadan in Dubai
YOU SHOULD CHECK OUT
Our website uses cookies and other similar technologies to improve our site and your online experience. By continuing to use our website you consent to cookies being used. Read our privacy policy here.