Atlantis The Palm release 15 baby sharks into the ocean

In a move to show its continued commitment to marine sustainability, Atlantis The Palm has released fifteen baby sharks back into the ocean. The release of the Arabian carpet sharks took place last month, and also saw two stingrays put back into the wild. 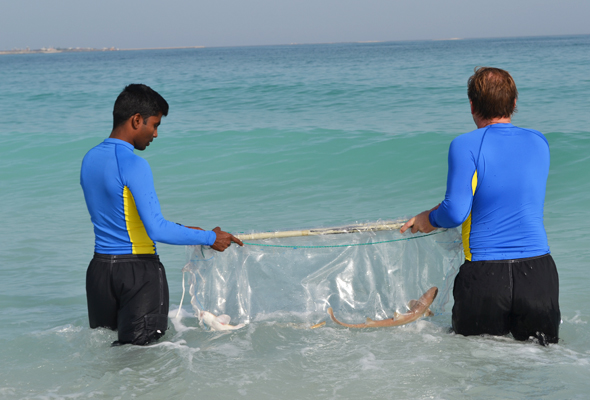 Releasing the Arabian carpet sharks was the latest in a number of efforts by the hotel in marine sustainability, with other projects including beach cleanups, mangrove planting and wildlife releases happening throughout the year. Atlantis The Pam work in conjunction with Dubai Municipality and Dubai’s Ministry of Climate Change and Environment to make their work possible.

Born in Atlantis’ fish hospital, they were studied by marine experts and deemed fit enough, before being released into the ocean at Jebel Ali Wetland Sanctuary.

Natasha Christie, Director of The Lost Chambers, Atlantis, The Palm, said: “The sustainability and prosperity of the marine environment is extremely important to Atlantis.”

“We regularly carry out a number of initiatives such as wildlife releases and beach cleanups as we believe everyone has a part to play in making sure future generations can enjoy Dubai and the ocean as much as we are able to.”

News
Staycations
EDITOR’S PICKS
UAE holiday dates announced for National Day
READ MORE
Emirates Dubai 7s is back: Here's why we're excited...
READ MORE
Tennis ace Andy Murray to play at Mubadala World Tennis Championship
READ MORE
UAE 50: Where to watch National Day fireworks in Dubai
READ MORE
MOST POPULAR
UAE confirms its first case of the Omicron variant
Alhosn Green Pass to only be valid for 14 days after negative PCR
20 of the best things to do in Abu Dhabi this long weekend: Part 2
First look: London-loved restaurant The Cinnamon Club opens in Dubai
Check out this amazing display at the world's highest outdoor infinity pool
YOU SHOULD CHECK OUT
Our website uses cookies and other similar technologies to improve our site and your online experience. By continuing to use our website you consent to cookies being used. Read our privacy policy here.