You’ll struggle to find a Friends fan that doesn’t know all the words to its iconic theme song. And Friends fans need to get themselves to The Dubai Fountain next week as the tune, originally by The Rembrandts, will be played at The Dubai Fountain on Sunday September 22 in celebration of the show’s 25th anniversary.

Alongside the choreographed fountain show will also be a themed LED show displayed on Burj Khalifa. The one-off show is only taking place on Sunday September 22 so make sure you’re there at either 8.30pm or 9.30pm to catch it.

As previously reported, the famous couch from the series will also be displayed in Dubai this month. Having spent a week at The Dubai Mall, the couch moves to The Dubai Fountains floating deck on Sunday September 22, the 25th anniversary date of the show, where it will be displayed on the water with Burj Khalifa in the background – now that’s an Insta shot we need. 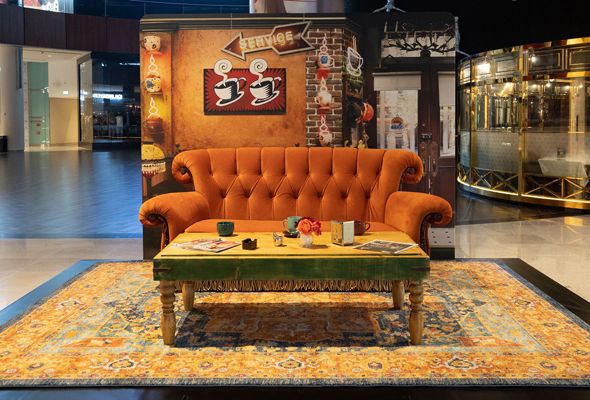 ALSO READ: Famous ‘Friends’ couch to be displayed at Dubai Mall and Burj Khalifa this month

Giving true fans the perfect opportunity to celebrate the anniversary this month, first you’ll be able to capture a moment in history as you squash up with your gang on a replica of the famous couch. Then, make sure you’re at The Dubai Fountain to watch the spectacular fountain and LED show dedicated to the series, with the couch in prime view.

Despite the series coming to a close in 2004, Friends made a recent comeback to the hearts of the public when it was added to Netflix’s programming. All 236 episodes, spread over 10 seasons, are still available on the streaming platform.

Culture
Things to do
EDITOR’S PICKS
Ramadan in Dubai: 40 iftars to try
READ MORE
Where can Dubai residents travel? Check out these 14 destinations
READ MORE
Rumours, facts and reveals: New Abu Dhabi bars and restaurants
READ MORE
UAE announces reduced working hours for Ramadan 2021
READ MORE
MOST POPULAR
Sheraton Mall of the Emirates has a lot to offer this Ramadan
Looking for a cosy long stay residence in Dubai? Check this out...
Have you spotted the new Talabat Patrol team on Abu Dhabi roads?
Iftar home delivery for one? Here are some options...
Stunning Australian restaurant Hunter & Barrel is now open
YOU SHOULD CHECK OUT
Our website uses cookies and other similar technologies to improve our site and your online experience. By continuing to use our website you consent to cookies being used. Read our privacy policy here.