Review: Vox Cinemas Drive-in at Mall of the Emirates

News of a drive-in cinema concept opening in Dubai appeared to come out of nowhere. While many residents assumed they’d have to wait a little while longer before enjoying their favourite pastime again, a new way to social distance while watching the latest blockbuster has now arrived – Vox Cinemas Drive-In.

After receiving clear instructions on how to enter the Mall of Emirates car park, we arrived ahead of the scheduled 7.30pm start time. Pulling up, there was an abundance of mask-wearing staff giving clear directions toward the red-carpeted entrance.

We roll down the left window to have our QR code scanned (top marks for the paperless tickets), while through the right window we’re offered soft drinks and snacks. 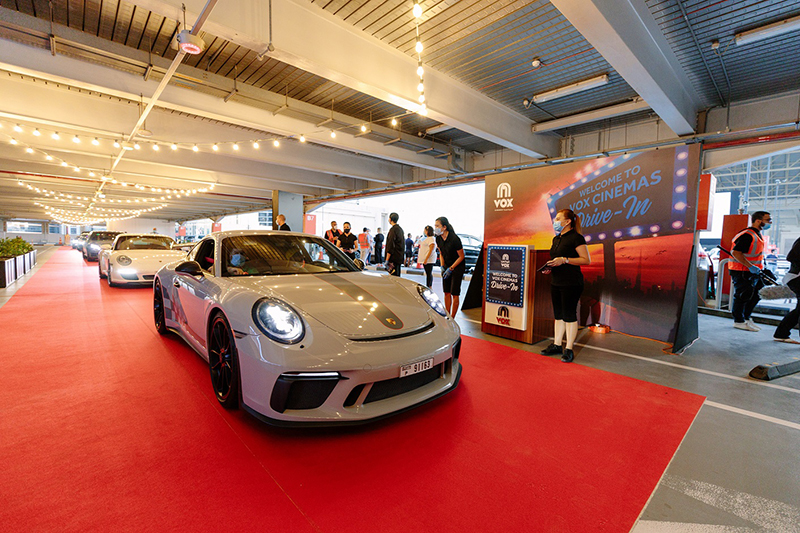 Bags of popcorn are included with cute handwritten movie quotes, as well as a generous portion of nachos, a big bag of M&Ms and bottles of Pepsi. The selection more than enough for two people to enjoy throughout the film.

A parking space is allocated based on the height of your car so everyone can easily see the huge screen, which has been erected under the Ski Dubai slope.

The movie’s audio is transmitted through a radio channel which was indicated on the screen before it started. While our car doesn’t have the most cutting-edge speakers, the booming surround sound effect makes you feel as though you’re really in the cinema. 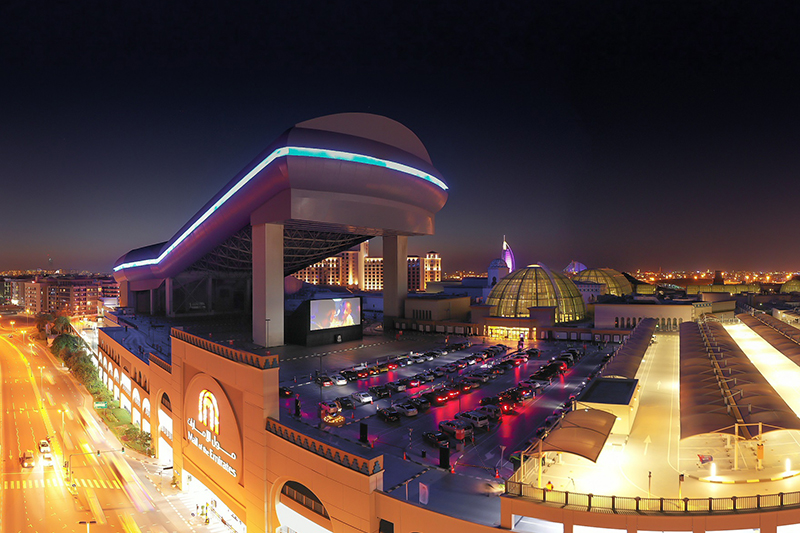 The best part for us, was the realisation that some of the most problematic things about going to a real cinema (such as having to turn your phone off, not being able to speak to the person next to you, or having someone kick the back of your chair) can all be avoided with the privacy of a drive-in cinema.

You’re free to take your shoes off, get comfy, chat about the movie, and even reply to a text with no repercussions. The biggest disturbance you might face is if another driver forgets to turn their headlights off, but the staff are quick to rectify this.

Despite bringing in the concept in light of social distancing measures, we really hope the drive-in cinema is here to stay. Offering a bit of variety into Dubai’s things to do scene is a welcome action, especially while many of our other favourite activities are still suspended.

Vox Cinemas Drive-In launches on Sunday May 17, with tickets priced per car at Dhs180+VAT, including the movie and plenty of snacks and soft drinks. A maximum of two people are allowed per car, with children aged three to 12 and adults over 60 not permitted.

Tickets on sale soon at uae.voxcinemas.com. Movie showtimes will be revealed every Monday.

Film
Things to do
EDITOR’S PICKS
Here's the full list of UAE public holidays in 2023
READ MORE
23 incredible things to look forward to in the UAE in 2023
READ MORE
Hidden gems: 10 UAE desert pop-ups to discover this winter
READ MORE
Where to travel in 2023: 10 new flight routes from the UAE
READ MORE
MOST POPULAR
W Abu Dhabi will host a second edition of its sustainable Looped In menu
The UAE law changes on marriage, divorce and child custody to know about from February 1
5 fabulous new Dubai hotels to check-in to
Pics of the week: Your best photos of the UAE
Dhow & Anchor has got you covered every day of the week
YOU SHOULD CHECK OUT
Our website uses cookies and other similar technologies to improve our site and your online experience. By continuing to use our website you consent to cookies being used. Read our privacy policy here.