Oh, that glorious focaccia? Yeah, I made that with my bare hands…

It’s been a long ol’ few months, and you can’t be blamed if your food game is coming up short: there’s only so many times you can order Deliveroo before it gets absurd, or open up a can of whatever’s left in the back of your cupboard. You don’t really want to learn to cook from scratch, but you also really don’t want to go to the supermarket, which is why a handful of restaurants and chefs have got your back, with make-at-home food kits that allow you to recreate your favourite restaurant dishes in your own kitchen. One that we were really happy to learn about was folly by Nick and Scott.

We signed up with the homemade olive oil and rosemary focaccia bread, and the button mushroom risotto, and here’s what we found.

Each box serves two adults and is accompanied by a handy recipe card along with a QR, which direct home-chefs to a simple step-by-step video. Inside the box includes all the ingredients you’ll need, too. 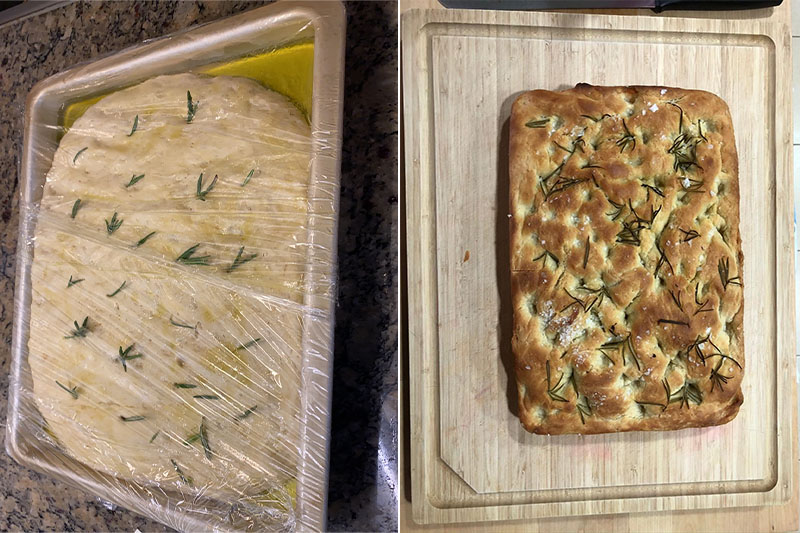 Making focaccia is a lengthy process, about three hours total, so we started with that. Everything is broken down so simply it’s almost impossible to get it wrong. Knead, prove, add rosemary and olive oil, and prove some more until it’s time to bake. Meanwhile the risotto (often a rather daunting dish to create at home), was also made simple, which clear instructions. It’s like painting-by-numbers. To have all the quality ingredients (and the right amount of each) takes the guess work out of cooking.

Our dining room table never looked so good. We had a plate full of fragrant focaccia, and a cauldron of cheesy, comforting risotto. So excited were we, that we forgot to garnish our risotto with parsley as instructed, so it probably didn’t look quite as attractive as the folly team would have liked, but to us, mere chef amateurs, it was still a thing of beauty.

Review: we test out Dough It Yourself gourmet pizza kits

Given that we were absolutely delighted with the outcome of both these dishes, we’ve already paid for two more kits. The remaining boxes available to order this month include a coconut chicken curry (on Thursday June 11), and fish ‘n’ chips with crushed peas and tartare sauce (on Thursday June 18). Date nights, sorted.

Honestly, it feels like an absolute bargain at only Dhs100 (plus delivery charge), for a meal for two.

Eat & Drink
Reviews
EDITOR’S PICKS
Here's the full list of UAE public holidays in 2023
READ MORE
23 incredible things to look forward to in the UAE in 2023
READ MORE
Hidden gems: 10 UAE desert pop-ups to discover this winter
READ MORE
Where to travel in 2023: 10 new flight routes from the UAE
READ MORE
MOST POPULAR
6 brilliant things to do in Abu Dhabi this week: Feb 6 to 9
Dubai tourism increases by a massive 97 per cent
16 incredible mega projects coming to Abu Dhabi soon
The epic Asian Le Mans Series returns to Dubai Autodrome this month
Snapped: Celebrities spotted in the UAE this week
YOU SHOULD CHECK OUT
Our website uses cookies and other similar technologies to improve our site and your online experience. By continuing to use our website you consent to cookies being used. Read our privacy policy here.