11 of the tastiest vegetarian and vegan burgers in Dubai

We’ve got no beef with these burgers…

Veganuary is upon us, and all over the land, vegan-curious folk are wondering how to get their comfort food fix without the beef. If you want the heft and satisfaction that only a good burger can bring, but you’re ditching meat for whatever reason, then get stuck into one of these tasty vegetarian or vegan burgers in Dubai instead. 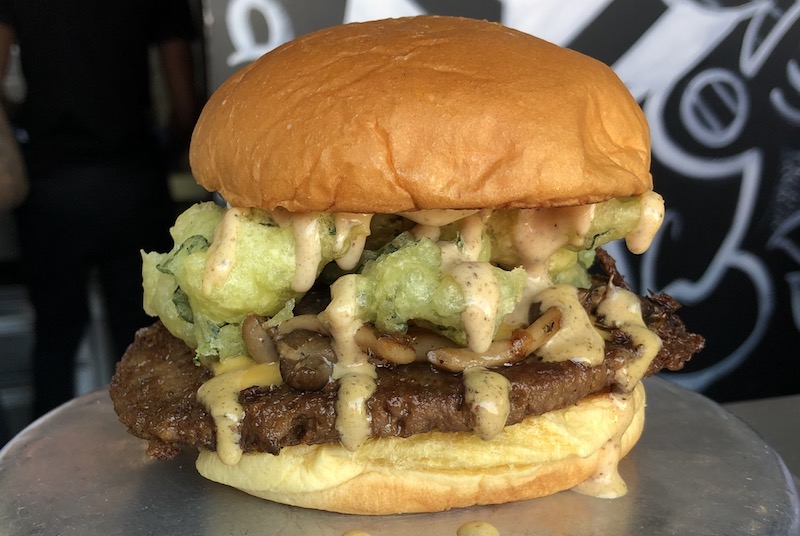 The High Joint team is constantly experimenting with new burgers, and when they decided to launch a vegetarian burger using Future Farms plant-based patties, they engaged in a weeks-long competition to find the right creation. The High Leaf was eventually crowned the well-deserving winner, combing the Future Farms smashed patties with homemade tomato chutney, date mayo, tempura kale, American cheese and shimeji mushrooms. It’s a brilliant balance of salty, sweet and gentle spice – and a worthwhile deviation from the regular High Joint menu. Try the High Leaf at the Al Manara venue, or order online via Chatfood. 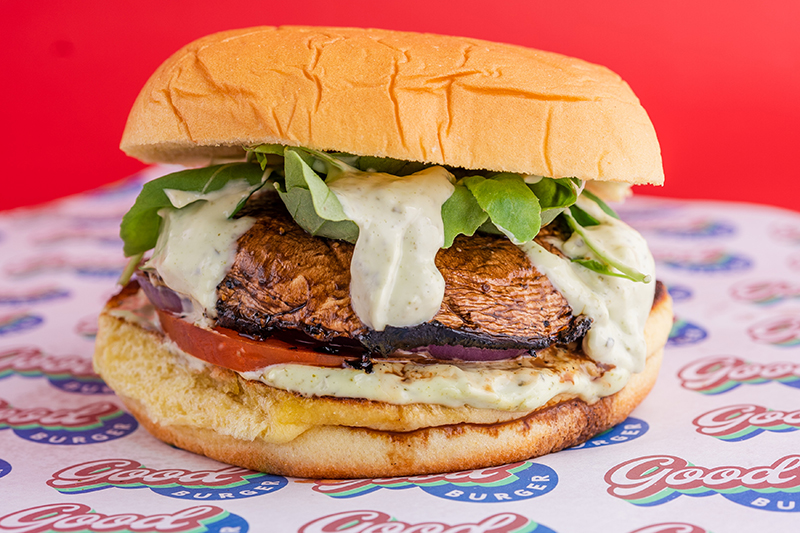 Got that itch for a good, flavour-packed burger? Just because you’re forgoing meat doesn’t mean you can’t enjoy one. Good Burger serves up a fantastic meaty portobello mushroom in place of the standard patty, with a choice of toppings such as basil mayo, tomato, red onion and rocket leaves. You can order it on Deliveroo or dine-in at the JLT branch. 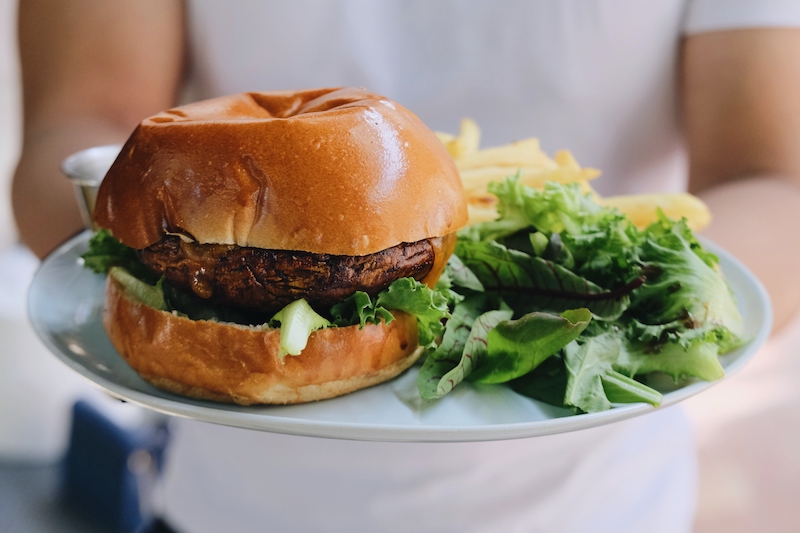 Another knockout burger that subs in a portobello for the meat is the mushroom burger from desgin-savvy cafe Cassette, in Al Quoz. It involves a marinated portobello mushroom on a fluffy potato bun, along with lettuce, tomato, homemade pickles and Red Leicester cheese (whip that out to make it vegan). 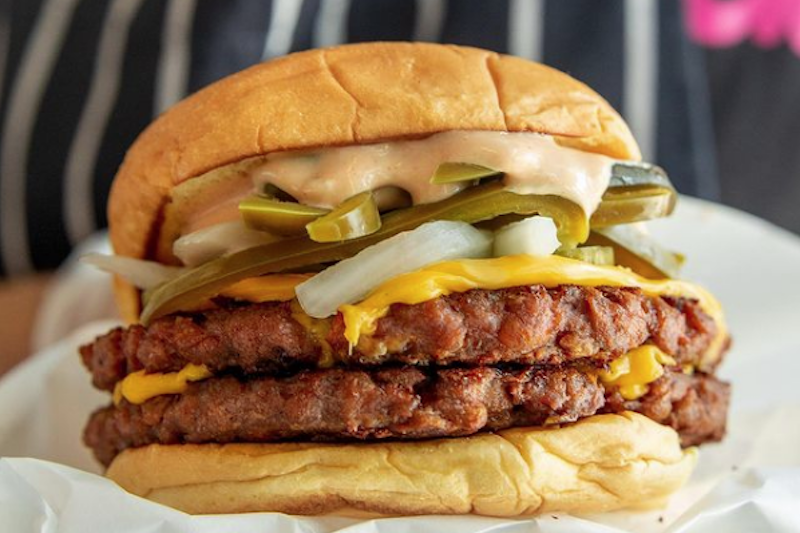 Pickl burgers are known for their down ‘n’ dirty burgers, using chuck beef patties and saucy slabs of fried chicken, but there’s a cleaner, meat-free version available too. Pickl’s vegetarian burger is a no-nonsense combination of Beyond plant-based patty, secret sauce, cheese and pickles on a squishy potato bun. It’s available in the JLT store or via Deliveroo. 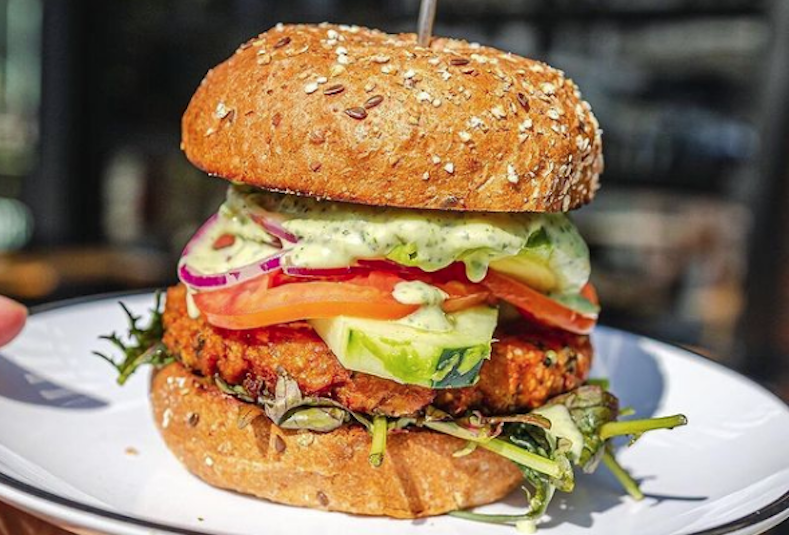 Bareburger has one of the most extensive vegan burger menus in town. First, choose your patty (Beyond burger, sweet potato and quinoa, black bean and wild rice, or fried oyster mushroom), then select your bun and choice of vegan cheese, then accessorise with all sorts of tasty toppings, including organic leaves, caramelised onions and homemade pickles, and finish it off with a range of sauces and spreads. 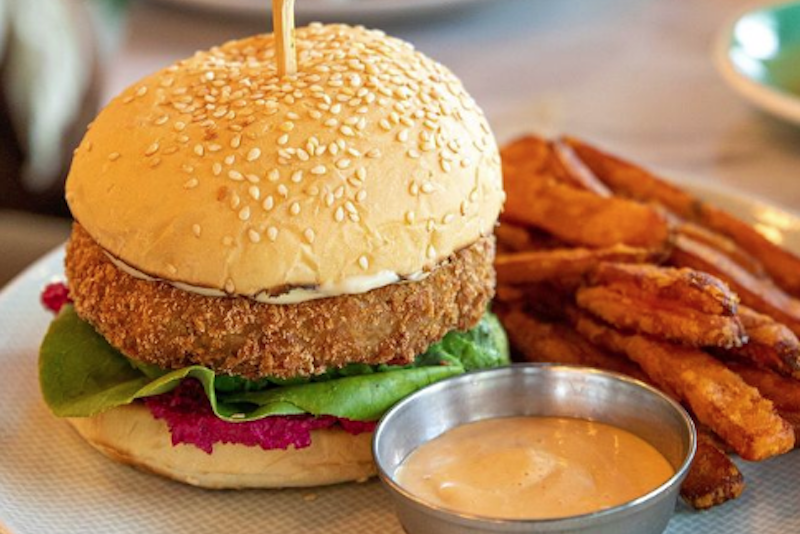 Even the mayo has undergone a vegan makeover at Common Grounds. Its virtuous vegan burger includes a crumbed avocado and chickpea patty, beetroot hummus, lettuce, pickled onion and vegan mayo in a vegan potato bun, with your choice of sweet potato fries or green salad.

Common Grounds, DIFC, JLT and Mall of the Emirates, @_common.grounds_ 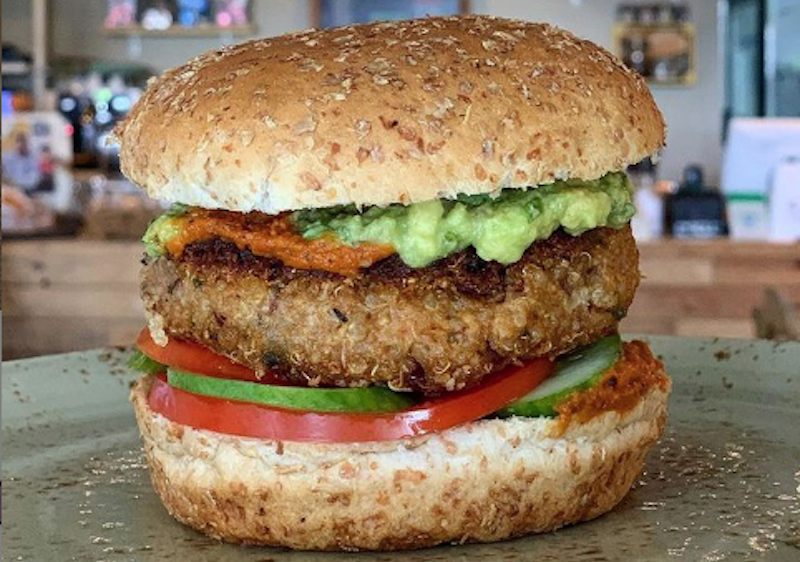 The menu at Little Erth seems to be laced with good vibes. For your wholesome burger fix, order the Buddha burger made with quinoa, kidney beans and sweet potato, served with salad or air-fried sweet potatoes. Or, try the raw burger sliders, two mini burgers made with walnuts, flaxseeds, miso paste and vegetables, topped with basil cashew cream. 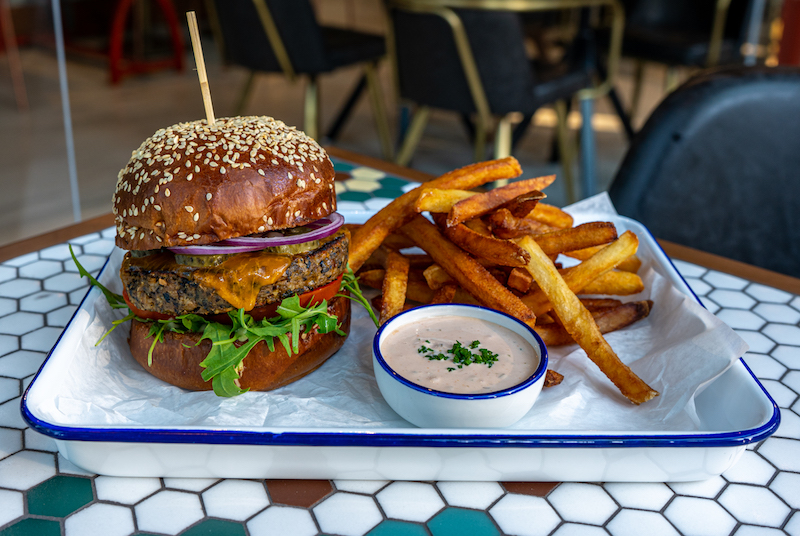 LDC Kitchen + Coffee’s very veggie burger is a mouthwatering combination of homemade black bean, cashew and shiitake patty, with dijonnaise, pickles, onion and cheddar cheese on a brioche bun. As a bonus, it comes with LDC’s seriously good hand-cut fries on the side.

LDC Kitchen + Coffee, One JLT, daily 7am to midnight (open until 1am on weekends). @ldckitchen 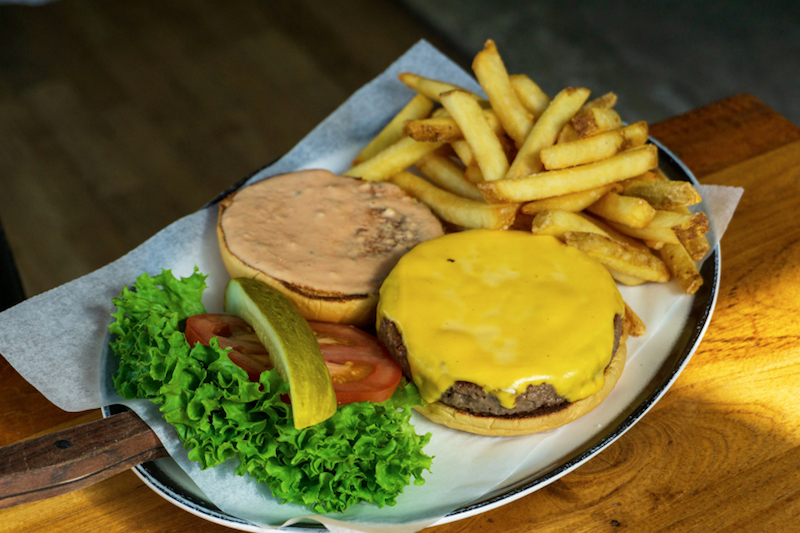 At this gourmet burger joint, if you’re abstaining from meat, zero in on the Impossible All-American (available vegan on request), or the vegan burger with black bean patty, salsa verde, pickled onions, cilantro, vegan mayo on a vegan potato roll. 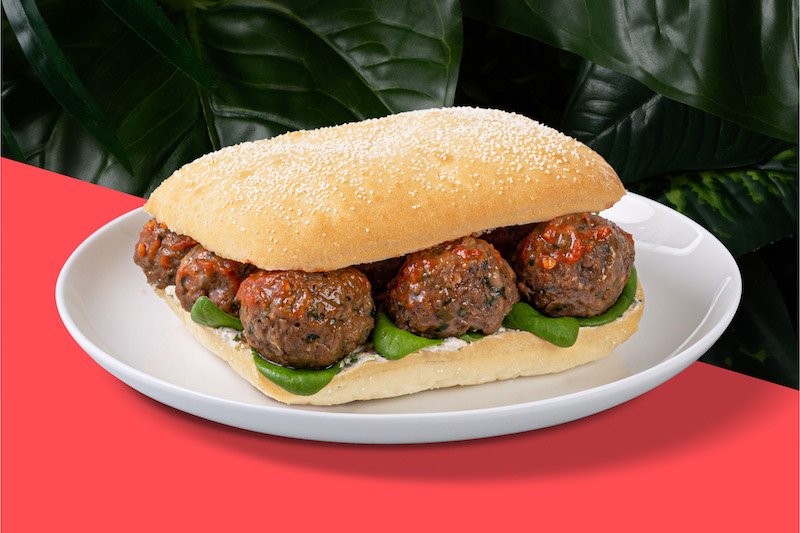 Global coffee chain Starbucks is dipping its toes into the meat-free zone, with the launch of two new vegetarian sandwiches on its grab-and-go menu. The Beyond Meat triple cheese wrap and Beyond Meatball Arabian ciabatta feature plant-based protein (although there’s dairy-based cheese in both, so they’re not 100 per cent vegan at this stage). 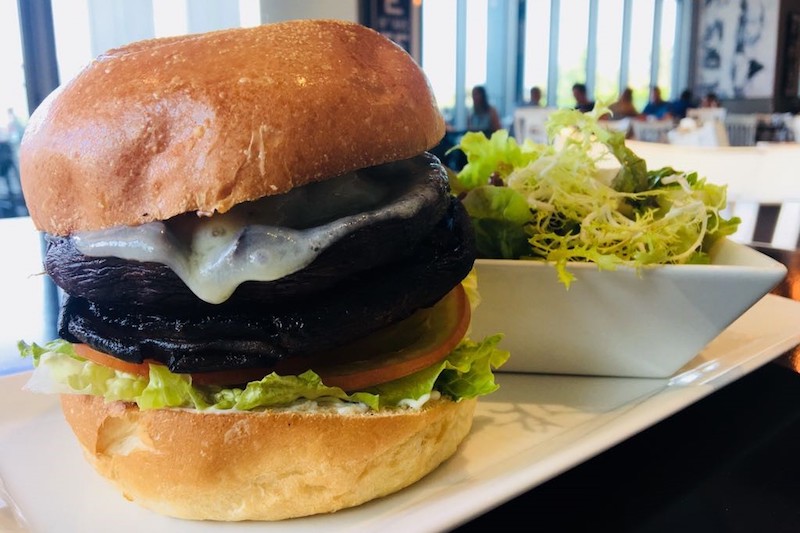 Best of
Eat & Drink
Restaurants
EDITOR’S PICKS
Ramadan in Dubai: 38 iftars to try
READ MORE
Where can Dubai residents travel? Check out these 14 destinations
READ MORE
Rumours, facts and reveals: New Abu Dhabi bars and restaurants
READ MORE
UAE announces reduced working hours for Ramadan 2021
READ MORE
MOST POPULAR
Dubai Sports World is back with a range of activities to help you stay active
8 of Dubai's best authentic pizza spots
Sheikh Hamdan: Dubai will soon be home to self-driving taxis
Updated Ramadan hours for parking, Darb toll and buses in Abu Dhabi
10 of the most Instagrammable cafes in Dubai right now
YOU SHOULD CHECK OUT
Our website uses cookies and other similar technologies to improve our site and your online experience. By continuing to use our website you consent to cookies being used. Read our privacy policy here.