Dubai won the right to host the World Expo in 2020 and showed everyone exactly how to celebrate with a stunning fireworks display in Downtown on Wednesday night.

But while the pyrotechnics around the Burj Khalifa captivated the crowd long into the night, it is a video that has emerged on Instagram which is getting tongues wagging the morning after.

Appearing on the account of @Faz3 , better known as Sheikh Hamdan, the Crown Prince of Dubai, it shows the 31-year-old waving a flag from the very top of the world’s tallest building. Shot earlier in the day, the footage has gone viral since the announcement of Dubai’s triumph.

With his feet safely back on solid ground, he later hailed the Emirate’s awesome achievement in beating Brazil, Turkey and Russia in the awarding of Expo2020, becoming the first city in the Middle East and North Africa region to stage the prestigious event in it’s 150-year history.

He said: “The milestone achievement marks a new phase in the UAE’s and Dubai’s economic development drive. It represents an acknowledgement of our beloved country’s ability to bring about positive change regionally and internationally. Our young country boasts renowned global presence. We have set a comprehensive strategy that aligns with our aspiration for more progress.” 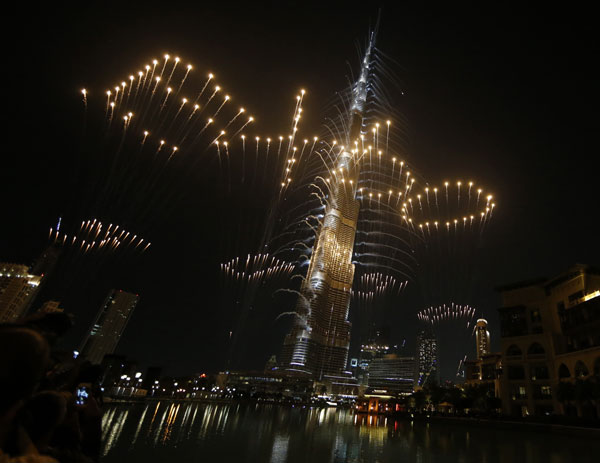 Meanwhile, UAE Vice President, Prime Minister and Ruler of Dubai HH Sheikh Mohammed bin Rashid Al Maktoum, added: “It is by the unwavering efforts of the leadership and the people of the UAE that this aspiration became reality. Our goal is to build a better future for the region’s youth. The UAE will achieve it through collaboration and inspiration at the event. Dubai Expo 2020 will breathe new life into the ancient role of the Middle East as a melting pot for cultures and creativity.”

On Twitter, he posted: “To all people in the UAE: your support and enthusiasm fuelled our victory at Dubai Expo 2020. Today, you are all champions.”

Dubai’s triumph was announced at around 8.30pm following several hours of voting in Paris.

To find out what the victory will mean for Dubai, click here for our quickfire guide.